Inspired by the proliferation of AI and the growing integration between humanity and technology, UK prog metal quartet Shattered Skies have released a new video single titled “Born of Solder.” Watch it below.

Penned from the perspective of a person yearning to rid themselves of what Shattered Skies refer to as “the fallible and impermanent human form,” the band’s latest single explores the not-so-impossible concept of replacing the human anatomy with machinery.

Indeed, with the reported rise in popularity of the RFID microchip in Sweden last year (along with other, smaller circles), the concept of body modification with technology is slowly breaching the realms of science fiction into actuality. However, Shattered Skies‘ latest single also warns of the potential to become obsessed with this being the way forward for humanity in general, and the dangers of seeking to convert others in a cult-like manner.

“It’s not really a political point or trying to say it’s right or wrong,” says band multi-instrumentalist Ian Rockett. ”I just thought it made for a cool lyrical concept that mirrors the way humanity is inevitably going in the long run, as biotechnology, AI and so on gets more and more integrated into our daily lives in the years to come.”

Of the accompanying music video for “Born of Solder,” Rockett explains:

“We went for a simplistic video to showcase some of the unorthodox playing in this song. I used a lot of unusual, pick-less approaches in the guitar parts for this song, including a technique in the main riff and verse that I picked up from watching Mudvayne‘s bassist Ryan Martinie over the years. He has this percussive, hammering-style technique he uses on the strings that I always thought was super cool, so I used that on guitar for this track. We even gave it the working title ‘Vodka Martinie’.“

Rockett continues to reveal that it’s not just the lyrics of “Born of Solder” that are inspired by the combined power of man and machine, either. The band’s latest single features a guitar/bass tapping duet that was composed entirely on musical software before being translated – painstakingly – into an organic performance.

“This part made for a real challenge to physically play when it came to tracking it. We wanted something sort of ‘inhuman’, machine-like and glitchy…so it turned out really bizarre and complex.“

Shattered Skies‘ latest single “Born of Solder” is available to stream and purchase via Spotify and Bandcamp. 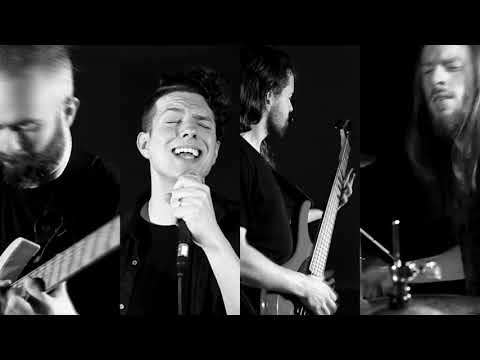