Floyd
May 2 edited May 2 in RSS Feeds
The 1984 mockumentary about a band's struggles on the road hit home for many musicians. For many musicians, the 1984 mockumentary This Is Spinal Tap hit close to home because they'd lived out their own versions of the mishaps the fictional titular band struggled with in the movie. Over the years, we've collected dozens of Real-Life Spinal Tap Stories. Fittingly, many of them take place onstage, with equipment failures and wardrobe malfunctions, but there are also some behind-the-scenes problems and even a few that deal with various bodily functions. We've collected our favorites below in 17 Hilarious Real-Life Rock Star 'Spinal Tap' Stories.

AC/DC Get Stuck in Traffic

It took a second for AC/DC singer Brian Johnson to decide which story to tell us (when you're in AC/DC, you log a lot of them), but eventually he and guitarist Angus Young remembered the immediate aftermath of a Scandinavian show on the Black Ice tour, where the band ran to the bus in an effort to avoid getting stuck in traffic. They got there in time and started to move, but instead of turning right, the bus turned left - directly into the line of stuck traffic.
(Read the full story here) 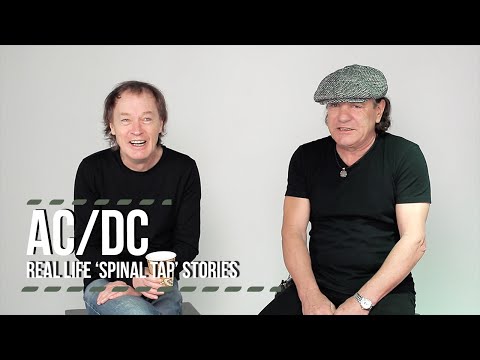