Floyd
May 3 edited May 3 in RSS Feeds
Lewis tells Stevic MacKay he's flattered by the cover.
In these times of Covid-19 self isolation, covers and Zoom chats have become all the rage. Twelve Foot Ninja managed to make good on both accounts, delivering a wonderfully weird cover of the Huey Lewis & the News '80s hit, "Stuck With You," then setting up a chat with Lewis himself.

"No doubt a lot of people are 'stuck' with each other due to Covid-19 ...So we thought, f!@# it! Let's bloody do a version of the great Huey Lewis and the News classic, 'Stuck with You,'" stated the band on their initial video posting, adding they filmed it via Zoom for zero dollars.

Having some fun with the video, the guys employed a number of filters, with Nik Barker quickly becoming a roll of singing toilet paper, drummer Shane Russell sporting a flashy eye cover, guitarist Steve "Stevic" MacKay appearing in distorted body types and fellow guitarist Rohan Hayes just having a blast surrounded by a berry print. You'll also see the guys turn into dancing bananas and avocados as well as other odd filter looks.

As for the song, it's also chameleon like in nature. The track starts off poppy and bouncy, much like the Lewis original, but starts to evolve into something heavier and grittier with the addition of guitars. There's a brief detour into something more electronic in approach, before it all wraps up going full metal with screams, gutturals and a guitar solo.

In addition to releasing the song, Twelve Foot Ninja guitarist Stevic MacKay set up a video chat with Huey Lewis that can be seen below. "I'm flattered that you covered our song," said Lewis, with MacKay admitting to being the fanboy in the group.

"I've been a huge fan for ages, and I drive everyone on the tour bus crazy playing Huey Lewis and the News flat out. I sort of got the moniker Patrick Bateman [Christian Bale in American Psycho]," said MacKay.

"You guys play great and I love your guitar solo in the thing," said Lewis, later adding that he thought they "killed it." Check out the full chat and watch the video below. 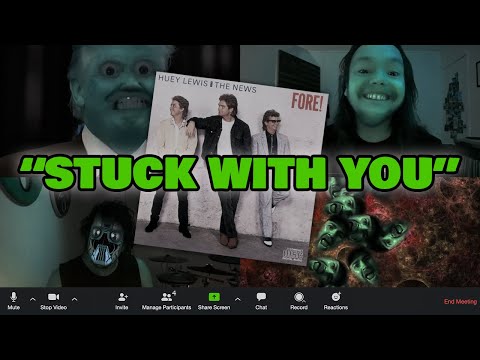