Cosmic Cratedigging – introducing our FREE Light In The Attic CD! 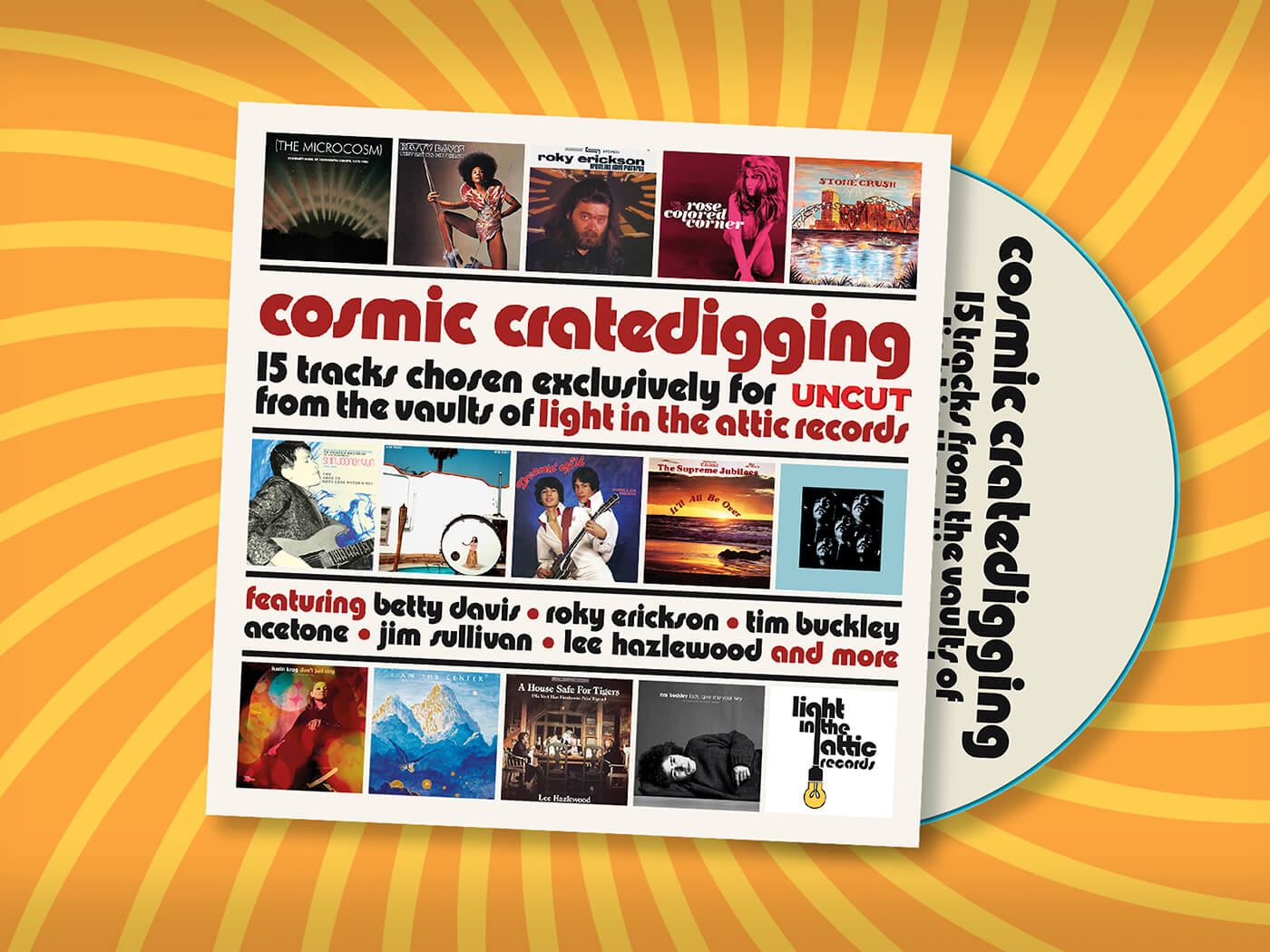 This month’s issue of Uncut – in shops now or available to order online by clicking here – comes with a free CD entitled Cosmic Cratedigging, featuring 15 mindblowing tracks from the vaults of top reissue label Light In The Attic.

Since emerging in Seattle in 2002, Light In The Attic Records have specialised in spectacular reissues of undervalued records by Lee Hazlewood, Rodriguez, Michael Chapman and more. Yet they’ve also made it their mission to unearth private-press marvels and the finest unreleased tapes, resulting in fascinating releases by the likes of Donnie & Joe Emerson, Lewis and The Supreme Jubilees.

They’re one of our favourite labels, so for this month’s CD they allowed us to raid their archives to assemble these 15 out-there tracks: there’s psychedelic soul, avant-garde pop, weird folk, kosmische electronics and experimental jazz from around the globe, all somewhat lost on original release. We hope you enjoy the journey.

MATT SULLIVAN: In 2016, Light in the Attic released The Microcosm, a comp showcasing European artists exploring ambient, krautrock and cosmic sounds, including this mesmerising track, recorded at Karl’s studio in Bavaria in 1983. In Douglas McGowan’s liner notes, Lothar describes the group’s sound as “timeless music, which can help anyone to recharge and help the healing process”.

MS: Betty’s one of those rare artists aeons ahead of her time. She truly pushed boundaries with her unbending DIY ethic. Her sacrifices paved the way for so many artists to come. Our journey with Betty started when we met John Ballon, a Betty fanatic and lovely human, who located Betty, along with more than $40,000 in unpaid royalties. John didn’t take a penny. He just wanted to make sure Betty was taken care of. Anytime I make a mix, this track’s always included.

3 Roky Erickson And The Aliens

MS: In 2013, we were honoured to re-release a handful of Roky’s pinnacle solo LPs, including Gremlins Have Pictures featuring “Bermuda”, which originally appeared as an early 45 on Rhino back in ’77. We’re currently working on a number of Roky-related projects for 2021. We miss you, Roky.

MS: Lynn became the first lady barber in LA, just as long hair on men became hip. By day she was styling The Byrds and The Monkees. At night, she’d practise her songs in the closet once her kids fell asleep. She recorded this killer 45 for Lee Hazlewood’s LHI label in 1967. Nearly 50 years later, Hazlewood fanatic Hunter Lea tracked down Lynn at her home in Glendale, where she blew our minds with her unheard 1966 demos. Now 80, she’s still writing phenomenal songs.

“What Does It Take To Know (A Woman Like You)”

MS: In 2009, my wife and I spent a magical honeymoon in Memphis for the premiere of her documentary Wheedle’s Groove, about the Seattle soul scene. Since then I’ve been back to Memphis half a dozen times, each trip centred around friend, DJ and record collector Daniel Mathiss. Fifteen years ago, Daniel, along with Chad Weekley, started documenting the city’s late-’70s to mid-’80s soul scene, digging up ultra-rare 45s including this spaced-out single.

MS: Inspired by jazz, soul and traditional Korean music, Shin started his career in the mid-’50s. He would release dozens of records and produce countless artists. In 1972, the military dictatorship of Park Chung-hee requested that Shin write a song in praise of the president. In protest, Shin recorded this, about the beauty of the people and the land, not the government. This made Shin enemy No 1 and his career was snuffed out. Decades later, he’s now regarded as the ‘Godfather of Korean Rock’.

A sublime ambient work from the Venetian polymath

MS: Recorded in 1989, “Clouds” originally appeared on a split release with Charles Hayward of This Heat. For the release, they were each asked to write about the waterways of their respective cities, Venice and London. Like every other record in Gigi’s catalogue, this track is absolutely stunning, some of the most beautiful, otherworldly music ever recorded. “Clouds” would later be sampled by Björk for “It’s In Our Hands”.

An unreleased highlight from this hushed, eerie group

MS: Writer and friend Sam Sweet spent a decade writing a brilliant book, Hadley Lee Lightcap, about LA’s Acetone. During Sam’s research, the band opened their archive for him, sharing dozens of unheard cassette recordings. One night Sam drove me around LA, retracing the band’s old haunts, while we listened to those cassettes and chatted about LITA possibly releasing a companion soundtrack to Sam’s book. “Shore Power” came on and I said, “I’m in.” For me, Acetone is true soul music: genuine, pure and brutally honest.

This title track from Sullivan’s 1969 debut remains a delight

MS: What started as a random find on a blog over a decade ago has turned into an obsession for all of us at LITA. Back in ’69, Jim was the nightly entertainment at The Raft in Malibu and soon after found himself in the studio with some of the Wrecking Crew recording UFO. Six years later, he would vanish in the New Mexico desert, a case that remains unsolved. “UFO” is in my top 2 favourite LITA releases of all time.

“Give Me The Chance”

An earthy, catchy and downright weird track from the ultimate private-press heroes

MS: At LITA, we remain champions of the underdog and no one sums that up better than Donnie & Joe, two farm kids from eastern Washington State. In 1978, their dad took out a second mortgage to build a studio on the farm for his sons, who would, after their chores, end up making a heartfelt LP of bedroom pop, raw funk and yacht rock. They played at the county fair, their classmates laughed, and the family lost most of the farm. Thirty years later, friend and record collector Jack Fleischer stumbled upon the LP at a Spokane thrift store and blew all our minds.

A playful, freeform 1968 track from the Norwegian jazz singer

MS: Friend and writer Pat Thomas first played us Karin’s music a number of years ago, and eventually produced LITA’s Karin Krog anthology. I don’t know if I’d ever heard anything quite like it.

For more than 60 years, Karin has continued to experiment with solo vocals run through electronics, and performs with progressive electronic jazz combos and traditional acoustic groups as well – from John Surman to Dexter Gordon.

A gorgeous and rare gospel-soul cut

MS: Formed in Fresno, California, in the late ’70s, The Supreme Jubilees comprised two families who recorded the private-press masterpiece It’ll All Be Over, an apocalyptic gospel LP with a sound that could only be made from sibling harmonies. In our current world quarantine, you do have to hope that one day, “It’ll all be over/And we won’t have to cry no more.”

An overlooked masterpiece from one of the late great’s soundtracks

MS: In the early ’70s, Lee Hazlewood moved to Sweden and struck up a life-long friendship with filmmaker Torbjörn Axelman. Together they made a number of films, including A House Safe For Tigers, a semi-documentary. In it, Lee runs a marathon, tells anecdotes about a bum who cured his stutter, and convinces a group of Swedish children to take sides against Nixon.

“I Never Asked To Be Your Mountain”

A powerful and sparse demo of the Goodbye And Hello highlight

MS: Tim Buckley’s lyricist, Larry Beckett, and Jerry Yester, the producer of Goodbye And Hello, held pre-album acoustic demos from 1967 that LITA uncovered for the first time. Larry told reissue producer Pat Thomas, “Tim did every kind of music. He could sing a country song or blues or folk-rock, it didn’t matter. He loved everything and he could have sung opera had he tried.”

A beautiful collision between new age, ambient and modern classical

MS: There are few genres as misunderstood as new age. At its purest phase, it is great American folk art. At its most painful phase: elevator music. Around 2011, record collector and reissue producer Douglas McGowan put together I Am The Center for LITA, which became the first proper anthology of the new age sound, focused on artists that shaped the genre before it became big business. One of the 20 featured was renowned classical violinist and composer Daniel Kobialka and this gorgeous track, originally self-released in 1983. These are much-needed sounds for today’s trying times.