Tony Visconti on T.Rex and the birth of glam: “People were ready for Marc” 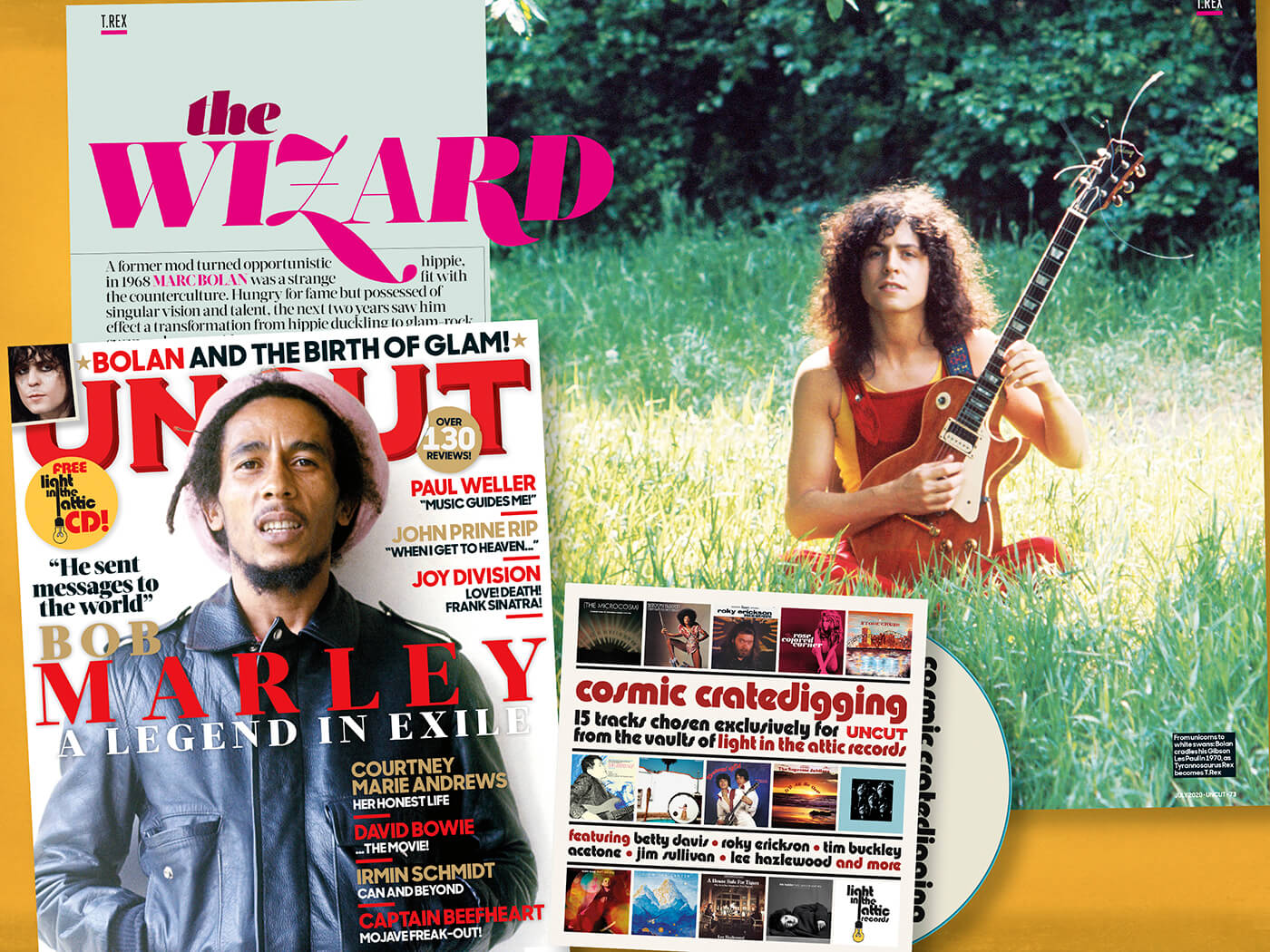 The latest issue of Uncut – in shops now and available to buy online by clicking here – includes the colourful tale of Marc Bolan’s transformation from hippie duckling to glam-rock swan, as he cast aside sidemen, managers, loyal supporters, and the ‘Tyrannosaurus’ name on his quest for mass appeal with T.Rex. Long-time producer Tony Visconti, friends and former associates relate for John Robinson the triumph of one of music’s most complex characters as he ushered in the glam rock era. Here’s an extract:

The broadcaster Bob Harris saw Marc Bolan become the king of glam rock from the back of a car in Glasgow, in the spring of 1971. After the No 1 success of “Hot Love”, this was a tour on which he witnessed scenes otherwise familiar only from footage of Beatlemania: police escorts, crushed cars, stampeding fans.

“The first gig was Portsmouth Guildhall,” remembers Harris, then acting as T.Rex’s tour support and MC. “The band finished their set, and we were hanging out. We realised there was a lot of noise in the street – the whole crowd was round the backstage door. Local police had arrived. The whole place was surrounded by girls with scissors trying to get locks of Marc’s hair. What I remember is a lot of stainless steel flashing around at eye level. It was madness!”

It wasn’t until 10 days later and the band’s arrival in Scotland, however, that Harris saw the newspaper headline that gave a name to what he was witnessing: “T.RexTASY!” A phenomenon so vivid it waited for colour television to arrive, glam had been born officially on Thursday, March 25, when T.Rex made their second appearance on Top Of The Pops with their single “Hot Love”. On Bolan’s cheeks were splashes of glitter – around which twinkling a robust British rock movement would start to coalesce.

“People were ready for Marc,” says Bolan’s long-time producer, Tony Visconti. “You have to remember: everyone was growing a beard. Musicians were trying to distance themselves from being slick. People were wearing jeans. You’d see people on Top Of The Pops with beards, wearing jeans and flannel T-shirts. Then Marc came along.”

Unbearded, tiny, and visually appealing, Bolan had a youthful beauty but also a winking charisma, suggesting of a more intimate understanding with his young audience. “He was very good-looking,” Visconti continues. “But he was cheeky. He was preening himself to be a rock star. He didn’t do this stuff when I first met him, but he’d probably been working this out in the mirror.”

The former Melody Maker journalist Chris Welch, a long-time Bolan patron, recalls how for Bolan, success was “payback time” for anyone who had ever doubted him. But as sweet as the vindication must have tasted, and as sumptuous the success have felt, it wasn’t quite as momentous or interesting as the journey that had taken him to the top.