Inside our new Drag City CD 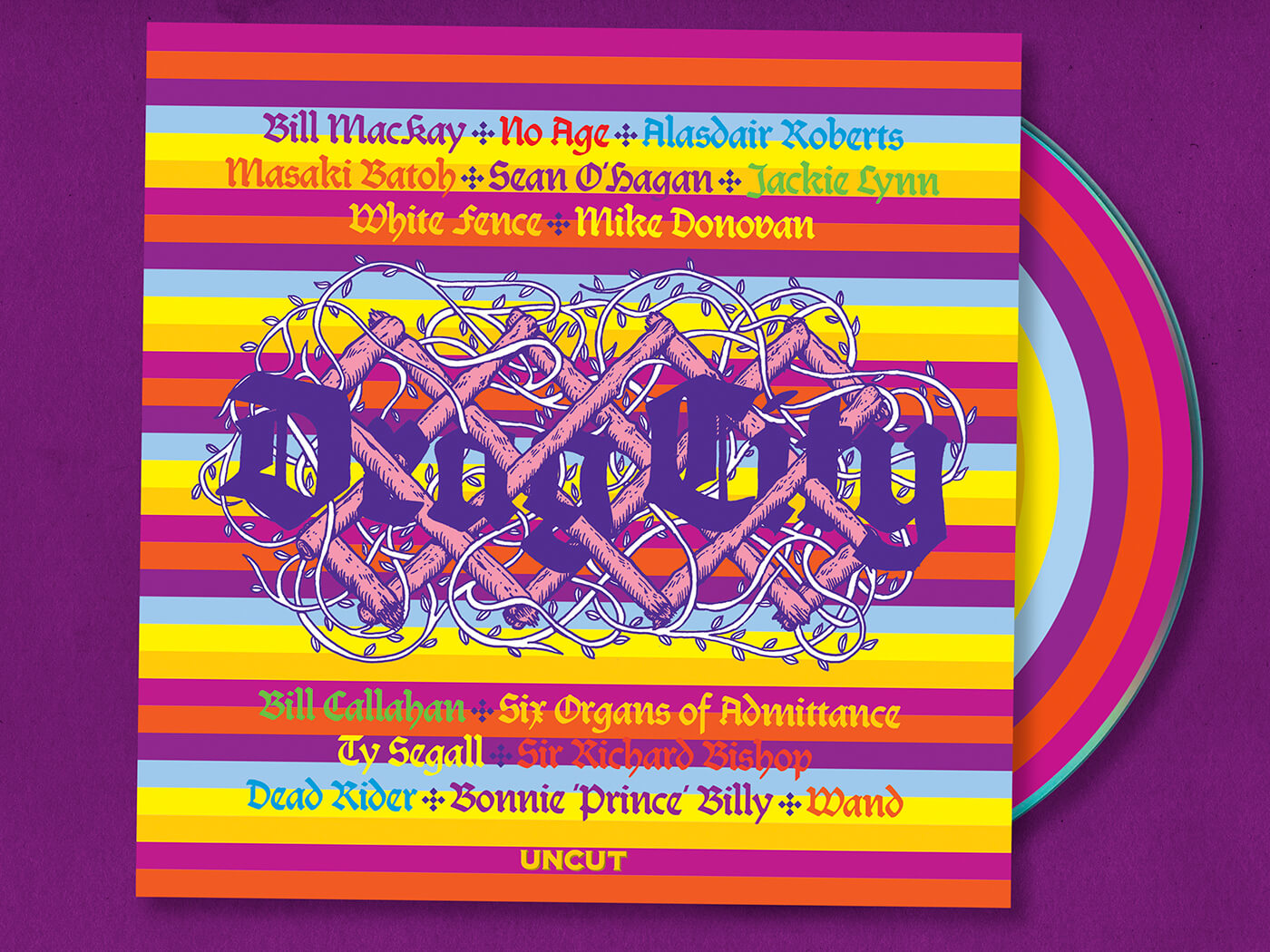 The current issue of Uncut comes with a free CD of 15 incredible tracks from Drag City, one of our very favourite labels.

The issue, dated October 2020, is out now and available to buy here.

From their scuzzy early days with Royal Trux, Smog, Palace Brothers and Pavement, to their more expansive roster today – still featuring a transformed Bill Callahan and Will Oldham – Drag City have released music by many of our most beloved artists over the last three decades.

To celebrate their stellar form, and Callahan’s new Gold Record, we asked the Chicago crew to put together a compilation of their own favourite releases from the last 12 months. Here, then, is a survey of Drag City today, an eclectic and global sonic stew: one can drop in on Ty Segall in Laurel Canyon, eavesdrop on Masaki Batoh in Tokyo or hang out with Alasdair Roberts in Glasgow. There’s also a very fine taster from Callahan’s new LP, a modern classic from Bonnie ‘Prince’ Billy’s long-awaited 2019 album I Made A Place and much more from Wand, Jackie Lynn, Tim Presley and others. While you track down a copy of the latest issue and ready your stereo, here’s Drag City’s Rian Murphy to guide you through the 15 tracks…

A dusty, overdriven instrumental from the guitarist and Ryley Walker collaborator

RIAN MURPHY: There’s always a lovely conversation to be had whenever we see Bill Mackay. Then he drowns the chatter with his beautiful guitar sounds, which he’s been playing around here (and there, but never everywhere) for years… The first solo record he did with us had a pure Americana vibe, but by the time of his second one, he seemed less moored to a set archetype, with an acidic strain roughening his sound. That’s what you get here, imagining the land before a land of Americana. But post-acid.

RM: Their art-punk aligns with our own sense of the conceptual – like, taking the trope of a kind of music and turning it inside out, then detailing the effect of that with the things you find having reversed it. No Age get an amazing amount of sounds for a guitar, drums and vocals duo – their opus just kept terraforming, and the two albums they’ve given us have really different approaches from their others, or anyone else’s.

RM: We first heard Alasdair 25 years ago – really? Really. Ali’s a passionate guy with what seems to us damn Americans to be a very reserved Scottish manner. He goes deep into songs, finding places for the new information he’s been absorbing. It may make any music compelling, but to have him weave the range of stuff in his mind through the cloth of traditional music generates something completely unique. He’s boiling the music of a thousand years into something meant expressly for now. To be taken internally, on an empty stomach.

RM: When the Ghost records started coming over on import in the early ’90s, we were instantly hooked, so it’s hard to imagine not getting excited about anything Batoh does. We’ve spent over 25 years with that rare joy-terror of not knowing what the fuck will come next! His sense of commitment is totally inspiring to us, and he manages to weave mystery into his music in a way very few ever have – ie, effectively.

RM: When The High Llamas, and Sean’s work with Stereolab, were first coming out, it was a special thrill hearing someone reach for these kind of chords and get those kinds of sounds with them; it still is. We did the Turn On record that Sean and Tim Gane did together, and then High Llamas records from ’99, after their V2 deal ended. Whether they’re doing neo-bossa, keys-and-ring-modulation or chamber pop, Sean’s always subtly shifting emphases in the sound to keep it fresh – and his solo record feels like a really bumpin’ departure from the Llamas’ traditional elements.

RM: We’ve been obsessed with Bitchin’ Bajas and Circuit Des Yeux for years, then when the first Jackie Lynn record dropped, we were gobsmacked at the pure synthesis of that voice with the post-Suicide musical modes. Then the seas parted and we got the opportunity to do the new Jackie Lynn LP, which grows in leaps and bounds on every listen. The synthy dance elements have blown up into a huge production sound, but not without the deep emotional currents getting deeper too.

A reliably excellent cut from Presley’s latest album, I Have To Feed Larry’s Hawk

RM: Here’s Tim in what we think of as “post-White Fence” mode. People really dug the swirly garage psych of the WF records, but it’s the songs underneath, the feeling and the way his expression is both blithe and oblique, which is to our ears the key. He’s been dialed in as a writer since Cyclops Reap – just one killer album after another. This number’s a pleasurable pop ditty suddenly metastasizing with unknown depths.

RM: Sic Alps, The Peacers and Mike’s solo works have produced tons of true favourites over the years. Like Tim Presley, Mike’s able to channel stuff that in anybody else’s hands might seem retro, but from him, it’s on an alternate timeline that pours out effortlessly, guitar pop loaded with irreverence, melodicism and hooks and the mysterious presence of something meta going down. Here, it’s a Sister Lovers feeling, but Mike’s songs and sound occupy their own space with great intimacy and authority.

The latest transmission from BC, now stunningly prolific

RM: We started working with Bill in his Smog guise in 1991, when there were only a couple of artists on the label. Through circumstance and action, he’s regularly helped set the tone for what some might consider to be ‘Drag City’ – us included! Part of that means evolving in a transformative way, all while maintaining an impossible-to-put-one’s-finger-on continuity – you know, like you do! Here, Bill’s got the kind of song he might have sung back in the Smog days, about a tough relationship maybe not working, but breathing a sense of life and redemption that alters everything.

If every Segall album is in part conceptual, First Taste is the strictest – no guitars! Happily, rock still ensues

RM: It’s been almost 10 years since we started working with Ty and it doesn’t feel like it at all. He’s got a rap for putting out tons of records; if only it were 1966 again! Ty’s always looking for two things: rock and something different from that, and he always gets them. On every record, there’s at least a couple singles, and this one we were hoping to hit like Hotlegs’ “Neanderthal Man”. It does every time we spin it anyway – thanks for nothing, England!

A cut from this February’s Companion Rises, one of Ben Chasny’s bravest and most beautiful records

RM: Ben Chasny’s early Six Organs records – and natively unique guitar style – were such impactful and essential listens, we knew we had to try and get with him to make some stuff for us. That was 15 years ago already! The man just keeps moving. He’s got all the great traits we never think to look for but always end up finding in our (and any) great artists – super-restless, quick to fire up with fascination, enthusiasm and ideas and irascible as fuck at the same time. His last couple of records make us so happy, and can you imagine how tough a feat that is?

THE COMING OF THE RATS

A haunting instrumental from the Sun City Girls/Rangda guitar wrangler

RM: The riff starts and you’re like, ‘Sounds like chill-out time. Cool, but the song’s called “The Coming Of The Rats”, so…’ Rick Bishop is just funny, and the combination of his humour with the largely non-hilarious-and-to-our-ears virtuosic music he plays just makes it twice as fun! The whole thing is ripe and juicy with streams of contradiction having as much to do with visceral pleasure as an appreciation for his ascetic guitaring skills.

A digital-only release from the experimental Chicago crew

RM: We first heard Todd Rittmann in US Maple 150 years ago, playing the future backwards to bring it to us where we stood at the end of the 20th century. His stuff plays a lot more clearly today, which is not to say that he’s softened his approach to confounding as a basic principle in music. Doesn’t bother us a bit – it always goes hand-in-hand with his fractured funk and blues licks and sudden rock rave-ups, as if it were just another night of rock’n’roll.

I HAVE MADE A PLACE

RM: Will’s said that he’d heard the first Silver Jews record, felt like he could make music for a label that released that and sent us a tape. That was in 1992. Since then, working with him has changed what we think we’re doing so many times – that’s just the way he works, and now so do we, whether we understand it or not. I Made A Place came out after a six-year gap and with it songs that we truly believe will be among his most enduring. Literal magic!

RM: Ty Segall introduced us to Wand in 2014. Playing their debut back-to-back with their latest, Laughing Matter, is like playing Meat Puppets against Up On The Sun – you never saw it coming and it happened so fucking fast. They were one thing, then they were another. If we’re not all dead by next year (relax, that’s sarcasm), Wand bode well for the future, as this cut brings us full-circle, measuring some truths about America and Americana in the provocative form of new music. May it always be. Also post-acid.