Staff member
A seasoned supergroup moulded from the ashes of classic “heavy-blues” rock outfit FREE and others, BAD COMPANY took their moniker from a recent cult western movie starring Jeff Bridges. Nearly on a par with LED ZEPPELIN whom they shared a manager (Peter Grant) and a record label (Swan Song), vocalist Paul Rodgers, drummer Simon Kirke, guitarist Mick Ralphs (from MOTT THE HOOPLE) and bassist Boz Burrell (ex-KING CRIMSON) first got together towards the end of summer 1973.

Almost immediately, the group’s blues-based arena-rock approach shifted copies of their debut Top 5 single, `Can’t Get Enough’, while its eponymous parent album BAD COMPANY (1974) {*8} raced up to the top slot (No.3 in the UK). Rowdy and raucous, though stripped-back to the bare essentials, the record set the blueprint: driving music par excellence with Rodgers’ heavy, soulful vocals set against a rock solid musical backdrop. These were songs that were built to last, and indeed they have; it’s just a pity the cock-rock lyrics haven’t aged quite so well. Then again, with such timeless melodic fare as the aforementioned 45, the eponymous `Bad Company’, the softer `Seagull’ and `Movin’ On’ (a US-only hit), maybe the lyrics are beside the point – it was the 70s after all.
Transatlantic Top 3 sophomore set STRAIGHT SHOOTER (1975) {*8} was a bit tougher, yet ultimately more of the same. No bad thing, with classic rock staples `Good Lovin’ Gone Bad’ and `Feel Like Makin’ Love’ (major global hits tracks 1 & 2 here) on a par with FREE’s best efforts. Equally deserving of pop chart singles status, treasure tracks `Shooting Star’ and `Deal With The Preacher’ were hard-rock ballads regarded in the highest echelons, while final track `Call On Me’ was just gorgeous.

Within such a limited framework, however, there was never much room for experimentation and it was probably inevitable that BAD COMPANY would begin to tread water as they waded through the murky second half/tail end of the 70s. Split between the songs of Rodgers or Ralphs (with the exception of US Top 20 Leiber-Stoller-Pomus ditty `Young Blood’), RUN WITH THE PACK (1976) {*5} was the first set to take the multi-platinum-selling quartet on a downward spiral; both flop 45s `Honey Child’ and the one-that-got-away title track (and Rodgers’ `Do Right By Your Woman’) probably saved the album from a critical cut-throat.
Top 20 album BURNIN’ SKY (1977) {*4} took the brunt of the fall-out and set against the day’s new wave/punk backdrop, it was clear BAD CO.’s music was staid and formulaic.

Bruised but not completely battered, the gun-shot weary quartet dusted themselves down for two further stabs at the big time through DESOLATION ANGELS (1979) {*6} – featuring US Top 20 hit `Rock’n’Roll Fantasy’ – and their 1982 parting shot ROUGH DIAMONDS {*4}. Nevertheless, they continued to sell bucket-loads of records and put bums on seats right up until PAUL RODGERS decided a project with JIMMY PAGE (The Firm) might be a better option.

BAD COMPANY (albeit Ralphs and Kirke) re-formed four years later with ex-TED NUGENT frontman Brian Howe on board, alongside keyboard player Greg Dechert and bassist Steve Price; the latter superseding Burrell who was mentioned on their “comeback” album FAME AND FORTUNE (1986) {*3} for some reason. Produced by Keith Olsen and augmented on songwriting duties by FOREIGNER’s Mick Jones, the good company they were keeping should’ve presented the quintet with better results – they could hardly buy a hit at this stage. Ditto the polished DANGEROUS AGE (1988) {*5}, although the addition of auxiliary producer Terry Thomas (to songwriters Howe and Ralphs) was an inspired idea resulting in an album that sold moderately achieving renewed interest in the process.
Rifling through numerous personnel changes before (and after) album number nine HOLY WATER (1990) {*5}, BAD COMPANY proved they had staying power at least, finding commercial solace and lofty US chart positions for both the set and subsequent single `If You Needed Somebody’; the equally effective `Walk Through Fire’ also hit the same Top 30 a year on while Ralphs was taking a break for domestic reasons, Geoff Whitehorn deputised until his return for 1992’s back-to-back platinum set HERE COMES TROUBLE {*4}. Aided by US Top 40 entry `How About That’ (and a few other formulaic cuts including minor hit `This Could Be The One’), the album did little to regain critical favour. Seasoned guitarist Dave Colwell and veteran bassist Rick Wills (from just about every band asunder) were added; BAD COMPANY (Howe, Ralphs and Kirke) were again at their lowest point on messed-up concert piece WHAT YOU HEAR IS WHAT YOU GET: THE BEST OF BAD COMPANY – LIVE (1993) {*2} – the warning was there for all to see.

Come the mid-90s and with a new frontman Robert Hart in tow, the ironically-titled COMPANY OF STRANGERS (1995) {*3} was hardly the comeback they’d expected, as was the mixture of old and new by way of STORIES TOLD & UNTOLD (1996) {*3}.

With things sliding downhill very quickly, 1998 saw the return of solo star Paul Rodgers to the fold as both Ralphs (and short-stay Burrell left again, as did Wills); Kirke and Colwell were joined by Scottish bassist Jaz Lochrie (formerly of mid-80s pop hit-makers Go West). Fans were happier with their main man idol back in the side as CD/DVD MERCHANTS OF COOL: IN CONCERT (2002) {*5} would suffice.

With the tragic news that Boz had died on 21st September 2006, Rodgers again returned, this time from a steady stint with QUEEN, to re-join both Ralphs and Kirke (plus live additions Howard Leese and Lynn Sorensen), and although there was no sign of a studio comeback there were a plethora of live shows and a handful of concert triple-mini-CDs headed by LIVE IN THE UK, 11th APRIL 2010, WEMBLEY ARENA (2010) {*6}; issued as an abridged “Extended Version” in the states. Bassist Todd Ronning duly replaced Ralphs. 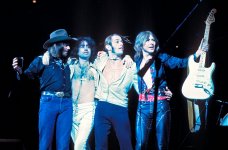 
https://youtube.com/playlist?list=OLAK5uy_kdGScOXK8kfaDmZs2qrwgyY_kUOiPfD4A
"Everything is relative"
B

Yeah! The second best band to record on the Swan Song record label. Straight Shooter might be my favorite album. "Good Lovin Gone Bad" is a fantastic opener!. It was the first of their albums I bought. Paul Rodgers albums with the band are my preference.
B

This is another instance when I have all the good albums on vinyl and also all of their albums on an unauthorized collection of compact discs. A Russian collection of two albums on one disc. I'll have attach some digital images sometime so some of can see theses collections.
Brian Howe albums were ok.
I also have a live bootlegged performance from 1976 and most of their releases uploaded to my iPhone.

BeatleMatt said:
This is another instance when I have all the good albums on vinyl and also all of their albums on an unauthorized collection of compact discs. A Russian collection of two albums on one disc. I'll have attach some digital images sometime so some of can see theses collections.
Brian Howe albums were ok.
I also have a live bootlegged performance from 1976 and most of their releases uploaded to my iPhone.
Click to expand...

Here are some examples of the unauthorized music collections I have.
There were several collections like these available on eBay maybe early 2000. I bought a bunch.
This is the Bad Company collection. Eight studio albums on four compact discs. They all sound great and the packaging looks just as good. They were licensed only in the Russian Federation, which does not mean much but the collections were so unique and complete, I had to own several. I bought collections like these of The Beatles, Credence Clearwater Revival, Paul McCartney, George Harrison, John Lennon, Kiss, Slade, Yes, Jimi Hendrix

Ok. Once collectors went crazy over the Japanese editions of albums....most of these had inedited bonus tracks on them. When the demand was high enuff, they sold for a fortune.
"Everything is relative"
B The Beatles, two albums on one CD, Revolver / Magical Mystery Tour. It is under the Parlephone label, and imported from Russia. It is preowned. The jewel case is in great condition, along with the CD.
www.ebay.com
Here is an example of one of the discs in the Beatles collection.
As I recall, maybe 20 or more years ago, there were just a few peddlers selling these collections on eBay and there were many, many different artists available. As somewhat of a collector but mostly a fan of music, I simple could not resist. I bought The Beatles collection first to see and hear how good they were. Then I jumped in the deep end of the pool and bought at least eight other collections. These are really great.
B

I bought two Bad Company collections, leaving one unopened. At the time, they really were not that expensive for the number of discs in the collections and the overall package. Understand, most of these collections I bought were basically the entire catalog of the artist on compact disc. I think Holy Water was exclude from the collection for some reason but otherwise it was all the other eight studio albums packaged onto four discs and sound just like original releases.

∆∆∆ Did you get any bonus trax with these collections ?
"Everything is relative"
B

Many of the Beatles, McCartney collections have bonus tracks. Collections from Yes, Bad Company, and Kiss for instance had time limitations from original releases.

I always choose boots and collections like the ones you mentioned only if they have bonus trax.
"Everything is relative"
B

Do you have any of these "Russian Rare" collections? Any artist or band?

Nope. I went with the tide and got many Japanese editions (with the writing in Japanese along the side) e.g. Cheap Trick , etc.
"Everything is relative"

Played this album(tape actually) endlessly in the summer of 78' at "Basic" & "Tech-school", USAF!!

BeatleMatt said:
Do you have any of these "Russian Rare" collections? Any artist or band?
Click to expand...