Staff member
Inconsistent albums have definitely been a bit of a Hawkwind trademark over their many years, probably from about the late 70's onwards! You'd always get a couple of killer tracks, a few decent ones, a few duds, with the obligatory baffling remakes of previous tracks as well. Thankfully, 1995's `Alien 4' came at a time in the early Nineties when the band were in something of a period of renewed inspiration, with albums like `Space Bandits' and `Electric Teepee' being a step up in quality from several of the 80's releases. It incorporates many of the best elements of Hawkwind sounds past and present, and that includes sleek spacey instrumentals, plodding hard-rockers, ambient passages, spoken word diversions and even some industrial programming they also explored on the `It Is The Business...' album.

The established members - David Brock, Alan Davey and Richard Chadwick - were joined here by Ron Tree, more of a festival/performance artist than a truly competent singer, but he brings flair and colourful personality to the music. Opener `Abducted' is a spoken word passage aiming to capture the spirit of the old Michael Moorcock poems on the earlier albums like `Space Ritual' and `Warrior on the Edge of Time'. It moves straight into `Alien (I Am)', a gutsy memorable rocker with a killer chorus that transitions into a short guitar solo and gliding synth interlude with `Reject Your Human Touch'. Ron's wailing vocals over the relentless cold programmed beats of `Blue Skin' will shred your senses and shatter your sanity, and while `Beam Me Up' starts soothing and introspective, it quickly morphs into a schizophrenic breakdown of ranting vocals and spiky punky outbursts!

`Vega' is a beautiful and blissful ambient floating synth instrumental, `Xenoporph' one of those reliable punky rockers that Hawkwind do so well but with a nice sprightly electric piano solo in the middle over swirling synths that build with heavy riffing guitars in the finale. Instrumental `Journey' begins intimidating but soon turns wondrous, and `Sputnik Stan' is a relentless heavy metal/rock n roll blaster with a bit of menace to the riffing, melting liquid synths dripping all around and a nice dreamy break in the middle (nice thick bass from Alan Davey on both of these too, with a nice melodic solo from him as well on the latter!). Moody instrumental `Kapal' offers dark slinking beats over vocal samples and cold machine programming, and the album (more or less) closes on a Dave Brock punky rapid-fire rocker `Festivals' with a reliable chorus, lovely wavering synth and light reggae-styled groovy bass breaks throughout.

Then, of course, the band throw in some of those baffling covers of earlier Hawkwind pieces. `Death Trap' is from 1979's `PXR5', and while Ron's vocals are certainly deranged enough, the music needed to be a lot more manic and messy to compliment him, and only the raging guitar solo in the closing minute brings the right energy. `Wastelands' (aka `Wastelands of Sleep' from 1988's `The Xenon Codex') barely runs over a minute, but it's still a pretty ambient interlude that segues into `Are You Losing Your Mind?', a delirious re- recording of `The Iron Dream' off 1977's `Quark, Strangeness and Charm' with new spoken words lyrics. All of these remakes are perfectly adequate yet utterly forgettable and add nothing to the main parts of the album. At least they're all lumped together at the end of the disc, so it's best to treat them as mere bonus tracks, skip them and finish on `Festivals' instead.

Although the band would go on to offer many more albums after this, Hawkwind fell back into those annoying inconsistencies once again right from the very next album `Distant Horizons'. They wouldn't see another return to some form until 2010's `Blood of the Earth' and `Onward' two years after that. But while `Alien 4' isn't quite in the same league as their Seventies classics or even Eighties albums like `The Chronicle of the Black Sword (and the heavy live album of it!), there's still plenty of strong material for fans of Hawkwind and their different eras to enjoy. 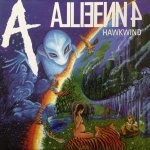