Staff member
How many bands can you think of that's been recording since the beginning of the 1970s entered the 1980s and still make excellent music? Not that many. By 1981, many big name prog rock bands either went pop (like GENESIS) or ceased to exist (YES, ELP). This was also an era where a new version of KING CRIMSON surfaced and gave us "Discipline" that has a much more New Wave feel than what you expected from this band, in the process of alienating a few fans (but to be fair, that album received lots of praise still).

Of course, HAWKWIND not being a major act, refused to make compromises. "Sonic Attack", released late in 1981, is not one of those millions and one useless bootlegs and compilations on obscure labels, but an album of brand-new compositions (with the title track being a remake). Tim Blake and Ginger Baker were gone, with drummer Martin Griffin returning. Dave Broke is here as always. This time, the band went hog-wild on synthesizers, bassist Harvey Bainbridge now doubled on synths, demonstrating he was more than a capable electronic musician (enough where when he left the band in the 1990s, he released a handful of solo albums in the '90s). Novelist Michael Moorcock (who collaborated with HAWKWIND in the past on occasions) even provides some narrations and even vocals.

This album has very strong Orwellian themes, with songs that had themes on surveillance of the citizens, technology taking over, mind control, it's obvious that this band had some real concerns about how society was moving, since this was 1981, during the Thatcher and Reagan-era. I think this album is rather underrated, with some rather exciting and energetic compositions, and a much more trippy album than their previous offering, "Levitation". "Levitation" is downright tame compared with "Sonic Attack"! The album opens up with the title track, which of course, a remake of a Robert Calvert-era spoken dialog piece that dated back to "Space Ritual". Since Calvert was not in the band by this point, it was Harvey Bainbridge doing the spoken dialog, in which he shouts. A rather effective and disturbing piece. "Rocking Paths" is an energetic and exciting rocking piece dominated by guitar while "Psychosonia" is a strange experiment. "Living on a Knife Edge" features lyrics protesting surveillance. "Coded Languages" features Michael Moorcock shouting about rebelling against the establishment, and in the second half he sings. This piece demonstrates that he shouldn't sing as he's not that great of a singer. Some other goodies include "Lost Chances", and "Trans-Dimensional Man". "Virgin of the World" is a strange electronic experiment from Harvey Bainbridge that really trips me out. Since I have the Griffin CD reissue, there might be a couple of bonus cuts that might not be on the original RCA LP, but I'm not sure. My suspicion is "Virgin of the World" was really of their following album, "The Church of Hawkwind" (1982) (I hadn't heard that album yet, and I only own the CD to "Sonic Attack"), because the CD titled the song, "Virgin of the World ("From the Church" of HAWKWIND)". This is a wonderful and exciting album, and often too underrated. 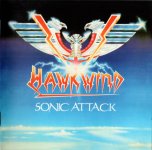