Staff member
"The Xenon Codex" is one of the better 80s Hawkwind albums with very spacey atmospherics and some excellent compositions. The iconic album cover art is striking and overall this has great packaging. The musicianship is well executed here with Harvey Bainbridge's terrific synthesizers, Dave "Dr. Hasbeen" Brock's guitars and synts, Alan Davey's bass, Huw Lloyd Langton's fabulous lead guitar and Danny Thompson's percussion. As with all Hawkwind albums of the 80s the synth dominates but on this album never becomes as tiresome, in fact the lead guitar of Langton is incredible, some of his best work. Having said that, the album still has a lot of medicore moments marring an otherwise excellent album.

'The War I Survived' and 'Wastelands of the Deep' has a familiar sound with trademark echoes on Brock's vocals and very spacey textures and effects. The instrumentals on this album are actually very good such as the keyboard driven melodic 'Lost Chronicles'. The melody resonates well and is one of the better Hawkwind instrumentals especially when the guitar chimes in after the main melody is locked in. The rhythm is moderate tempo and quite relaxing.

'Tides' is an instrumental that begins with waves crashing and seagulls and is a slow paced vehicle for Langton's guitar work. The tranquillity of the piece is quite nice but one longs for the heavier side of Hawkwind.

'Heads' follows with thunder crashes, and meanders along steadily with some odd vocals. Brock sounds great on lines such as "needles are in their flesh" and the repeated "no use for you to weep". The spaciness is everpresent as always, building to an effective sonic crescendo. The distorted guitar sound is very good. 'Neon Skyline' is another highlight with Brock harmonies and a truck load of spacytronics.

'The Mutation Zone' is more hyper weirdness, voice overs, psychedelic textures and tons of sequenced synths. The phased vocals and odd percussion driven music is more like The Residents' style. It is really a techno filler with nothing much to offer becoming wearisome after a while, though the sound at the end is decidedly creepy.

Next is 'E. M.C', and it begins with strange effects, like switching through radio channels, until a synth and guitar riff locks in. This brings the pace back with some innovative riffing and typical layered vocals. One of the best tracks on the album it has the trademark chugging repetitive riffage, but the alien voices could have been replaced by Brock's vocals as they seem rather sparse on this album. The last few tracks in fact are too other worldy to be of interest to music listeners apart from the legion of Hawkwind freaks.

'Sword of the East' is definitely an album highlight with Brock sounding as good as ever, and the rhythm is strong with some innovative horse braying effects that have a creepy effect. The melody is simple but infectious and definitely this is the style that Hawkwind should focus on rather than all that ambiance in the instrumentals. So once again this is a mixed bag as far as Hawkwind go, another album with too much filler and not enough killer. Overall there is enough here to recommend to the Hawkwind space cadet, others may be quite disappointed. 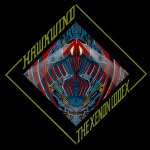