King Crimson - In The Court of the Crimson King

Staff member
While the seeds of progressive rock were sown before In The Court of the Crimson King, with bands like Procol Harum, The Mothers of Invention and The Nice exploring classical elements and extended suites in rock music, it was In The Court of the Crimson King that established the benchmark for the genre. While King Crimson often feel like an experimental band, out of step with prevailing trends, In The Court of the Crimson King was the group’s only gold album and a huge influence on the ensuing progressive rock. While guitarist Robert Fripp is the constant member of King Crimson, multi-instrumentalist Ian McDonald wrote a lot of the music for the album, while Greg Lake’s vocals are much stronger than the vocalists who’d replace him over the next few years – he departed to form Emerson, Lake, and Palmer.

The consensus opinion on In The Court of the Crimson King is that four of the five songs are terrific. ‘Moonchild’, the exception, starts off nicely enough but quickly descends into ten minutes of directionless noodling. But ’21st Century Schizoid Man’ starts off with a powerful assault, with a distorted Lake vocal and a tangible jazz influence through McDonald’s saxophone and Giles’ complex drumming, a song that has few points of comparison in the rock canon. ‘I Talk To The Wind’ is the gentle ballad, while ‘Epitaph’ and the title track are more conventional progressive rock epics. The performances match the material; Giles is an excellent drummer, Lake’s vocals and bass are superb, while McDonald’s multi-instrumental ability provides fluidity to the arrangements. Sinfield’s lyrics don’t necessarily bear up to close scrutiny, but they’re respectable enough and the fantasy themes set out the agenda for a lot of the progressive rock that would follow.

Sadly, this is the original lineup’s only complete album; Fripp was left with an almost completely different band for the followup albums, and it would take him a few years to find another King Crimson lineup that was as effective.

Track Listing:
21st Century Schizoid Man
I Talk To The Wind
Epitaph
Moonchild
The Court Of The Crimson King 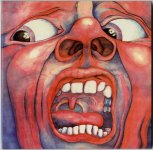