Staff member
Further lineup changes confuse matters. Gordon Haskell signs on as permanent vocalist, only to leave right after this album. In fact, he didn't even complete all his parts on this album, Yes vocalist Jon Anderson sings some of the parts on the closing song, and I like the fact that he does. His voice is unmistakable, and apparently he was asked to join on full time, but he politely declined favouring his role in Yes instead. Good job, too I say. I love Yes, no offence to Robert Fripp intended, of course. I like King Crimson too, more so now that i'm acquainted with this album, actually. Not that's it's an especially great album, it isn't. It's a very confused sounding album by a band splintered due to lineup changes and unsure of a direction to take. So, they experiment with Jazz/Rock fusion, experiment, full stop. They don't always sound together, performance wise this record pales in comparison with the best moments from either of the first two albums. But, the experimental nature, a very quirky experimental nature, does have a charm all of it's own. Charm probably isn't a correct word to use in relation to this record, but goddamit, I quite, fairly, a little.... really enjoy listening to this. The opening 'Cirkus' has mellotron, weird sounds, trumpet flowing over the top. Nonsensical lyrics sung with deep import and meaning anyway. The lyrics are like that all over the album. I'm glad that I can't actually make many of them out. The music often threatens to drown out the vocals altogether. Nearly the only time the vocals clearly rise above the music to provide something of their own is when Jon Anderson sings his parts in the closing song. Ah, yes, it's true. No pun intended. Or, possibly, even made.

'Indoor Games' is Jazzy, taking its cue from King Crimson of the first two albums, but the music is disconnected. Both this and the following 'Happy Family' sound like someone has taken a knife to the master tapes of the first two King Crimson albums, thrown all the pieces up in the air and randomly stuck them back together again, with little thought as to how the pieces connect to each other. But, it's an interesting approach, at least, it sounds interesting to me. 'Happy Family' reminds me of 'Cat Food' a little, but this is far more 'out there' than even 'Cat Food' was. The vocals here have been treated with a variety of effects, and poor old Gordon Haskell sounds better under a weight of studio effects than he does singing in his 'normal' voice. No, i'm not a fan of his. Sorry about that, all you Gordon Haskell fans out there! He does okay on the sweet and heavily featuring flute ballad 'Lady Of The Dancing Water'. Or maybe it was somebody else? I guess it was him. Lineup changes confuse me. I'm not a King Crimson 'student', by any means. I'll learn as I go along, I expect. What I learn from the closing song I'm not sure, but it sounds good. This twenty three minute long piece goes all over the place, as the album as a whole does. Spooky strange sci-fi noises, quiet moments, loud moments. And, Jon Anderson too. Piano, trumpet and everything ends rather anti-climatically, just stops. The song goes into a void, doesn't mean anything at all from the sound of it and neither does the album as a whole. But, 'Lizard' is interesting, very strange, not especially a record anybody is able to 'grab hold' of. But, it has a charm, you see! Relatively speaking, of course. 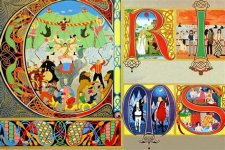