Neil Young - Everybody Knows This Is Nowhere - Album Review

Staff member
It can be seen that Buffalo Springfield, Neil's previous band, were more Beatles than Rolling Stones. They were all about trying to achieve a certain level of art and craft. Neil's self-titled debut album followed on from this, although Neil wasn't sure of himself - wasn't confident with his vocals and wasn't confident with the direction of the music. Enter a band called 'The Rockets'. Neil saw something in them. They could barely play, yet they had a feeling. He renamed them 'Crazy Horse' and thus begun a long collaboration between Neil and his new found bunch of fellows. They reminded him of The Rolling Stones, in terms of feeling. Real Rock N Roll music. 'Everybody Knows This Is Nowhere', Neil's second solo album, is so far away from his debut - that fans commonly regard this as his 'real' debut. Well, things get complicated in Neil Young land, but that's another story, and shall be told another time. For the time, way back in 1969 - Neil Young invents grunge music. Which wasn't even born for another 20 years, but there it is, in the guitar sound. Neil didn't invent anything with his guitar sound. It took in various influences, but he combined those influences in such a way that it became a distinctive sound. Factor in his voice and the uneasy harmonies and raw backing of Crazy Horse - and that's Neil Young. 'Cinnamon Girl' could have been released at any stage in Neil Youngs career, and fitted in. It became a minor radio hit, and Neil was on his way.

The title song is a sweet, imperfect thing, short and with nice harmonies and melodies from the folk crowd. 'Round And Round' sometimes takes some critisism from my fellow internet reviewers, but that's to miss the point of what it is, rather than what it isn't. It's a song originally written for Buffalo Springfield and rendered here with additional female vocals and very uneasy vocals, shifting, like a camp-fire. It's a very hippie song - but this droning thing, this thing that goes on and on and on, repeating the same damn things..... it's so good. It's called 'Round And Round' subtitled 'It Won't Be Long', but it IS long. And it does go round and round. That was the entire point. Neil was about capturing a feeling, he was never about achieving any level of perfection. Thus, 'Round And Round' is the kind of thing that is so real, you believe that you could sing and play it yourself with your friends. Following on from the mighty 'Cinnamon Girl' and the melodic title song, it gives this album one hell of a good beginning. Following the nine minute tour-de-force that it 'Down By The River', this album loses its way a little, but we'll allow Neil that.

'Down By The River' goes on and on, too. It captures a feeling, a great feeling and Neil and the Crazy Horse band felt like they could play forever - this is a heavily edited version of what they actually did originally play. Besides, any song with shambolic 'sha la la' vocals in it, is more than fine with me. 'Running Dry', subtitled 'a requiem for the rockets' is a noble song, the closing 'Cowgirl In The Sand' a ten minute thing that doesn't know when to end. Not knowing when to end isn't a problem though. The sound is good, the sound is great. Beautifully imperfect, and that voice of Neil's? He overdubbed vocals. He was unsure, yet growing in confidence. The one thing his voice did have, and still does, is that it doesn't sound like anybody else's, yet it retains a natural and very real emotional feeling. Imperfect, yeah? But sometimes, that's ok. Sometimes, that's more than welcome. 'Everybody Knows This Is Nowhere' is one hell of an album. 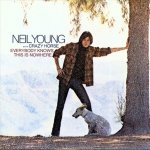