Staff member
Their first 3 albums could compete with anything anybody else was offering during that period and at times totally surpasses them. The band was led by guitarist virtuoso Ritchie Blackmore (of Deep Purple), who had a horrible habit of firing or pushing out the large majority of people who joined a band with him. It's a shame too, because for awhile they really had something amazing going.

Long Live Rock 'n' Roll is Rainbow's last album with Ronnie James Dio, which signified a complete change in the band into a more mainstream pop-metal outfit. This album, however, is one of hell of a last hurrah for the original group. They keep the sound and style developed on their previous record, Rising, and expand on it a bit. Rising had a strong beginning and end, but the middle section couldn't quite keep up. Plus the album itself was extremely short. LLR&R has a weak spot here and there as well, but overall it's a much more solid effort.

The album starts off with the title track, Long Live Rock 'n' Roll, a catchy sing-along rocker which Dio plays in concert even today. The song itself sounds similar to Starstruck from the previous album, with Blackmore using the same guitar technique in the verses. It's a fun song and a good way to start the album. (4.5/5)

Up next is Lady of the Lake, which is a bit of a slow down from the previous song. It chugs along with some great riffs from Blackmore and a haunting chant that appears underneath Dio's vocals throughout the song. The verses are dark and dreary, then when the chorus comes in its instantly uplifting. Great use of mood and ambience. (4/5)

L.A. Connection is more of a straightforward rock song, slow and riff-heavy. It sounds like something that would fit well with the music from the band's first album, Ritchie Blackmore's Rainbow. Compared to the other songs on this album, however, it feels a bit weak. (3/5)

If there's a centerpiece to this album, it's easily this next song. Gates of Babylon runs in the same vein as Stargazer from the previous album, except with a more pronounced Arabic flare. The song starts with a synth intro, instantly giving off a feeling of mystique and wonder. Once the rest of the instruments come in and Dio starts singing, you know this will be good. The song builds and builds with each verse and releases the power during the chorus. "Sleep the devil, the devil will take you away! Oh Gates of Babylon!" If you're looking for a song to define really epic rock, look no further. (5/5)

For most bands, it would have been impossible to top the previous song, but Rainbow manages to do it. Here, they introduce the studio version of their concert opener Kill the King, a powerful piece of proto-metal that flat out rocks. It starts out with some sweep arpeggios, which soon leads into a catchy Blackmore guitar riff. Dio's voice comes roaring in with some medieval-inspired lyrics all the while Cozy Powell is furiously pounding on the drums. By the time Blackmore starts his manic guitar solo the song is rolling along at break-neck speed. Finally, the song ends with several bangs and Dio gets a few last minute screams of "Oh! Kill! Oh! Kill! Ohhoh!" in. Awesome. (5/5)

The album starts to cool off at this point, which the song The Shed (Subtle). It has a nice echoed guitar intro, which turns into another great riff from Blackmore. While slower than the 2 previous songs, this song is still pretty catchy. The lyrics basically consist of Dio telling you how awesome he is and that you'd better stay the hell out of his way (hah). (3.5/5)

Sensitive to Light is the next song up to play. This sounds kind of like Do You Close Your Eyes from the previous album (both musically and lyrically). It seems like I've said that a lot throughout the review, but it is true. I like this song better than the formerly mentioned one however. Its relatively brisk-paced and fun to sing along with. (3.5/5)

A ballad called Rainbow Eyes ends the album. I'm not a big fan of ballads, but this one is extremely beautiful. String instruments and flutes back Ritchie's clean guitar arpeggios, while Dio softly sings of a lost love. Absolutely stunning way to end this album. (4.5/5) 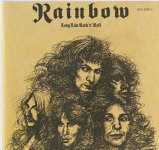 The moment when Blackmore smashes his guitar was when I told myself "I have to be a guitar player for life!"