Staff member
Trevor Rabin reveals once and for all that 'Owner Of A Lonely Heart' and the likes of the entertaining enough 'Leave It' were flukes and that actually, he couldn't write a decent song to save his entire life. '90125' had been a big hit album, sending Yes into the 80s well and truly, although not exactly intact. To all intents and purposes, '90125' was a Trevor Rabin solo album that Chris Squire and Alan White of Yes happened to play upon and that Jon Anderson just happened to be 'hired' for, as vocalist only, on just a few tracks. Tony Kaye, ex Yes keyboard man was hired to placate fans, Trevor Rabin and Trevor Horn played most of the backing tracks and keyboard parts themselves. If 90125 had been credited to Trevor Rabin, produced by Trevor Horn, it would have been far more an accurate a situation than to call it a Yes album. Still, alarmed as many Yes fans were, most were happy enough - because '90125' was decent 'enough' and did spark a commercial revival for Yes and did mean that Yes survived as an on-going entity. Steve Howe or Rick Wakeman may not have been present and the former spirit of Yes music, may have been entirely absent, but at least it was a version of Yes, even if not a definitive version! As for 'Big Generator' released some years later, Trevor Horn bailed out after most of the basic backing tracks were complete, due to arguments with Jon Anderson. Jon wanted more of a creative role for this album, wanted to get back that spirit present in classic Yes music. Trevor Rabin, the man who had written the hit 'Owner Of A Lonely Heart', wanted to swamp Yes music in semi heavy-metal guitar licks. As if that was the way to replace Steve Howe and Rick Wakeman. And, we musn't forget, Trevor was trying to do exactly that! He played all the guitar and keyboards, more or less, after all!

To be fair to Trevor, he only did all of the things he did, because nobody else in the band gave a flying f**k. Well, Jon did, but Jon couldn't wrestle control away from Trevor. Trevor had Chris Squire on his side, who after Trevor had helped sell loads of records with '90125', knew what side his bread was buttered on. Or so he thought at the time. He may have been right. 'Big Generator' sold a couple of million, the first album proper Yes made without Trevor, 'Open Your Eyes' released in 1996, sold only a couple hundred thousand. Oh, there were other reasons for that. Yes history is complicated enough to forget just looking at sales figures. I've just realised. I was about to end this review and I haven't spoken about any of the actual songs and performances. Well, good musicians don't become bad ones overnight, and Jon Anderson didn't become a bad vocalist. There are some nice songs here. 'Shoot High, Aim Love', 'Rhythm Of Love'. The closing, Jon Anderson written 'Holy Lamb' is a piece of dung, very airy and light and unsubstantial.... but, even this piece of fluff sounds more like Yes than the Trevor Rabin songs do. Even though it's a worse song than many of his!

I've nothing against Trevor Rabin. He was a supremely talented guitarist, keyboard player and arranger. He wrote 'Owner Of A Lonely Heart', had talent. But, he wasn't 'Yes'. He was in Yes longer than the likes of Bill Bruford, etc, etc. In the group for years and years - but it was a different Yes. Following this album, Jon Anderson would leave the group, teaming up with, of all people, Rick Wakemen, Steve Howe and that man Bill Bruford for a collaborative album. That album went down well with the critics. The 'official' Trevor Rabin and Chris Squire Yes sued. The ultimate result was that both versions got together for an album called 'Union'. 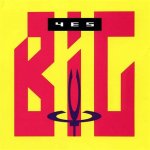