Staff member
The outcome of Carmen’s first three years of work was Fandangos In Space, an album proving not only that that this infusion was possible, but that it could also yield a result better than almost anything else in the genre.

Both lyrically and musically, Fandangos In Space is firmly rooted in Spanish culture. Gypsies seduce lovers, toreador’s blood drips from the horns of bulls, and sailors tell tales of adventures in the Mediterranean sea, all to the sound of castanets, catcalls of “Ol?”, and classical guitars. These atypical instruments entwine with more ordinary prog rock instruments, and it’s genuinely interesting to see the two styles battling each other for supremacy. Many times, funky, bass-driven segments can suddenly give way to a classical-guitar led verse, as seen in Stepping Stone, and, somehow, such transitions always feel perfectly natural.

Perhaps the album is even more captivating is when the two styles, rather than being separate entities, are joined together in a symbiosis. This can very well be seen in Sailor Song, where the Spanish melodies are accompanied by an energetic bass (provided curtesy of John Glascock, who would soon join Jethro Tull), eerie keyboards, and an electric guitar. The same can be seen in Looking Outside (My Window), a multi-segmented epic, much of which sounds like Yes’ Roundabout, but with the addition of castanets et al.

It’s impossible to write of Carmen without mentioning the vocals. On Fandangos In Space, four of the five performers contribute vocally, and so each singer can perform the song best suited to their style. Haunting female vocals float through first portion of Looking Outside (My Window) and are soon replaced by a lower, fiery male voice singing in Spanish. I’ll assert with absolute certainty that had their only been one vocalist, the album would not be nearly as enthralling: the wistful voice that makes Lonely House one of the greatest ballads to ever grace the ears of listeners would never be able to handle the more energetic, dramatic songs without a little help from his friends, who would likewise struggle to sing the airy falsettos in Tales Of Spain.

As it stands, Fandangos In Space still remains as one of the most unique progressive rock albums, over thirty years after it’s release. Arguably the greatest incorporation of flamenco into rock music, this is an album that should be heard by everyone. 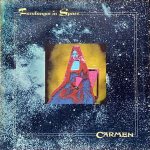