Staff member
As classic as Def Leppard’s fourth full-length release ‘Hysteria’ ended up being, the band knew that they could not take yet another four and a half years to make a follow-up. The rock musical landscape during the late 1980s was changing from that of hair-metal towards a more alternative rock feel, while grunge was just around the corner as the decades changed. In order for the quintet from Sheffield – England to take advantage of their newly found worldwide success, they would need to strike promptly.

Of course, there was a huge reason for the delay before ‘Hysteria’, with drummer Rick Allen losing his arm in a car crash. Unfortunately, Def Leppard would face similar trials and tribulations during the exhaustive touring of that LP, with guitarist Steve Clark’s alcoholism becoming a genuinely serious issue. It continued on through the initial recording phase of the band’s fifth release and it was eventually decided that Clark would be made to take 6 months leave and enter rehab. Tragically, Clark never returned to Def Leppard, dying from a mix of alcohol and prescription drugs in January of 1991.

Behind schedule, matters were not made any better when longtime producer “Mutt” Lange was then unavailable to work on the album (due to being booked to produce Bryan Adams’ ‘Waking Up The Neighbours’). Duties were eventually passed on to Lange’s engineer Mike Shipley and after a near five year wait, ‘Adrenalize’ was finally unleashed upon the waiting public!

Upon listening to the first three tracks, two major traits of ‘Adrenalize’ are revealed. Firstly, the slick production values of ‘Hysteria’ – which had drawn criticism from some quarters – was more pronounced, with the band sounding less metal than ever before. Meanwhile, the success of ‘Pour Some Sugar On Me’ had obviously encouraged the band to nourish their humorous side to good effect. The ode to Bart Simpson that is opener and lead single ‘Lets Get Rocked’ is the album’s involving and memorable highlight for predominantly that reason, serving up a smorgasbord of clever parent-defying lyrics. Meanwhile, 2nd single ‘Make Love Like A Man’ employs a perfectly composed sing-along chorus to highlight its tongue-in-cheek macho male posturing.

Splitting the above two tracks is 5th single ‘Heaven Is’, whose slicked-up glossy production is taken to new heights (or troughs depending on which way you look at it). The admittedly catchy chorus has its harmonies so polished up that it is almost comparable to something The Beach Boys would have put on vinyl 3 decades earlier! In truth, the attention to detail lifts this track above the norm, however that isn’t always the case as can be seen by the following two tracks; ‘Tonight’ and ‘White Lightning’.

‘Tonight’ is a real mish-mash that is an unsuccessful and superficial attempt at a slick ballad. Meanwhile, ‘White Lightning’ is the customary 7 minute epic of ‘Adrenalize’, following in the footsteps of ‘Die Hard The Hunter’ and ‘Gods Of War’ among others. Unfortunately, its lack of rough edges sees it fail to have the same atmospheric levels of the previous cuts, which is a shame since the subject matter is strong and a clear reference to the late Clark: “You wanna leave but you can't let go, you wanna stop but you can't say no, you never laugh about it, you just can't live without it. You've had enough but you just want more, you never get what you're looking for, you never laugh about it… You've got both ends burning, like a moth to a flame. You're going off the rails, like a runaway train. It's a no-win situation, and there's no way out. And no one will ever hear you… Scream and shout”.

For the most part, the final half of ‘Adrenalize’ is a contradictory mix of this and that, which tends to blend into each other. From the solid mid-tempo cut that is 4th single ‘Stand Up (Kick Love Into Motion)’, to the average filler of ‘Personal Property’ and ‘I Wanna Touch U’, through to the raw rockier ‘Tear It Down’, nothing stands out too significantly. The only cut which does distinguish itself is the ‘Love Bites’ and ‘Hysteria’ clone of a 3rd single; ‘Have You Ever Needed Someone So Bad’. This power ballad hits all the right notes with Joe Elliott’s controlled vocals during the verses exquisitely building up to the perfectionist harmonization of the sing-along backing vocals during the pre-chorus, chorus and breakdown.

Drawing an overall conclusion on ‘Adrenalize’ is difficult, as in a sense, it is a contradictory piece. Its over-production and use of gimmicks work well on occasions, but seem out of place at other times, meaning the album is not a successfully cohesive unit. Still selling by the bucket-loads (approximately 7 million worldwide) and yielding enough hit singles to please any band, there is enough here to satisfy both casual and loyal fans. Yet, one cannot help but be a little disappointed that ‘Adrenalize’ is nowhere near the standard set by the band’s 2 previous masterpieces.

6. Stand Up (Kick Love Into Motion)

8. Have You Ever Needed Someone So Bad

9. I Wanna Touch You 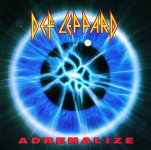