Staff member
Confidence can be an enormously positive factor for a band, especially for one that is still up & coming and so young. At an average age of just 20 and approaching their second full-length release, it is apparent that the uncertain ambition of Def Leppard’s debut ‘On Through The Night’ has given way to a much more assured outfit on ‘High n Dry’. One need only look at the running times and eventual quality of the first 2 tracks to realize this.

Greeting its audience with a distinctive guitar riff, lead single and album opener ‘Let It Go’ makes excellent use of its 4:43 duration. Its main hook is the simple, but oh so successful, backing vocal dominated chorus of “Let it Rock… Let it Roll… Let it Go”, which reminds of AC/DC both in content and sound. However, the extra duration allows Def Leppard to build on their compositions, with this cut including a strangely effective breakdown that contains over-programmed vocals that lead into a rousing solo. The 5 minute ‘Another Hit and Run’ which follows is not too dissimilar and is solid without fully capitalizing on its potential.

For the most part, the first side of this album is above-average and contains good variety. The title track (sub-titled ‘Saturday Night’) is a shorter and dirtier old-fashioned rock ‘n’ roll drinking song which is sure to appeal to original fans of the band. Meanwhile, ‘Switch 625’ is a mini-revelation being a 3 minute instrumental that is subtly effective in both its placement and quality. Without being anything too technically outstanding, its driving momentum and gradual build-up gives the impression of being a passenger in a Formula 1 racing car for a lap.

While the second side of ‘High n Dry’ is less inspiring than the first and is unfortunately not as well served by lengthier tracks, everything is decent enough. ‘You Got Me Runnin’, ‘Lady Strange’, ‘On Through The Night’ and closer ‘No No No’ are all lifted to differing degrees by another of this album’s strengths; the addition of producer Robert John “Mutt” Lange. Having previously worked on AC/DCs ‘Highway To Hell’ and ‘Back In Black’, Lange has polished up the guitars, drums and vocals nice and shiny. While that kind of production does remove some of the grittier edges that made earlier cuts work, this quartet ultimately isn’t as strong and practically begs for these slicker touches.

That leaves two tracks still to be mentioned… While ‘Let It Go’ may have seemed like the obvious lead single circa 1981, it is these other two tracks which not only make this album such a success, but also shapes Def Leppard’s future. Occupying the slower end of the spectrum, track 4 ‘Bringin On The Heartbreak’ played an under-rated role in the growth of popularity that was the (eventually over-used) hard-rock/hair-metal ballad. Beginning with atmospheric guitar and vocals in the verses and then building up brilliantly to the superbly mixed and produced sing-along chorus, ‘… Heartbreak’ is simply a timeless tune that has aged very well.

However, possibly more telling for the band’s future is penultimate track ‘Mirror, Mirror (Look Into My Eyes)’. With six words sung by the band’s guitarists - “Take A Look Into My Eyes” – Def Leppard’s future sound would become apparent. This perfectly produced backing vocal hook combines successfully with Joe Elliott’s raspier dueling vocals to possibly provide the most overlooked chorus of the band’s career.

Ultimately, while ‘High n Dry’ cannot claim to be a resounding success as an individual album, it is indeed one from a progression standpoint. Def Leppard is clearly a more confident outfit here and with help from new producer “Mutt” Lange, they allow their compositions to include greater scope in order for the band to find their sound. While this does result in some misses, they are never too far off target and are more than made up for by the album’s highlights which have aged extremely well.

2. Another Hit and Run

4. Bringin' On the Heartbreak

8. On Through the Night

9. Mirror, Mirror (Look Into My Eyes) 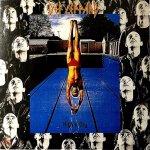