Staff member
The clue is in the title. Mirror Ball: Live and More has a real focus on the “More”. For GBP£15.99, what did I get for my money? The double album includes 21 live tracks with 3 new studio recordings, and there is a 50 minute DVD. The DVD includes a tour documentary, featuring four live videos, with music videos for the band’s two most recent singles “Nine Lives” and “C’Mon C’Mon” as bonus content. Even the liner notes contain a decently sized collection of photos of the band.

So you get a lot for your cash, but is it any good? Thankfully, yes. It’s nice to get an impressive live release from one of the major 80s pop rock/metal acts. Unlike 70s bands such as Sabbath and Thin Lizzy, rock bands of the 1980s often seem to struggle on the live album front. Roth-era Van Halen didn’t try, Hagar-era Van Halen, Mötley Crüe’s and GN’R’s ones were mediocre, Metallica require you investing in the entire “Big Four” box set and Bon Jovi’s one only contains a rather small 11 live Bon Jovi songs...only Iron Maiden have done the job right, churning out quality live albums like it’s going out of fashion. Live albums do seem to be something the British seem to do better than their American rivals, don’t they?

Mirror Ball captures the still-powerful band on their triumphant 2008-2009 "Sparkle Lounge Tour", with a line-up that has been in place since 1992. The brotherly camaraderie is audible, and that is essential for a band that uses vocal harmonies as a selling point. Being the band’s first live album, the set-list plays it safe and features no rarities and uses traditional arrangements. With a very crisp recording, Mirror Ball could easily serve as an introduction to the band for beginners – it’s essentially an updated greatest hits set. 2006’s Yeah! covers album and 2008’s Songs from the Sparkle Lounge have both come around since Leppard’s last compilation, and both are represented here – David Essex’s “Rock On” and three Sparkle Lounge tracks make it onto Mirror Ball.

The track listing has been selected carefully, and is structured perfectly. Disc one spreads two Sparkle Lounge tracks amongst seven classics, and closes with the “Rock On” cover. The bass solo which introduces the un-Lepaprd sounding “Rock On” ushers in the more eclectic mid-point of the album, acting as a breather between the bombastic first and second acts of Mirror Ball. The acoustic “Two Steps Behind” leads into an acoustic rendition of the normally-electric “Bringin’ on the Heartbreak”. The instrumental “Switch 625” concludes this diversion, and is followed by six of hard rock’s finest anthems. Finally, avoiding putting up the new material against the peak of the band’s songwriting, we get the band’s version of The Sweet’s “Action” and a final Sparkle Lounge track – “Bad Actress”. It acts as an appropriate bridge to brand new single “Undefeated” – a solid addition to the Def Leppard catalogue, with a muscular riff rarely heard on the band’s radio-orientated single releases. “It’s All About Believin’” is good too, if generic – it’s Def Leppard by numbers, but that still makes for a half decent anthem.

The DVD is good too, the live videos – including three from the band’s triumphant set at Download Festival 2009, with a crowd of over 60, 000 – are excellent, whilst the pair of music videos are fun, if slightly uninspired.

The album is not without flaws. The live performances are impressive, but one still suspects if they had done this any earlier in their careers, the vocals might have been that little bit more powerful. The title and cover art – a glowing disco ball – only really link to the Sparkle Lounge themed tour as intended if you squint at them very hard. Disco balls are not very rock ‘n’ roll, are they? Studio track “Kings of the World” – the latest in a series of Rick Savage “tributes” to Queen – is so ridiculous it borders on seeming like parody. The documentary is a little bit dull, and it’s irritating to have to skip between chapters to view the live performances on there. Die-hard fans may lament the lack of any material from the band lean decade, which started in 1995, and would lyrics for the new songs be so hard to provide?

Ultimately, these are minor quibbles though – the lengthy, well picked track-listing, solid performances and generous selection of bonus material makes for an incredible package for newcomers and old fans alike.

2. "Bringin' On the Heartbreak" 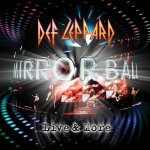