Def Leppard - On Through the Night - Album Review

Staff member
Towards the tail end of the 1970s, a movement known as the ‘New Wave of British Heavy Metal’ began to emerge from the ashes of more traditional metal bands such as Black Sabbath and Led Zeppelin. Displaying a faster and grittier sound, the genre was also characterized by its middle-class common-man image. It was this latter trait which partially played a part in making Def Leppard one of the leaders of the movement (alongside Iron Maiden and Judas Priest), especially since they had shown such a Do-It-Yourself ethic in releasing their 3 track debut EP in January of 1979.

The relative success of that self-titled E.P led to Def Leppard swiftly signing with major labels that would release their first full-length on both sides of the Atlantic. Come March of 1980, that all became reality when ‘On Through The Night’ was released to the masses, promptly breaking into the U.K top 20 on the back of three sub 4 minute rapid-fire rockers which were released as singles.

To a certain extent, the opening ‘Rock Brigade’ lays the foundations for the album very well, since it fits an incredible amount into its 3:09 duration. Dominated by a distinctive and very effective guitar riff, a short solo is also included. Furthermore, Def Leppard showed an enormous skill for harmonies here with a simple, yet oh so successful, backing vocal in its chorus. Later, ‘Wasted’ is a similar rapid-fire rocker which contains a grittier persona. Conversely, track 2 ‘Hello America’ greets with highly glossed over (almost Beach Boy-like) vocals which are clearly aimed at a more worldwide mainstream audience and suggest where this Sheffield quintet’s ambition would eventually lead them.

It is that ambition however, which even at their young ages, would never allow Def Leppard to be tunnel-visioned. There is more than a sufficient amount of variety sprinkled throughout ‘On Through The Night’, even if not all of it is necessarily successful. One of the better examples is the interestingly structured ‘Sorrow Is A Woman’, a predominantly slower cut that also includes a terrifically rousing solo that is nicely built up on the back of Rick Savage’s excellent bass lines. Also effective is the driving Glam-Metal stomp (complete with echo’ey vocal hook) of ‘It Could Be You’.

One example where the band’s ambition proves their undoing is the mish-mash that is the overlong ‘Satellite’. To some degree, the production of this album does not quite match the band’s ambitious ideas. Since it tries to blend differing musical styles, ‘Satellite’ could have been decent with improved production work, while the strange sci-fi like ‘When the Walls Came Tumbling Down’ is a better idea on paper than in practice circa 1980.

Of course, the production skills apparent here are a darn sight better than on the previous year’s E.P, which makes the inclusion of two re-recorded tracks more than worthwhile. The fantastic guitar lines thrown about on ‘Rocks Off’ (originally titled ‘Getcha Rocks Off’) make it one of this album’s highlights, especially since the superior production makes the rhythm section of Savage and new teenage drummer Rick Allen shine during an instrumental portion that reaches a climax with an excellent solo. The near 8 minute ‘Overture’ then replays the closer role to similar positive effect as it did so well on the E.P.

No matter what one may conclude about ‘On Through The Night’, it is definitely an album which foreshadowed the potential of Def Leppard. Showing maturity and a musical nous that was well beyond their teenage years, the band crafted a heavy, yet hooky, sound which paved the way for many a successful band throughout the 1980s. ‘On Through The Night’ can be categorized as a grower of an album since the more superficial elements that would appeal to the mainstream will initially distract some listeners from what is actually an incredibly tight musical and vocal performance. Any deficiencies (production, some filler, etc…) are to be expected on such a young band’s debut.

Tracklist for On Through the Night:

3. Sorrow Is a Woman

6. When the Walls Came Tumbling Down

10. Answer to the Master 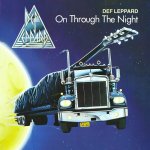