Staff member
While being interviewed for the ‘Live From Abbey Road’ television show in 2007, Def Leppard’s lead vocalist Joe Elliott stated something rather telling. Paraphrased, he suggested that if his band had begun their existence in the current musical climate, they may never have released a third album! While both ‘On Through The Night’ and ‘High n Dry’ were solid LPs which hinted of more quality to come, they didn’t exactly set the record books alight in terms of sales and pleasing their label. After listening to ‘Pyromania’, thank goodness that Def Leppard was a product of the late 70’s and not the current decade we live in.

Things used to be different… Bands had a lot more time to settle into the industry and with those extra years would come the opportunity to not only find their true sound naturally, but also get their musical collaborators right. Def Leppard had already previously replaced their drummer and leading up to ‘Pyromania’, Pete Willis was also given his marching orders and replaced by Phil Collen. However, it was their teaming with former AC/DC producer “Mutt” Lange on ‘High n Dry’ which would eventually be seen as the band’s most important move.

Together again with Lange on ‘Pyromania’, Def Leppard practically perfects the sound of accessible metal. Label it whatever you want to; stadium rock, hair metal, hard rock or anything else you can come up with, this Sheffield quintet (and their pioneering producer) have basically taken heavy metal not too dissimilar to the likes of Iron Maiden & Judas Priest, and shined it up so successfully that the mainstream populous just could not resist it. Yet, they have been able to do so in a manner which still remains rather heavy and therefore continued to please the loyal fanbase they had previously built up.

Similarly to ‘High n Dry’ opener ‘Let It Go’, ‘Rock Rock (Till You Drop)’ contains the “simple but effective” vibe which Lange has obviously brought over from AC/DC. Lead vocalist Joe Elliott raspily yells a’la Brian Johnson, while the backing vocals during the chorus are an interesting mix of menacing and melodic. Later, the same treatment is just as superbly given to the old-fashioned metal cut that is ‘Stagefright’. While being nowhere near the best that ‘Pyromania’ has to offer, the accessibility of both of these tracks sum up the album in a sense.

So what is the album highlight of Pyromania? Well, choosing between ‘Photograph’ and ‘Rock Of Ages’ is like asking a parent which is their favorite child. Acting as the LPs lead single, ‘Photograph’ is actually a little difficult to pin down, but its brilliantly involving build-up includes a super effective pre-chorus and especially immediate chorus. The lyrics (written about Marilyn Monroe) are also relatable in covering the idolizing of a star of the screen. Conversely, second single ‘Rock Of Ages’ includes what may just be one of the most memorable and anthemic opening verses of all time! Also containing a terrific solo, the tremendous glam stomp of this cut was a forerunner to the band’s trademark song; ‘Pour Some Sugar On Me’.

Where ‘Pyromania’ betters its predecessor is in its depth. There is barely a filler track amongst the ten cuts and the third and fourth singles are both very strong. ’Too Late For Love’ is the token album ballad and impresses through its atmospheric guitars, even if it is not quite up to the standard of prior release ‘Bringin On The Heartbreak’. Later, ‘Foolin’ begins acoustically and at an almost identical tempo, before building up into a song which more closely resembles the structure and pace of ‘Photograph’. Even the so-called weaker tracks on ‘Pyromania’ are good, with ‘Comin Under Fire’ being under-rated due to its infectious chorus, and ‘Action! Not Words’ harshly dealt with due to it’s positioning as the penultimate track of the LP.

The most divisive duo on ‘Pyromania’ however, is more likely to be the five minute plus tracks which end either side… Both of which hark back to the band’s more ambitious Led Zeppelin influenced days. The moody ‘Die Hard The Hunter’, while not as involving as it should be, arguably contains the album’s best lyrics as the problems facing returning soldiers re-acclimatizing into society is dealt with. Meanwhile, closer ‘Billys Got A Gun’ adds some synths in order to add extra atmosphere to proceedings. The slick production even allows this cut to include an entire verse led by the backing vocals of the band (credited to The Leppardettes, but rumoured to simply be the musicians themselves).

Due to the subsequent commercial success of ‘Hysteria’, it is often forgotten how influential a 45 minute set ‘Pyromania’ was… And to a certain extent, still is! If anything, this 1983 release has aged even better than ‘Hysteria’ and still remains relevant a quarter of a century later. Equally filled with tight musicianship, infectious melodies and anthemic choruses, Def Leppard and producer “Mutt” Lange reset the boundaries of how accessible metal can be. The use of layers of harmonized backing vocals is especially impressive on this album which is thoroughly recommended to pretty much anyone… No matter what their taste in music is.

4. Too Late for Love 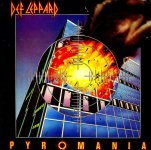