Staff member
The lamely-titled and atrociously cover-designed Songs from the Sparkle Lounge is Def Leppard’s return to original material after the surprising success of their covers album Yeah. Def Leppard is not only a talented band, but they are critical and commercial legends, having consistently won over rock critics while garnering millions of fans who expect little more from their music than a great time. They also have one of rock’s greatest stories (nicely chronicled in a TV film). Not only did their drummer survive a car accident in which he lost his arm, after which they stuck together and worked four years to create perhaps the finest pop-metal album of all time in 1987 with Hysteria, but then their guitarist died in 1991 right before they were to follow up Hysteria. The eventual album Adrenalize was admirable given what they suffered, but it was a sure sign their first and best period was over. Their music would really never be the same after that, but then again they’ve always been changing, mapping out a route between heavy metal and hard pop.

Still, as they had proved in the 80s, they’re survivors, and continued to have brief moments of glory in the 90s. Now, more than twenty years after their peak Hysteria, the band is teetering on the brink of rock-Gods heaven: their music so completely out of date it’s possible it may have come back around to cool again (as things are known to). But they’re here still at it and rightly so; they’ve managed to remain relevant in ways their contemporaries haven’t, and they’ve well beyond proven their power and strength. It’s not about sales or acclaim anymore, but just a bunch of good friends doing what they do best, and that’s always admirable.

Unfortunately, that may be the best part about Songs from the Sparkle Lounge. It’s like they sound great, but they don’t; the blazing and blaring guitars sound freshly rough and rugged without relying on as much polish as they have before, but they’ve failed to come up with any really compelling hooks to wrap the guitars around. And anyone who knows Def Leppard’s music knows that their power always rested on a knack for gorgeously heavy but accessible hooks; in essence, perfect hard rock. It’s more than a little troubling to explain their inability over the last ten years or so to craft solid new hard rock anthems; instead taking refuge with occasional stabs at ok-ballads and recycled numbers (“Promises”, which was excellent but too similar to “Photograph”). Why can’t the lighting of Hysteria strike twice? If it hasn’t already, at this point, it probably never will, and Sparkle Lounge only reaffirms this.

What saves this album from being a complete bomb is the fact that nothing on it is a bomb. In fact, none of the songs are bad. They definitely aren’t, however, distinguishable, well-crafted, and memorable. There is no magical art to them, no gallant hooks that will stay with you for eternity, no rock for the ages here. This could only be half-applied to “Nine Lives”, however, the obvious lead and really only single from Sparkle Lounge. Nine Lives scratches at the surface of what Def Leppard used to do so well: marry their crunchy guitars with a good chorus and some typical hard rock topics of living and dying, or coming close to dying, something the band does admittedly know a lot about. The (thankfully brief) inclusion of country star Tim McGraw is a slight nod to both general rock machismo that spans metal to country and the band’s occasional flirt with country (their deity-like former producer, Mutt Lange, crafted wife Shania Twain’s huge hit records of the 90s) last hinted on “Love and Affection”, the quaint closer to Hysteria. Elsewhere, when the band has found a decent chorus line, they haven’t the originality to at least give it a new title, instead ripping off Billy Joel’s “Only The Good Die Young” with, you guessed it, “Only The Good Die Young”, which, as with any rip-offs, seemingly takes Joel’s hooks, throws it in a blender, and carefully rearranges it to somehow sound passable. “Tomorrow” starts nicely with some suicide guitars, but when you realize the chorus is simply a “woo-hoo” by Joe Elliot, it’s clear there just wasn’t much thought put into this record. Speaking of Joe, his once-high soaring vocals are reduced to a lower, mundane muffle masked by some light effects. Much like the rest of the album, it’s not in bad condition, but it used to be so much better.

One of their classic Hysteria songs “Animal” took several frustrating years to make. Perhaps that’s a practice Def Leppard should return to. Their best records came when a lot of time passed – four years between Pyromania and Hysteria, five years between Hysteria and Adrenalize, and three between Slang and the late return to form of Euphoria. Granted, two of those periods were marked by tragedy. That doesn’t mean anyone wishes any ill will upon the band, God forbid. Instead, they ought to take some time off and mull around as if they did loose something– or whatever other inspirations good and bad they can use to energize their music. Otherwise, they ought to retire. Songs From The Sparkle Lounge is like a senile elder: you let them wander around raving, no matter what kind of junk they blab, because they’ve been to hell and back. You just don’t want to hear them much anymore. Instead of blabbing, they could tell some of their tales, so we all might learn something, and it might also sound interesting for a change, too.

Tracklist for Songs from the Sparkle Lounge:

10. Only the Good Die Young 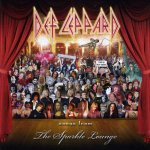