Staff member
Genesis' absolute pop peak. Whereas Abacab was largely an experimental laboratory, Genesis finds the group taking all of the lessons and discoveries of before and synthesizing them into a shiny, beautiful pop masterpiece. If you've come to believe that nothing good could come from the mouth or mind of Phil, THIS is the place to go to wean yourself off of that idea. Whereas on previous albums, Phil's vocals were quite often a liability, his singing throughout is quite possibly the most impressive technical feature of the album. Also, the band's use of drum machines has finally reached a point where its incessant use can be fully justified - not once on the whole album do they become annoying, and in several places, they are positively genial. And finally, these melodies mostly RULE - only one or two of the songs sag at all, and the rest will get stuck in your head for hours on end (and even better, you'll WANT these songs stuck in your head!).

First of all - Collins-era Genesis doesn't get any better than Mama. I know I said in the previous review that Abacab was probably the finest synth pop number ever written, but Mama I can't even necessarily classify as pop - it's far too angry and heated throughout for me to feel comfortable calling it synth-pop (though maybe I should, in which case, Mama wins the synth-pop dominance competition). But whatever may be, one listen to Mama could single-handedly remove all predjudices with regard to pop Genesis. For one thing, the drum machine programming is absolutely incredible - it's a menacing little shuffle, a combination of what almost sound like maracas and some rhythmic pounding, not to mention some omnious sounds from Tony's keys in the background to build up the tension. And then there's Phil, who demonstrates quite aptly that almost NOBODY can beat him when it comes to singing pissed-off songs of love and lust (too bad he so rarely writes songs like that ...). From his scary "ha-ha's" to the way he's able to scream out his desperation for the woman in question, this is by far the best vocal performance that Collins would ever give as lead vocalist for the band, and in and of itself would make the song a classic. But the way it all combines ... damn. Damn.

Of course, the rest of the album can't really hope to live up to such an amazing beginning, but it nearly does nevertheless. Only one of the songs I would count as definite filler, the closing It's Gonna Get Better. The verses have some interesting stuff going on in them, with a bizarre keyboard-strings pattern underpinning parts of it, but there's a large stretch in the middle that's way too obviously influenced by Collins and that has the audacity to feature him going into falsetto. To a lesser extent, though, I could say the same thing about Taking it All Too Hard - it's not bad, and is fairly well developed, but ... well, the best way I can put it is that, by this point, when Collins is singing a song that doesn't have a good amount of drive or energy or bounce, it's hard to avoid the stench of banality. It could be a lot worse than it is in this case, but again, it could be better.

Fortunately, I have virtually no complaints about the rest of the album. EVERY one of the other songs is a stone-cold Genesis classic, pop or no pop. That's All was the biggest hit of the album, and deservedly so, as the melody is probably the catchiest in the batch from start to finish (though I must note that the "head down to my toes" hook reminds me a bit too much of a hook from a track off of Procol Harum's A Salty Dog, I forget which song at the moment). But egads, Silver Rainbow sure isn't any worse, and might be better. The cute little piano riff that drives forward the song rules, the vocal melody is ingenious, and the chorus soars!! It is easily my second favorite on the album, and I consider it a shame they didn't end the album on this note.

There's also a pair of more up-tempo numbers, and they're just as fun. Illegal Alien may have a somewhat dippy topic (and the accompanying picture of the band in the sleeve is atrocious), but Phil's vocal delivery is hilarious throughout, and you just have to admit that chorus is fun to sing along to. And, of course, there's Just a Job To Do, which I absolutely adore and so should you. I don't like synth horns anymore than the next man, but they're completely appropriate in the way Tony uses them, and the melody is, per usual, positively incredible. The lyrics also rule mightily here, looking into the mind of a hired hitman who knows that his future victims are scared out of their wits since they know he's around.

Now, what puts off many fans with regard to this album is the centerpiece of the album, and arguably the only trace of "progressive" to be found throughout, the Home by the Sea/Second Home by the Sea suite. Now, what obviously bothers most people of the suite is the Second chunk, where Tony and Mike decide to putter around a bit over a drum loop. The thing is, I know that from a technical standpoint, there's almost nothing to it, but I have absolutely no problems with this instrumental passage - it's very engaging in its simplicity, moving through some perfectly enjoyable and memorable passages with no problem. Ironic, isn't it? As soon as Genesis stopped trying to make their jamming pointlessly complex (since they were theoretically required to do so by the 'tenents' of progressive), I suddenly learned to enjoy their lengthy instrumental parts! But whatever - the main melody is fairly complex, sure, but it rules. So there.

This is a great album. If you're only a fan of the prog Genesis, you'll probably hate it, but I hope so very much that you can overcome any "anti-pop" bias and enjoy this collection of great pop. Enjoy it - it's also the last good album Genesis would ever make.

Track Listing:
Mama
That's All
Home By The Sea
Second Home By The Sea
Illegal Alien
Taking It All Too Hard
Just A Job To Do
Silver Rainbow
It's Gonna Get Better 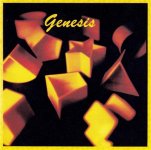