Staff member
The epitome of the term “sex, drugs and rock & roll” (with an added injection of sleaze and drunken debauchery), L.A. lads GUNS N’ ROSES were the bees knees of heavy metal on the strength of one glorious 1987 album, `Appetite For Destruction’. Distinctive by Axl Rose’s screeching vocal anthems and Slash’s down-n-dirty guitar licks, the latter best described the band as like a grenade with everybody struggling to keep in the pin. Frontman Axl’s rebellious lyrics were down to his dysfunctional childhood upbringing, in which his biological father abandoned the family (Axl was only two at the time), while he was constantly beaten by his mother’s second hubby whom he thought was his “real” dad; his adopted name William Bruce Bailey was substituted with his original birth name William Bruce Rose (c. 1979) after he found insurance documents in the family home. Moving from Lafayette, Indiana to escape the authorities and his criminal lifestyle (c. late 1982), he subsequently adopted the name W. Axl Rose when GUNS N’ ROSES began to break through in the mid 80s.

The roots of GUNS N’ ROSES lay with the amalgamation of L.A. GUNS guitarist Tracii Guns and Axl and childhood Lafayette buddy Izzy Stradlin (on rhythm guitar), who’d formed Hollywood Rose. When moonlighting Tracii returned to his old band, the remaining pair enlisted lead guitarist Slash, bassist Daff McKagan and drummer Steven Adler. With the seminal G N’ R line-up now complete, the ramshackle collection of fun loving musical vagabonds subsequently embarking on the “Hell” tour. Although these outings turned out to be a disaster, GUNS N’ ROSES created a major buzz with their residency at L.A.’s Troubadour club. In the fall of ’86, they unleashed their debut recording, a 7-inch EP entitled `Live ?!*’ Like A Suicide’ featuring a rendition of AEROSMITH’s `Mama Kin’. A short, sharp shock of visceral rock’n’raunch, the record struck a major chord with critics and fans alike, quickly selling out of its limited 10,000 pressing. Snapped up by Geffen Records, the band delivered their historic and ground-breaking debut album, APPETITE FOR DESTRUCTION (1987) {*10}.

A head-on collision of AC/DC, AEROSMITH and heroes The ROLLING STONES (Axl is a vocal ringer for NAZARETH’s Dan McCafferty), what the record lacked in originality, it made up for with sheer impact. The opening unholy trinity, `Welcome To The Jungle’, `It’s So Easy’ and `Nightrain’, alone laid the rest of the L.A. hairspray pack to waste, while with chart-topper `Sweet Child O’ Mine’ and `Paradise City’, the band staked their claim to chart domination and stadium stardom. In spite of its controversial cover art featuring a robot raping a woman (later withdrawn), the record went on to sell a staggering 20 million+ copies worldwide and remains one of metal’s defining moments. It also remains one of the most vivid portrayals of the claustrophobic seediness of the L.A. metal scene in much the same way as N.W.A. captured the “fuck-you” nihilism of the city’s black ghetto with “Straight Outta Compton”.

Live, GUNS N’ ROSES were caustic and volatile, as likely to produce tabloid headlines as blistering performances. Image-wise, they had Slash as an unmistakable focal point; his trademark top-hat perched on a nest of thick curls that all but obscured his face, fag constantly hanging from his lips a la KEITH RICHARDS. Controversy turned into tragedy the following summer, however, when two fans were crushed to death during a G N’ R set at the 1988 Castle Donington Monsters Of Rock festival.

Later that year, the band released G N’ R LIES (1988) {*6}, a half live/half studio affair that combined their earlier EP with four new acoustic numbers. On the lovely `Patience’, Rose was transformed from sneering vocal acrobat to mellow songsmith, although by `One In A Million’ he was back to his old visceral ways with a vengeance. While the song was performed with undeniable passion, it was all the more worrying given the subjects he was railing against; the track was basically an unforgivable tirade of abuse aimed at “police and niggers” and “immigrants and faggots”, hmmm… ironic? Still, the good citizens of America snapped up the record and it peaked at No.2. (No.22 in the UK).

Come 1990, the band were supporting The ROLLING STONES on a world tour, their star status rapidly assuming the same magnitude as their drug habits. Adler’s heroin problems eventually saw him kicked out later that summer; CULT drummer Matt Sorum taking his place on the drum stool. The band also recruited a keyboard player, Dizzy Reed, a sure sign they were beginning to lose the plot. In April that year, Axl was married to Erin (daughter of Don of The EVERLY BROTHERS), but a couple of months later, they counter-filed for divorce.

A terminally dull but hit cover of DYLAN’s `Knockin’ On Heaven’s Door’ (included at first on the Days Of Thunder OST) seemed to confirm this, although `Civil War’ (their contribution to Romanian orphan project, Nobody’s Child) was more encouraging. When it eventually surfaced in 1991, the band’s next studio project was a resounding disappointment. The very fact they released the disc in two double-play volumes showed a severe lack of objectivity and needless to say, the quality control was non-existent. A sprawling, unfocused jumble, the collection nevertheless included a few inspired moments and both albums reached No.1 and 2 respectively on both sides of the Big Pond. The harder-edged USE YOUR ILLUSION I {*7} was identified by the inclusion of at least one track, the band’s 9-minute piece de resistance `November Rain’ (Slash’s guitar solo climax has never been bettered), while the preceding hits `Live And Let Die’ (a cover of PAUL McCARTNEY & WINGS’ movie smash) and `Don’t Cry’ put them on top of the power-ballad heap; the latter with alternative lyrics was the penultimate track on USE YOUR ILLUSION II {*6}. Intro’d by memorable Strother Martin lines (“what we have here is a failure to communicate…”) from the cult 1967 movie Cool Hand Luke, the aforementioned anti-war `Civil War’ and that DYLAN celluloid piece (first heard on “Pat Garrett & Billy The Kid” in ’73), the rest of the band were afforded their own individual contributions; Duff’s tribute to the recently departed JOHNNY THUNDERS by way of `So Fine’, Axl and his team’s `Yesterdays’ (re-twinned with `November Rain’ in ‘92) was not so brilliant. The release of the latter Top 10 single was a long way off (15 months) from the album’s kick-start preview Top 3 gem, `You Could Be Mine’.

During the subsequent world tour, Axl’s buddy Stradlin walked out, finally leaving the band soon after for a solo career (his replacement was Gilby Clarke). Among the dates on the record-breaking 28 month world tour was a performance at AIDS benefit concert, the Freddie Mercury Tribute, rather ironic in light of Rose’s lyrical homophobic tendencies. The bandana’d one courted further outrage when the group included a Charles Manson song (`What’s Your Game!’) on their 1993 covers album THE SPAGHETTI INCIDENT? {*4}, a record that also saw the band re-work their faves into UK Top 10 hits from DEAD BOYS’ `Ain’t It Fun’ to The Skyliners’ nostalgic `Since I Don’t Have You’; the others on show were `New Rose’ (The DAMNED), `Down On The Farm’ (UK SUBS), `Human Being’ (NEW YORK DOLLS), `Raw Power’ (IGGY & THE STOOGES), `Buick Makane (Big Dumb Sex)’ (T. REX), `Hair Of The Dog’ (NAZARETH), `Attitude’ (The MISFITS), `Black Leather’ (STEVE JONES), `You Can’t Put Your Arms Around A Memory’ (JOHNNY THUNDERS) and `I Don’t Care About You’ (The FEAR); a mention too for some B-sides:- `Nice Boys Don’t Play Rock’n’Roll (ROSE TATTOO) and `Whole Lotta Rosie’ (AC/DC).

On the same level, the Guns also massacred The ROLLING STONES’ `Sympathy For The Devil’ for the Interview With A Vampire soundtrack, their last outing for some time. Clarke duly left the band following a solo release (`Pawnshop Guitars’), while Slash also moonlighted with the album `It’s Five O’Clock Somewhere’ (1995) under the moniker SLASH’S SNAKEPIT. The cat in the top hat finally quit GN’R the following year, although it hardly mattered as the band were seemingly in terminal creative limbo; he eventually resurfaced in 2001 with a solo album, `Ain’t Life Grand’, although rumours continued to circulate about a SLASH-less fresh GN’R album with a working title of “Chinese Democracy”.

By 2004, the release sheet was still blank (but for `Oh My God’ from the 1999 movie End Of Days) and fans had to make do with another “Greatest Hits” collection, albeit without the consent of Rose (and ex-GN’R members) who unsuccessfully attempted to block its release with a court injunction. In the midst of this will-they-won’t-they soap opera, Slash, McKagan and Sorum re-grouped under the VELVET REVOLVER banner, and while they found a second guitarist in the shape of Dave Kushner, it would take several high-profile auditions before they settled on erratic frontman, Scott Weiland (formerly of STONE TEMPLE PILOTS). Surprise surprise, more grief followed as the band attempted to record a debut album around Weiland’s court appearances and drug rehabilitation. `Contraband’ finally appeared in June 2004, sating the patience-strained appetite of long-time GN’R fans for some swaggering R’n’R destruction, scaling the charts and generating a couple of minor hits, `Slither’ and `Fall To Pieces’.

Yet the reclusive Axl continued to hog the headlines, previewing new material at sporadic live appearances and talking up his creative progress. While some of the tracks were inevitably leaked on to the internet, a concrete release date seemed assured for the second half of 2006. That was not the case as another few years passed (as did the revolving-door line-up; see discog for details) until CHINESE DEMOCRACY (2008) {*6} hit retail – the longest recording schedule ever at 14 years one thinks… no one hopes!

Anyway, the hype was over as it stormed into the US and UK Top 3 despite the long wait. Led by the hit title track (penned by Axl and Josh Freese), there were definite signs of creative genius, as tracks such as the OZZY-esque `Better’ blasted one back in time. Sharing compositions between a myriad of recent (and decade-long past members) including Paul Tobias, Dizzy Reed, Tommy Stinson, Buckethead, et al, one could certainly vouch for `Street Of Dreams’ (not the disco-fied `If The World’), `Catcher In The Rye’ and `I.R.S.’ – if this had been finished by the millennium, maybe more respect would’ve been due. 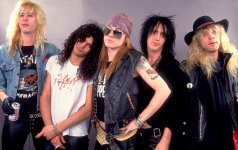