Staff member
"Distant Horizons" will not win over a lot of Hawkwind fans as it is less spacey than it is protopunk meets techno. The new sound is heralded from the outset with the title track that reminded me of the pulsating trance rhythms and techno of 80s glamlords Sigue Sigue Sputnik.

This is not the lineup that I prefer for Hawkwind but Dave Brock is a present force as usual on guitar, keyboards, synthesiser, FX and pitched vocals. Richard Chadwick's drums are a pounding powerhouse, Ron Tree is here on vocals, bass & audio generator, though the guitars are the main drawcard here played passionately by Jerry Richards, who also sings, and plays keyboards, with some programming & cubase sequencing.

The punkier sounds lock in on 'Phetamine Street', followed by a poppy jumping thing called 'Waimea Canyon Drive'. I didn't mind this though after the weirdness of the opening tracks. The rhythm is hypnotic and there are some cool harmonies and reverberated guitars.

'Alchemy' is more like the old Hawkwind, though perhaps has a sound akin to 'Assassins of Allah'. The guitar riff is appealing, and there are those spacey atmospherics we all have grown to love that are pure Hawkwind magic. The instrumental track sits easily as one of the best on this album, almost metal with distorted guitar pumping along with a wah wah lead break.

'Clouded Vision' follows with a melancholy atmosphere, a very sweet intro with spaceship swooshes and otherworldliness until Brock sings the first verse. He is in a sombre mood stating the usual thoughtful lyric "where do we go from here? Terror is not the answer, though it is a shame to see, will I ever discover what lies in store for me?" again, the track is different for this band but is still entrancing.

'Reptoid Vision' follows, with punk vocals and guitars distorted to the max. the guitar riff is okay but nothing special; I rather like the way it grinds along with the space effects, but the vocals are awful. At over 7 minutes this track really goes on too long. When the guitars drop out there is a nice spacey atmosphere but this could have been better as a different track rather than tacked onto the middle of this punk thing. The lyrics are off the planet, with musings about a centipede head, reptilian legs, escalator sidewalk, digital crystals, fire creator, tidal wave curve on the wrath of the ocean, and more!

'Population Overload' is permeated by swathes of keyboards and then a narrative about thousands being crushed, a strait jacket, a concrete vest, and questioning are we brain dead? It locks into a hypno beat with weird effects layered over, and later a great lead guitar riff. This is a very effective soundscape and Hawkwind are masters of atmospherics. What ruins it for me are the punkish vocals; I prefer Brock singing in his spacey mode, as on 'Orgone Accumulator' or 'Brainstorm'.

'Wheels' is one of my favourites as its got a grinding riff and a ton of spaciness, the narrative is deliriously Hawkwind, pondering about "this world of the wheel, this world of oil". The sound fluctuates from left to right at times and there is a trance beat with buzzing synth and familiar sounds of distortion. It even ends with crashing waves. Love that one.

'Kauai' is more serene focussing on quiet keyboards, and waves washing up on a beach. This is followed by 'Taxi For Max', a real oddity with whistling and it sounds like a piano is dropped, with some weirdness on vocals and effects. 'Love in Space' is familiar as it often makes its way onto the plethora of compilations available, though here there are no vocals at all. I have always liked it and I think it fits well on this album, though admittedly the vocals give it an added dimension, missing here.

Overall "Distant Horizons" is not half as bad as I had first thought given the era it was recorded when Hawkwind were just staying afloat. It is not the band at their best, that is a certainty, but it still delivers and has enough diversity and spacey coolness to make it worth a visit. Check it out for yourself; I am certainly glad I did. 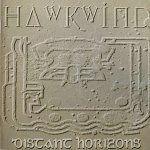