Staff member
The 17th studio album for the band "Electric Tepee" turned out to be quite an excellent album featuring some of their most endearing material since the masterful "Chronicle of the Black Sword". Since then the material has been very touch and go with many tracks just instrumentals with voice overs but on this album the songs are terrific and although the spaceship had crash landed in the past, the sound on this release is certainly a return to form. Ironically there were only 3 Hawkwind survivors after the crash landing, that being Dave Brock, guitarist, synth player and all round awesome vocalist, Alan Davey on bass and keys and Richard Chadwick on drums.

Brock is terrific on this album on such killer tracks as 'Right to Decide'; "you can't do this, you can't do that, you can't go forward and you can't go back". This track is certainly a wonderful song with trademark Hawkwind sound, chugging guitars, infectious melodies and chorus with loads of spaciness. This was a double vinyl album and fits nicely onto a CD to produce a lengthy and highly satisfying Hawkwind journey.

'LSD' has a familiar Hawkwind sound, electronic spaceytronics and a chugging riff. The vocals are echoed and forced as only Brock can to great effect. I like the way the track gets heavier and relies on distortion on guitar rather than synths. The band are breaking away from the synth domination of the 80s and getting into a heavier sound at this stage and it is a welcome change. 'The Secret Agent', 'Mask of the Morning' and 'Sadness Runs Deep' are all Hawkwind songs with heavier guitars and lengthy jamming improvised sections.

The more poppier songs are strange but a nice diversion though 'Mask of the Morning' wears out its welcome at over 9 minutes in length. Sure that works for the incredible 'Orgone Accumulator' from "Space Ritual" or 'Born to Go', but this track is not quite as good as these tracks to to fill out that much time. 'Sadness Runs Deep' is a delightful track with a wonderful Oriental flavour sounding a bit like the Arabesque music on Blancmange's excellent 'Living on the Ceiling'. It works here just as well, and for me is a highlight on the album, with some wah wah lead work and an odd time sig.

It is great to hear Hawkwind cranking out some hard rock especially 'The Secret Agent'. Brock enjoys a fast rapidfire delivery and tons of echo, as a spacey guitar riff cranks out, reminding me of 'Needle Gun'; "I'm a secret agent, What's your name, what's your game." The improvised jamming on this could have been trimed but it is enduring in its own way, at least the guys were rocking out.

Having said that Hawkwind still tend to meander in New Age ambient instrumentation with tracks such as 'Blue Shift'. This is very spacey and heavily permeated by mellotron sequences and sustained pads. Not all that inspiring but nice after the crunching opener. Next is 'Death of War', more narrated voices, and synths that the band wallowed in during the 80s. Others in a similar vein, instrumentals with odd effects, are 'Garden Pests' (a hypnotic phone ringing over some sequenced synths), 'Space Dust' (Pink Floyd influences), 'Snake Dance' (spacey electronica and Arabian style guitar melodies, like a futuristic snake charmer), 'Rites Of Netherworld', 'Don't Understand' (a hypno trance piece with spacey noodling and effects such as sound bytes from "Blade Runner"), 'Going To Hawaii' (lengthy ambient atmospheres and organic dreamy waves of synths and electronics) and 'Electric Tepee' (tribal chants and synths).

Being that this is a long Hawkwind album there is enough on offer to satisfy any Hawkwind fanatic. The instrumentals are okay as transitions to the songs but this is the first double studio release for the Hawkwind starship so no complaints from me. Overall it is one of the better Hawkwind 90s albums and a welcome return to form for the band. 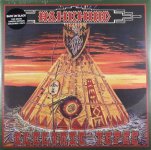