Staff member
Grossly underrated debut by one of the big name space rock acts. This is the album with the original recording lineup (Lemmy wasn't here yet, for one thing, and Dik Mik was still messing with sound generators rather than synthesizers). Huw Lloyd-Langton (pretty Welsh-sounding name) play additional guitar. What's strange about him is he left after this album only to return in the 1980s and play on many of their albums of that decade ("Levitation", "Sonic Attack", "The Church of Hawkwind", "The Chronicle of the Black Sword", "The Xenon Codex").

The album starts off with the blues-y "Hurry On Sundown", complete with harmonica. This song comes to prove that Dave Brock had previous experience playing in blues bands. After that you get lots of and lots of simply mindblowingly intense guitar jams and psychedelic effects. I can't see why this album gets slammed on, because the one thing I really like are the jams. The album then closes with "Mirror of Illusion", the only other vocal cut on this album, which closes off this often maligned album. To me, I enjoy this album a lot because it has that underground psych sound I like so much (even TANGERINE DREAM was doing something similar on their Electronic Meditation, it too often not too respected by their fans). I don't know how to recommend this album, but I think it's incredible regardless what has been said! 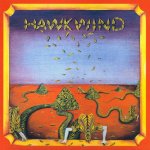