Hawkwind - In Your Area - Album Review

Staff member
It is not the first time that "Hawkwind" is mixing studio and live tracks. The very good "Palace Springs" was a good example of what could be achieved by this approach.

And even if the live tracks (the first six numbers) were recorded in my home country (at the "Ancienne Belgique" which is a legendary concert hall in Brussels which list of artists who have played there is absolutely impressive) I am a lot more skeptic about this one.

To have integrate a reggae part into the otherwise great "Brainstorm" is beyond my reach. I like reggae while played by "Culture" or "Steel Pulse", but I don't really need "Hawkwind" to do so. The other live tracks are fully on the heavy-hard-space-rock side of the band.

Comparisons with "Palace Springs" don't work in favour with this rather average "In Your Area". Very few great moments are available being live or studio tracks. "Diana Park" is probably the best one gets here, but it is .the closing song.

This is just an album for die-hard fans. Not deserving the one star rating but definitely no more than two. 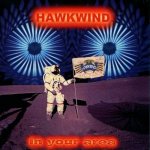