Staff member
A more polished than usual HAWKWIND, with some interesting folks on this album. Second guitarist Huw Lloyd-Langton had rejoined the band (first for the 1979 tour that became the Live '79 album), after being absent for about nine years (he previously appeared on their self-entitled 1970 debut). Tim Blake from GONG is on this one (as well as on the tour that became the Live '79 album too), and he often played his own composition, "Lighthouse" during live HAWKWIND shows around this time (you can find the original "Lighthouse" off his own solo offering, Blake's New Jerusalem from 1978, and him performing that song live with HAWKWIND on the album Live '79), but the big shocker of them all is who's playing drums here: none other than ex-CREAM and BLIND FAITH drummer Ginger Baker! What an odd inclusion to say the least! "Levitation" was actually meant to be recorded with previous drummer Simon King, but he bailed out halfway through the recording, so the drum tracks were replaced by Baker.

On a side note: I heard the reason why Baker left HAWKWIND around March 1981 was he had the idea of bringing in his ex-CREAM buddy Jack Bruce to replace Harvey Bainbridge on bass (apparently Baker and Bainbridge were not on good terms), but Dave Brock didn't like the idea (some person I met once told me that Brock felt there'd be too much of that CREAM sound if Baker brought in Bruce), and Baker left, to be replaced by a returning Martin Griffin (who appeared on the Hawklords album, "25 Years On from" 1978). Tim Blake had left the band by the time "Levitation" was released because he spent too much time talking to his girlfriend on the phone, where he was left behind during one show.

Other surprise to "Levitation": The album was recorded digitally. This was back in 1980, digital recording was still in its infancy, Stevie Wonder (starting with "The Secret Life of Plants"), Ry Cooder, and a little known Canadian prog act named TRUE MYTH were all recording digitally around this time, and HAWKWIND were obvious early newcomers to this technology. That gives "Levitation" a clean sound, but at least it doesn't have that synthetic and sterile sound that you might come across with too many digital recordings a few years later (specifically the mid-1980s and onward), no big '80s drum sounds, no synthetic-sounding synthesizers here. And at least Tim Blake was still using his old Mini Moog and Synth "A" synthesizers, plus a polyphonic synth (which I believe he also used on Blake's New Jerusalem).

So what you have, thankfully, is HAWKWIND still remaining true to themselves, although this one is a bit more song-oriented than they often do, making it one of their more accessible albums. Highlights for me include "Motorway City", "World of Tiers", "Who's Gonna Win the War", "Space Chase" and "Dust of Time". "Prelude" is a cool electronic piece from Tim Blake, giving a brief example of what might have happened if he released a third solo album in 1980 (of course, Blake didn't record another solo album until 1991 with Magick). Meaning if Blake released a third solo album in '80, rather than '91, it could've ended up as a rather mindblowing album, as "Prelude" shows.

Another worthwhile album to have if you're in to HAWKWIND. 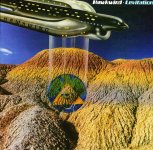 Nothing like Brock, Baker and the boyZ on this one......killer bassline/drumming gets under my skin and stays there forever