Staff member
Hawkwind are, of course, the quintessential 'Psychadelic Space Rockers', renowned for lengthy 'spacey' jams played over a throbbing driving bedrock of bass and drums. But over their 35+ year history, they have not only had many changes in line-up, but also changes in their sound. As they moved into the 90s they became more 'industrial', with songs becoming more and more dependant on keyboards and sequencers (one album would be entirely so). In 1990 the great days were long past but they still had something to offer as this album shows.

The most notable thing about Space Bandits is the principal singer - namely Bridgett Wishart. An old friend of Richard Chadwick, Bridgett had begun to hang around the band and first played with them in the summer of 1989, becoming their full-time singer early in 1990. Her voice suits the material well, indeed it is a natural fit, and she brings a new dimension to the songs. It all ended in tears a year or two down the road and sadly this is the only studio album recorded with her.

Images opens the album on a high. Beginning with a guitar motif - which reminds me of ELO - it soon kicks into a 174 bpm Hawkwind-Heavy-Metal blast. This is Hawkwind almost at their best, with all the essential spacey elements in place - including some lovely violin from Simon House and some sympathetic keyboard fills - and Bridgett's voice holding it all together admirably. A mid-song ambient break allows a breather before the frenetic Chadwick/Davey/Brock combo stampede back for a final power freak-out.

Black Elk Speaks is a spoken word ambient piece: Black Elk - a Sioux - recites a prayer to 'Grandfather, Mysterious One'; which is followed by a short poem by Bridgett. Proceeds from the publishing of this song go to the Sioux Pine Ridge Reservation. The instrumental backing is somehow quite evocative - of the plains, camp-fires, peace-pipes etc.

Wings was written by Alan Davey in response to the Exxon Valdez oil spill and the enormous harm it did to wildlife. It is actually my favourite track here - it is not instrumentally fantastic, it is not spacey in any way, and it doesn't have outstanding lyrics. But there is something about the way it jogs along, with plaintive sound effects and sad vocals from Bridgett (and Alan) which somehow contrives to evoke an almospheric image of desolation. Proceeds from this one are donated to a British wildlife charity.

The album begins to tail off after that. Out Of The Shadows returns to the 'Hawkwind Sound' of Images, but at a somewhat more sociable pace! Lots of sound effects support a mainly guitar-led one-chord bash, with Brock taking the lead both instrumentally and vocally. Interesting that the drums sound much more organic here, but ultimately the song is a little unsatisfying as the music doesn't seem to achieve anything, instead moving aimlessly and inexorably towards a segue with the next track.

Realms is ambient noodling, nothing more than forgettable filler, full of generic pads and washes which lead into ..... Ship Of Dreams, which begins as another keyboard-led, heavily sequencer-dependant 'song' with short spoken vocal (Brock) and lots of effects. It picks up when a lovely distorted guitar joins the party though the voice becomes unintelligible, and there is a cute bit of folksy 'jigging' courtesy of House's violin. But it doesn't really hang together as a cohesive piece of work. It's almost a backing track in search of a song. No focus.

TV Suicide closes the album with an array of effects and sounds sampled from TV added to another 'keys and sequencer' led soundscape. The simple lyrics about the dangers of TV are presented by a spoken male voice (Bainbridge?). But it is all ineffectual and ends with a return to generic pads and washes to fade.

This is very much a transition album for the band: it sees them branching out into the new technology of samplers and sequencers; and it marks an upturn in the quality of their recorded material after a few years in the doldrums. This is not, however, a 'return to form' but merely a swing in the right direction. A major criticism of this new 'industrial' direction, is their inexpert use of sequencers: at that time Chadwick, in particular, was unfamiliar with drum sequencers but found it necessary to use them because he was otherwise unable to play Images on a live kit. A consequence of this inexperience is the 'over-quantisation' of the drums, most noticeable on Images.

The first three tracks are worthy additions to the repertoire, and Hawkwind fans - especially those of the later 90s/00s output - should find something to like here. Newcomers, however, should be advised that there are better examples of their work.

8. Out Of The Shadows (Live Studio version) * 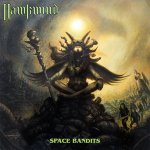