Staff member
They were formed on Christmas Day in 1975, went through dozens of lineup changes until they settled on their most stable lineup 8 years later. Most bands are not even around for that amount of time, but somehow, the UK metallers survived their growing pains and made it as one of the most successful heavy metal bands of all time. It's currently September of 2006, and just a few short/long (take your pick) weeks ago the band released their 14th album, A Matter of Life and Death. After listening to it constantly the last couple weeks, I decided to look back on Maiden's previous efforts, of course starting with 2003's Dance of Death.

Like the new Maiden album, Dance of Death seems to be one of those albums that will receive plenty of praise and at the same time, plenty of criticism among fans. As with both Brave New World and A Matter of Life and Death, this album contains longer tracks with plenty of soft intros, winding interludes, and time changes that can change on a dime. Though Steve and Co. haven’t completely mastered this new take on song writing, through songs like Paschendale, Dance of Death, and Face in the Sand, Iron Maiden shows that not even Father Time can slow them down, or at least, not yet.

Dance of Death features a few surprises, a few new elements that have not been present on any of their other albums. First off, Maiden drummer Nicko McBrain's first ever writing credit comes on the album. The song, titled No Frontier, is surprisingly better than one would think, though certainly not a classic Iron Maiden track. No Frontier starts off weakly, but eventually round out to be a pretty enjoyable track. Notable is both the very catchy chorus, and the two energetic solos from Smith and Murray. The other surprise is the closing track, simply titled Journeyman. Never before has an all acoustic song been found on an Iron Maiden album, and the band decided to change that here. Journeyman is an impressive mid-paced 7 minute outer with excellent lyrics. The song is very epic sounding, especially the long build up in the middle of the song, with an emotional feeling to it that is only matched by the likes of Paschendale. Though the song contains no solo, it is among my favourite songs off Dance of Death and certainly one of the best.

Interestingly, the Dance of Death album contains not only Iron Maiden's best song, Paschendale, but it also contains one of their worst, a track titled Gates of Tomorrow. With its boring, uninspired riffs, annoying rhythm, and bad lyrics, Gates of Tomorrow is a very forgettable track and does not represent the attitude of Dance of Death very well at all. On the other hand, Paschendale gives listeners a real taste of what the album tried to accomplish. With its heavy riffs, operatic vocals, melodic instrumentals, emotional lyrics and atmosphere, Paschendale is quite easily the ultimate Maiden masterpiece. Along with the likes of Hallowed Be Thy Name, Powerslave, and Rime of the Ancient Mariner, Paschendale has Maiden achieving their full potential in a track that best exemplifies the theatric moments the band was shooting for on the Dance of Death album.

Though the album contains many long epics of at least 6 minutes, Iron Maiden does not forget their past. No, there are a couple tracks that pay homage to their past efforts. The likes of Montsegur and Rainmaker remind fans of the highly energetic 80's sound that had become such a hit among metal fans. Montsegur in particular could easily fit on the Piece of Mind album and not look out of place. Wildest Dreams and New Frontier are also shorter songs similar in structure to the previously mentioned tracks, and contain many of the same high energy characteristics.

With Dance of Death, Iron Maiden sought to continue their musical growth, taking the long prog rock influenced sound found on their reunion album Brave New World, and adding a new epic, theatrical twist to it. With cuts such as the title track and Paschendale, they certainly succeed, producing an album that although long, is very interesting to listen to. Don't let the terrible art work deter you from purchasing this album, as it deserves a spot in your CD collection.

Tracklist for Dance of Death: 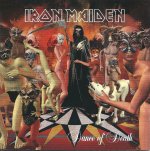