Staff member
Line-up changes, line-up changes. Well, in this case, the changes were nothing but positive. John Wetton ( most famously ex-family ) and Bill Bruford ( most famously ex-yes ) step up to join Bob Fripp in his pursuit of 'something or other'. That's the best way to describe it, really. Ably abetted by assorted sundry - out pops 'Larks Tongues In Aspic', easily the most enjoyable King Crimson record since their debut offering. The material here isn't always as good as the playing - much of the material here had origins in the line-up that recorded 'Islands', after all. Still, add in two muscians both of more than capable pedigree and you have something. John Wetton was a versatile, reliable and at times powerful, bass player. Bob Fripp was still developing as a muscian himself. Bill Bruford, with his jazz leanings and amazing power and actual way with melody - quite rare for a drummer - the icing on the cake. Much icing, delicious icing. Bill Bruford will always be mostly associated with his time spent with Yes, but his work with King Crimson during this era is perhaps the best work of his career. Bill Bruford suited King Crimson, it's as simple as that. Bill Bruford brings something special to this record, something in particular that perhaps no other drummer around at the time would have been able to bring. Playing with Yes had certainly expanded his horizons as a player, he left Yes to expland them further. Being part of the King Crimson collective certainly enabled him to do that.

The opening 'part one' is very avant-garde in the manner that Bob Fripp had been starting to pursue with seemingly ever greater vigour, it would seem. Thirteen and a half minutes of music that comes alive with the almightiest of scary riffs near the four minute mark. Violin punctuates the track most effectively, adding to the horror-show nature of the piece. The drums are simply stupendous, so powerful all of a sudden. During his early days with Yes, Bill played a lot 'more' drums that perhaps he did later during the likes of 'Close To The Edge'. Come his time with King Crimson, he was able and encouraged to play whatever he liked. Added to his indisputable mastery of the drums, one of the very best drummers around at the time - this produces something very special throughout the vast majority of this opening track. As a song, it's a dog. As an artistic, avant-garde piece of 'art', it's saved by the playing of Fripp and Bruford, in particular. Not to forget John Wetton, however. Aside these two maestro's, he conducts himself brilliantly, with some stupendous parts of his own at times. Listening to a track almost purely to appreciate the musicianship isn't something I ever used to do, but with playing as awesome sounding as this - whatever the actual track/piece is like in terms of structure, etc - almost doesn't matter.

A word about the vocals. John doesn't do as good as job as original vocalist Gregg Lake, but he certainly sounds better than the other guys after Gregg Lake. Still, we move on. Some sweet melodies during parts of both 'Book Of Saturday' and 'Exiles'. 'Easy Money' which follows, almost manages to be funky. It actually grinds in places, quite something. Perhaps the vocals are a little strained during 'Easy Money', not entirely the best vocal performance the song demanded, but it's not bad, or anything. Anyway, one problem with this album, which I hinted at earlier. Something like 'The Talking Drum' ends up impressing through the sheer joy to be had at beholding the muscianship. Ultimately however - with musicians of lesser calibre, the material or ideas alone certainly wouldn't be enough on their own. Lending to my theory the material itself isn't exactly strong here. Still, the closing 'Part Two' opens all scary as hell, includes some quite frankly astonishing guitar, drum and percussion work - and leaves you breathless and slightly impressed. 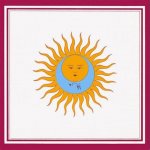