Staff member
Whether one’s a fan of the GABRIEL-era, GENESIS-cloned 80s MARILLION model, fronted by the flamboyant FISH, or a loyal devotee from the emerging decades (led by the musically betrothed Steve Hogarth), or even a mixture of both alumni, the enterprising MARILLION have kept prog-rock vibrant and virile.
While most “classic-rock” GENESIS fans were happy to subscribe to Fish and Co’s fantasy-driven neo-prog, while messrs Banks, Rutherford and Collins, plus the solo PETER GABRIEL were out to lunch, MARILLION filled a gap between servings. Starting points in their three-decade-long lifespan are surely the riveting first three studio sets (released between ’83 and ’85), records filled with a myriad of top hits, including `Garden Party’, `Kayleigh’ and `Lavender’.
Formed initially as Silmarillion in 1979 by drummer Mick Pointer and bassist Doug Irvine, in Aylesbury, Buckinghamshire, they took their name from a J.R.R. Tolkien novel. Adding along the way, guitarist Steve Rothery, keyboardist Brian Jelliman and Doug’s replacement (late 1980), Diz Minnitt, there one was one other main ingredient needed for the MARILLION pot – ambitious singer, Fish (aka Edinburgh man, Derek Dick). Not content with shuffling the band beyond recognition, probably at a time when no one really cared, in March 1982, Jelliman and Minnitt proved surplus to requirements when Irishman Mark Kelly and Pete Trewavas took their respective berths.
The quintet had now been gigging for over three years and had built up a sizeable following, something that E.M.I. Records had noticed before securing them a major deal. Soon afterwards, the company issued `Market Square Heroes’; the single denting the Top 60. Surprisingly, given their prog-rock pretensions, MARILLION were duly voted the best newcomer in the rock-centric (now defunct) Sounds music weekly. A second single, `He Knows You Know’, hovered outside the 30 mark, an excellent track that preceded the release of the band’s debut album, SCRIPT FOR A JESTER’S TEAR (1983) {*9}. Featuring one of their best-loved tracks, `Garden Party’ (which gate-crashed the Top 20), the set eased into the Top 10 on the strength of the song, plus the wondrous title track, `The Web’, `Chelsea Monday’ and `Forgotten Sons’; incidentally, all clocking in at over eight tight, prog-long minutes.

A harder-edged affair, the follow-up Top 5 album, FUGAZI (1984) {*7}, strengthened the band’s reputation among British rock fans looking for a genuine alternative to the AOR-brushed material churning out of America. Prior to its recording, Pointer had been ousted, although quick-fire drummers, Andy Ward (of CAMEL) and, in turn, Jonathan Mover, were unsuitable as Ian Mosley (from STEVE HACKETT’s band), revealed he knew more than most about the prog-style requirements. `Punch And Judy’ and `Assassing’ were both edited down for releases as Top 30 hits, although fans at the time salivated over finale pieces, `Incubus’ and the title track.

A souvenir from the live-in-concert aspect of their time up to now, the rather unnecessary REAL TO REEL (1984) {*6}, stretched out a few favourites. But it was with their third studio set, that wooed the mainstream, together with the attendant and wistful love song, `Kayleigh’, a near chart-topper and an integral part of the conceptual yet accessible Chris Kimsey-produced MISPLACED CHILDHOOD (1985) {*9} opus. Entering at pole position, the album also featured another top selling nursery rhyme-type ballad, `Lavender’, and transformed MARILLION into a stadium-filling live proposition. America, meanwhile, proved somewhat impenetrable, the aforementioned `Kayleigh’ (and its parent set) only scraping into the lower chart regions. Taken out of its comfort-zone context, `Heart Of Lothian’ (an appropriate Caledonian chant for name-checking Fish), the track was another Top 30 breaker, while the set’s other tapestry of delights (on top of the excellent `Childhood’s End?’), were the medley-ised `Blind Curve’ and `Bitter Suite’. A GENESIS connection was in place in 1986, when TONY BANKS invited the FISH man to sing guest vocals on his filmic piece, `Shortcut To Somewhere’.

By 1987’s top-selling CLUTCHING AT STRAWS {*8}, Fish was uncomfortable with his newfound popstar status, his drink/drug problems fuelling speculation of an imminent split. The Kimsey-produced album itself showcased the man in all his pomp and ceremony, and as MARILLION were in need of some self-parody, provided by major smash, `Incommunicado’, beautiful ballads like `Sugar Mice’ and `Warm Wet Circles’, proved there was a softer side to the big yin. However, the rumours proved all too true, when, just prior to the release of a double live set, THE THIEVING MAGPIE (LA GAZZA LADRA) (1988) {*6}, FISH hooked up with other musicians to form his own self-named band.

While the singer delayed the delivery of his debut, “Vigil In A Wilderness Of Mirrors” (1990), MARILLION decided to dust themselves down and carry on regardless, having found a worthy replacement in Steve Hogarth. An unknown quantity to many (although he had fronted minor chart group, The EUROPEANS), the new geezer’s fluid, unassuming style nevertheless won over the majority of MARILLION fans, taking the band into unknown territory with the album, SEASONS END (1989) {*8}. A more than competent set, the record’s poignancy came through hit singles, `Hooks In You’, `The Uninvited Guest’ and `Easter’. Despite their flight into fanciful, ASIA-type diversions, neo-prog was restored through epic dirges, `The King Of Sunset Town’, `Berlin’, `The Space…’ and the title track. A great start for Steve, and altogether a different kettle of Fish.

1991’s diluted Christopher Neil-produced HOLIDAYS IN EDEN {*6} was cut from similar cloth, and while it reached the Top 10, slick and sophisticated was the word on the street for the likes of `Cover My Eyes (Pain And Heaven)’, `No One Can’ and `Dry Land’. Okay, they’d finally lost that dreaded GENESIS tag, but accusations of echoing The ALAN PARSONS PROJECT, STYX or U2, were rife among the critics. The following year, to match a decade-spanning “Singles Collection”, MARILLION tried in vain to carry off a cover of RARE BIRD’s `Sympathy’, although the record still managed a Top 20 placing.
MARILLION increasingly found it hard to recapture the momentum of their halcyon days, that is, until 1994’s brilliant return to their conceptual roots with the album, BRAVE {*8}. This fusion of folky melodic rock and quasi-ambient atmospherics was their first to crack the Top 10 for some time. While attendant singles (`The Hollow Man’ and `Alone Again In The Lap Of Luxury’) fitted hand-in-glove to the symphonic little-girl-lost medley, `Goodbye To All That’, echoing some sort of “Lamb Lies Down On Marillion”.

Harking back to “Jester’s Tear” and “Fugazi”, AFRAID OF SUNLIGHT (1995) {*7}, continued the band’s renewed interest in the prog-concept set; tracks such as the nightmarish `Cannibal Surf Babe’ and final hit for some time, `Beautiful’, stretched MARILLION’s spectrum beyond mere keyboard-orientated rock. Their first live-in-concert piece featuring Hogarth, MADE AGAIN (1996) {*5}, was strictly for the fans, containing as it did selections from sold-out arenas from as far back as ‘91 (including re-vamps of `Kayleigh’ and `Lavender’), plus the glorious “Brave” in its entirety.

Finally parting company with E.M.I. after a decade and a half, and now on Raw Power (rawk’s twilight home), MARILLION subsequently released their 1997 set, THIS STRANGE ENGINE {*5}, a more accessible outing than previously. Its acoustic musings stood in contrast to RADIATION (1998) {*6}, a return to meatier, more conceptual waters which nevertheless retained an oblique pop edge.

To their credit, the band seemed unwilling to sit on their laurels and churn out music specifically created for their cult fanbase, instead making a concerted effort to update their influences in line for the new millennium, as witnessed on weak-link MARILLION.COM (1999) {*5}. As artsy-fartsy as a multitude of dinosaur of prog-rockers, one couldn’t help recalling 10CC, The BEATLES or TALK TALK on epic tracks such as `Interior Lulu’ and `House’.

The wittily-titled ANORAKNOPHOBIA {*6} followed in 2001. In a novel attempt to free themselves from the shackles of a record company advance, the band financed the recording of the album with funds from 12,000 fans (who dutifully pre-ordered their copy before it was recorded), ironically letting their creative impulses stray from the prog template which so long served them. Accompanied by an infamous press release pleading for economy in using the p**g tag, the album was an admirable shot at casting off for pastures contemporary.

So successful was the strategy that MARILLION employed it again on MARBLES (2004) {*6}, crediting the names of their donors in the sleeve-notes. Not only was the music more au fait with modern palettes, but for the first time since the FISH-fronted `Incommunicado’, MARILLION reached the Top 10. While the album itself didn’t reach these heady heights, lead single `You’re Gone’ did maintain that status, and follow-up `Don’t Hurt Yourself’, also went Top 20, again underscoring the latent potential in globally connected fandom. MARBLES LIVE (2005) {*6} was another contemporary move, documenting a performance of the album in its entirety.

Now masters of their own fate when founding their own Intact imprint, SOMEWHERE ELSE (2007) {*5}, sold enough records to ease into the Top 30, although it was hard to see the point of the double-volume, RADIOHEAD-meets-COLDPLAY-type outings, HAPPINESS IS THE ROAD (2008): also released separately as ESSENCE {*7} and THE HARD SHOULDER (*6}. The acoustic LESS IS MORE (2009) {*6} showed MARILLION in another light; American fans treated to a cover of RADIOHEAD’s `Fake Plastic Trees’.

Still a Top 50 proposition in 2012, MARILLION proved their adventure-packed, near-30-year lifespan hadn’t stalled by way of umpteenth set, SOUNDS THAT CAN’T BE MADE {*7}. Bolstered by three tracks over the 10 minute mark (including 17-minute opening salvo, `Gaza’), MARILLION looked to be unjaded by their younger corporate cousins.

Sick of nu-concept sets littering the market? MARILLION were not! As close to PINK FLOYD’s The Wall in its elaborate tendency to place paranoia and political greed among the world’s maddening and impending global ruination, 2016’s F E A R (FUCK EVERYONE AND RUN) {*8} was disturbingly thought-provoking. Basically dispensing their melodic majesty through three multi-part suites (`El Dorado’, `The Leavers’ and `The New Kings’), the soaring Hogarth and Co were again inhabiting a Top 5 chart position not seen since the halcyon days of you-know-who. Not as intense as a DREAM THEATER alloy or even dipping their toes into 70s nostalgia, MARLLION’s was a passionate prog-rock that had a future – well, let’s hope it has, for all our sakes! 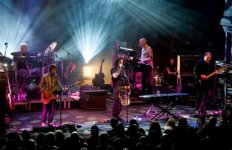