Staff member
Ireland’s number one rock music export, THIN LIZZY were the bees knees in the live arena of the mid-to-late 70s, spurred on as they were by their stylish singer/bassist PHIL LYNOTT, a ferocious showman and a working-class poet of the people – despite coming from the hardship of being of Afro-Guyanese-black on his father’s side and Irish-white stock on his mother’s. THIN LIZZY progressed from a romanticised, Celtic-infused trio to a twin-axed heavy-rock quartet in the space of a few years; Scott Gorham and Brian Robertson fighting over lead guitar licks from 1974, while future solo star GARY MOORE (and several others) lay in wait for the odd personnel mishap.

Formulating in Dublin at the turn of the 70s by former Belfast musicians, Eric Wrixon and Eric Bell (both of whom established themselves – though not together – with Van Morrison’s THEM), THIN LIZZY were completed with the arrival of the youthful Phil Lynott and drummer, Brian Downey; both performing at the time under the name of Orphanage. Parlophone Records in Ireland launched the quartet (then known as Thin Lizzie) via a single, `The Farmer’, although poor sales led to Wrixon bailing out; in 1979, he would again be part of THEM.

At the suggestion of managers, Ted Carroll and Brian Tuite, having already signed to Decca Records, the remaining trio relocated to London in early ‘71. The eponymous THIN LIZZY (1971) {*5} didn’t quite hit the mark, but the LP had its patrons and backers via Radio One DJ, John Peel, and Radio Luxembourg’s Kid Jensen. Possibly a tad enamoured by the untimely passing of his hero JIMI HENDRIX (and his “Experience”), main songwriter Lynott and his team sounded unpolished and rough around the edges; but there were emotive lyrical fare by way of `Look What The Wind Blew In’, `Saga Of The Ageing Orphan’ and the Mellotron-friendly `Honesty Is No Excuse’. Although only four tracks (highlights, `Remembering Part 2’ and `Things Ain’t Working Out Down On The Farm’), the exclusive “New Day” EP, showed enough promise to keep the ball rolling.

Lizzy’s sophomore set, SHADES OF A BLUE ORPHANAGE (1972) {*4}, was another to pass without garnering much attention. Bookended by a couple of null-in-void numbers to fill in 14 minutes, the record’s only saviours came through `Baby Face’, `Buffalo Gal’ and a paean to Phil’s guardian/granny, `Sarah’.
With folk-rock the focus of many a hard-edged band (Celtic, or otherwise!), THIN LIZZY shot out of the blue and into the UK Top 10, with their raw, highly original adaptation of Irish pub ballad, `Whisky In The Jar’ – spelt mysteriously from the Scots verbatim – marrying plangent lead guitar and folk-music to memorable effect. The not-so-popular flop, `Randolph’s Tango’, put paid to any solidifying chart presence, resulting in low sales for the band’s third set,

VAGABONDS OF THE WESTERN WORLD (1973) {*6}. Containing none of the aforementioned 45s (or their B-sides), it a least drew in several favourable reviews, while accompanying gem-of-a-single, `The Rocker’ – surely was one that got away. There were signs that Lizzy were finding their feet, other tracks such as `Mama Nature Said’, `Little Girl In Bloom’ and the (“Vagabond”) title track, were effective without raising the bar too high.

Bell departed later that year, his replacement being ex-SKID ROW axeman, Gary Moore, the first of many sojourns the guitarist would enjoy with the band over the course of his turbulent career. He was gone by the spring tour of the following year (subsequently joining jazz-rockers, COLOSSEUM II), the trademark twin-guitar attack introduced on these gigs courtesy of John Cann and Andy Gee. They were duly replaced more permanently by Scott Gorham and teenage Scotsman Brian Robertson, while THIN LIZZY signed a new deal with Vertigo Records, who released the NIGHTLIFE {*6} set late in ‘74. Showcasing the talent of another Scotsman, FRANKIE MILLER, Lynott’s most romantic ballad to date, `Still In Love With You’ (allegedly authored/co-authored by the vacating MOORE), seduced his expansive female following, but it was the kicking `Sha-La-La’, `She Knows’ and the funk-driven `It’s Only Money’, that won over future record buyers.

Neither this album nor 1975’s FIGHTING {*7} succeeded in realising the group’s potential, although the latter gave them their first Top 60 entry in the album chart. Gorham and Robertson’s interplay seemed to gel on this set, a set that opened with a glorious rendition of BOB SEGER’s `Rosalie’. Inspired by the latter act and the likes of SPRINGSTEEN, THIN LIZZY came of age here as they rattled off mini-jewels such as `Suicide’, `Ballad Of A Hard Man’ and Robertson’s sole contribution, `Silver Dollar’.

Partly due to the group’s blistering live shows and partly down to the massive Top 10 chart success of `The Boys Are Back In Town’, parent set JAILBREAK (1976) {*9} became a cross-atlantic Top 20 breakthrough. One of Lizzy’s most consistent sets of their career, it veered from the power-chord rumble and triumphant male bonding of “Boys…” to the epic Celtic clarion call of group composition, `Emerald’. The brooding, thuggish rifferama of the title track was another highlight, Lynott’s rich, liquor-throated drawl sounding by turns threatening and conspiratorial.

JOHNNY THE FOX (1976) {*7} nearly followed it into the UK Top 10 later in the year, a record which lacked the continuity of its predecessor, but nevertheless spawned another emotive, visceral hard rock hit single in `Don’t Believe A Word’; `Borderline’, `Massacre’ and the story-centric `Johnny The Fox Meets Jimmy The Weed’, pushed their boundaries at a time when punk-rock was just around the bend.

Phil’s dramatic and theatrical character-driven lyrics were what marked THIN LIZZY out from the heavy-rock pack; his outlaw-with-a-broken-heart voice and the propulsive economy of the arrangements were light-years away from the warbling and posturing of 70s proto-metal. Accordingly, Lizzy were one of the few rock bands who gained any respect from punks and indeed, Lynott, subsequently formed an extracurricular project with The DAMNED’s Rat Scabies, as well as working with some of the band and ex-SEX PISTOLS, Paul Cook and Steve Jones (as The Greedies on the Xmas 1980 single, `A Merry Jingle’).

A 1977 American tour saw a returning Moore fill in for Robertson, who’d severed tendons in his hand in a fight, although the guitarist was back in place for a headlining spot at Reading Festival later that year. Drug dependency and a bout of hepatitis also dogged progress for Lynott.

The Tony Visconti-produced BAD REPUTATION (1977) {*7} graced the Top 5 (and US Top 40), its strength lying between the swinging/swaggering of `Dancing In The Moonlight (It’s Caught Me In Its Spotlight)’ smash hit – very much in the vein of Celtic compatriot, VAN MORRISON – and the rambunctious title track.
But it was through blistering live work that THIN LIZZY had made their name, and they finally got around to releasing a concert double-set in 1978. LIVE AND DANGEROUS (1978) {*9} remains deservedly revered as a career landmark, as vital, razor-sharp and unrestrained as any of its kind in the history of rock. Premiered by a Top 20 bravado collision medley of `Rosalie’ and `Cowgirls’ Song’, it highlighted near-forgotten re-vamps of the early songs alongside classic-rock repertoire.
Later that summer, THIN LIZZY again took to the road with Moore (Robertson departed to form WILD HORSES) undertaking his third stint in the band alongside Mark Nauseef, who was deputising for an absent Downey. Previewed by the keening exhilaration of third Top 10 hit, `Waiting For An Alibi’, BLACK ROSE: A ROCK LEGEND (1979) {*7} was the last great Lizzy album. Placing all-out rockers alongside more traditionally influenced material, the set produced another two major UK hits in the defiant `Do Anything You Want To’ and the poignant `Sarah’, the latter a new and beautifully realised tribute to Phil’s baby daughter.

GARY MOORE, meanwhile, had been enjoying solo chart success with `Parisienne Walkways’, the Lizzy frontman guesting/credited on vocals. By late ‘79, MOORE was out, however, and Lynott secured the unlikely services of another Scot, MIDGE URE, to fulfil touring commitments. When the latter subsequently departed to front ULTRAVOX, the frontman replaced him with ex-PINK FLOYD man, Snowy White.

Early 1980 saw Lynott marrying Caroline Crowther (daughter of TV celeb, Leslie), and it seemed the man had finally settled down to domesticity; the unadventurous “Solo In Soho” caught fans off-guard as LYNOTT showed another side to his versatility.

Later that year saw the release of CHINATOWN {*5}, although the Midas touch was lost when Top 10 breaker `Killer On The Loose’ received restricted airplay in the event of the serial killer “Yorkshire Ripper” spate of murders; `We Will Be Strong’, `Sweetheart’ and the hit title track were above the pop-rock crimes on board here.

When `Trouble Boys’ failed to register a Top 50 placing and its overblown parent set, RENEGADE (1981) {*4} followed it to bargain-bin status, THIN LIZZY’s popularity or “bad reputation” was clearly on the wane as they struggled to maintain any momentum; `Hollywood (Down On Your Luck)’ also stalled at No.53. Meanwhile, the singer received short-shrift for his hook-line sophomore solo set, “The Philip Lynott Album”, in 1982.

With the addition of ex-TYGERS OF PAN TANG guitarist John Sykes and keyboardist Darren Wharton, THIN LIZZY released something of a belated comeback album in the Top 5, THUNDER AND LIGHTNING (1983) {*6}. `Cold Sweat’, the head-banging title track and `The Sun Goes Down’, sold with decreasing sales figures and it was to be the group’s studio swansong. By the release of concert set, LIFE – LIVE (1983) {*5}, the group had already split; Lynott, and initially Downey, formed the short-lived GRAND SLAM.

PHIL LYNOTT eventually carried on with his solo career in ‘85, after settling his differences with MOORE. The pair recorded the driving `Out In The Fields’, a resounding Top 5 hit and a lesson in consummate heavy-rock for the hundreds of dismal mid-80s bands wielding a guitar and a poodle haircut. A follow-up single, `Nineteen’, proved to be LYNOTT’s parting shot, his life curtailed after dying from a drugs overdose on the 4th of January 1986 – he was only 35. As family, rock stars and well-wishers crowded into a small chapel in Southern Ireland for LYNOTT’s low-key funeral, the rock world mourned the loss of one of its most talented, charismatic and much-loved figureheads. Towards the end of the millennium, THIN LIZZY (Gorham, Sykes, Wharton, plus journeymen rhythm team, Marco Mendoza and Tommy Aldridge) played several LYNOTT-tribute shows; concert set ONE NIGHT ONLY (2000) {*4} evidence that their late great frontman was sadly missed. Ditto LIVE IN LONDON 2011 {*5} recorded at Hammersmith Apollo, with The ALMIGHTY’s Ricky Warwick (vocals/guitar) filling the boots of Phil; guitarist Vivian Campbell playing a role before swanning off to join the ranks of DEF LEPPARD; HIGH VOLTAGE: RECORDED LIVE (2011) {*4} was an unnecessary addition to any collection.

Thankfully, out of respect to the great LYNOTT, Gorham, Downey and Co decided on a change of moniker, taking the name BLACK STAR RIDERS, from the outlaws in the movie, Tombstone; Downey found it tough going and duly departed (as did Wharton; replaced by veteran Jimmy DeGrasso) before the recording of the Top 30-selling, “All Hell Breaks Loose” (2013). 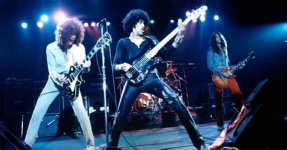