Yes - Close To The Edge

Staff member
Ten seconds of silence. Forty seconds of atmospheric new age sounds then the jazz rock fusion kicks in. Drums do things, the bass concentrates hard and the guitar twists, spirals and turns. Around the three minute mark a decent melody appears and a little later a funky, almost reggae-fied bass rhythm. This supports the introduction of the opening vocals well. And, there you have the beginning of this 'Close To The Edge' album! It's a thrilling way to open. You can almost see the studied concentration of all involved whilst laying down the parts in the studio. It sounds perfectly natural however. And, makes me think. Yes and progressive rock in general have got a bad press over the years. Around the ten minute mark, the third section 'I Got Up, I Get Down' kicks in. Or, rather more accurately, floats dreamily in. I adore this part! Ethereal, beautiful vocals. What sounds like a church organ adds to the spiritual feel of this piece. 'Close To The Edge' the song, ends by returning to jazz influenced rock music. Superb playing from all involved. Melody too. Decent vocals. All is well!

'And You And I' begins the second half of the album. A song that starts with nicely strummed guitars and melodic vocals. A quiet, atmospheric song. Keyboards add to its relaxing dream world feel. The vocals sound off in the distance. In a good sense. Nicely atmospheric. The third section, 'The Preacher And The Teacher' shifts the mood. Decent melody. A decent song all round! Not as astonishing perhaps as opener 'Close To The Edge' but it plays its part in the album as a whole extremely well. Under 40 minutes in length this record. It doesn't really do anything unnecessary. Everything here plays a part in adding to an overall cohesive listening experience. The closing 'Siberian Khatru' ups the tempo, funky bass and good guitar work dominate this piece. I love the little medieval keyboard solo in the middle! It rocks out a bit later on. The vocals with added echo and harmonies are surprisingly effective but the guitar and bass work dominate this song. Tight, accomplished, enjoyable listening. Absolutely nothing here on the album is lacking in any obvious way. Fans of Green Day probably won't like it. Nothing against Green Day fans but you know. This is an involved musical experience. It could have done with another song perhaps - a nice atmospheric closing sequence. It's a minor quibble. This is an album that rewards repeated listening, is frequently beautiful - and highly recommended. A wonderful record.

Track Listing:
Close To The Edge
And You And I
Siberian Khatru 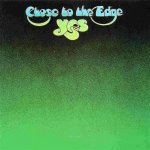