Staff member
The almost classic Yes lineup reunite for the first time in nearly decades for an almost new album! It gets much more exciting than this, but Yes fans were still pretty expectant at the time. Two brand new songs. Lots of live classics played by men now older than they were when they were still relevant in any way whatsoever. Rick Wakeman! Chris Squire, Jon Anderson. Erm, Alan White. Bill Bruford? Sadly not and his absence is felt. Alan is a fine drummer but he just hits the drums differently. Bill always sounded like he was attacking the drums by beating them into some other ( jazz ) shape and made the songs a lot more interesting. Alan is too straight rock music at times. Otherwise, Yes sound remarkably unaffected by age or changing events in the world. Well, for the live tracks at least. ‘Roundabout’ and ‘Starship Trooper’ are just two of the favourites here and both are impeccably played. ‘Be The One’ is a lengthy ( surprise! ) and largely tuneless non-event. Jon writes a love song for 80s radio and as well as lacking a tune it lacks distinction. It sounds no better ( possibly even worse ) than the worst non-classic line-ups Yes inflicted upon us during the entire nineteen eighties. Oh, 'Revealing Science Of God' gets a big cheer from about the four people nearest the stage! That old out of time classic from the topographical oceans album. Did Rick eat another vindaloo? Probably not, but this track remains an implausibly thrilling thing in places.

Another new song? Well, why not. 'That, That Is' is almost as long as 'Revealing Science Of God', which is saying a lot. Still, lovely ambient introduction with plenty of delicate and impressive Steve Howe acoustic work. While i'm waiting for something to happen though, i'm selling my top goal-scorer in football manager 2007 because even though i'm Liverpool, i'm a bit of a spendthrift and i'm broke. Oh, drums and chanting arrive four minutes in. Hey, good drums! Pound away my man, pound away. Bam, bam, bam. What is this chanting though? Makes 'Topographical Oceans' appear sensible. Hey, groovy Chris Squire bass guitar. This is a lovely little Yes moment. Oh god, Jon is singing nonsense again. Hang on..... back to Football Manager 2007 again for a moment. I'll be back to Yes when something else happens. Well, something unfortunate has happened. I'm speaking a few seconds later now, you understand. Where's Eddie Offord when you need him, this mix is a mess. Very mushy and compressed. I want to hear every detail, dammit. Where's my copy of 'Relayer'? Nearly nine minutes into the track now. Is Rick asleep at his keyboards? Oh, here's a brief Rick flourish. Nice moment twelve minutes in too as the song briefly threatens to not be boring. More drums, more minutes. An almost exciting rock instrumental section, but it appears utterly divorced from the rest of the track when it arrives some seventeen minutes in. We know you guys can still play, but can you still write songs? Dick Kuyt has now been sold. It appears Yes have forgotten how to write songs 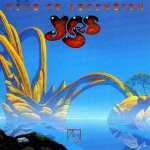