Staff member
Whereas the early-to-mid 90s yielded a plethora of solo female singer-songwriters, it was indeed a challenge to set apart just who was the alt-rock “queenpin” – TORI AMOS, FIONA APPLE, SHERYL CROW, ALANIS MORISSETTE, whoever? The grunge scene had now lost its way when the movement yielded its impetus in the wake of Kurt Cobain’s death in April ‘94, and North America was in need of FM-friendly artists that neither fitted within the realms of the bequeathed HOLE (Courtney Love’s connective alt-rock stop) or the growling grrrl genre. Canada’s widescreen “lady grinning soul” ALANIS MORISSETTE was just pop-perfect to finally prescribe and administer her “Jagged Little Pill” by summer ‘95. She never looked back.

Born June 1, 1974, Ottawa, Ontario, to a French-Canadian father and Hungarian mother, both schoolteachers, she began writing songs at age 10 and subsequently became a regular on the American cable show, You Can’t Do That On Television. Her debut self-financed single, `Fate Stay With Me’, was released in Canada in ’87 and, by the age of 17, the budding singer/songwriter had cut two undistinguished disco/pop albums for M.C.A.: the eponymous ALANIS (1991) {*4} and NOW IS THE TIME (1992) {*4}.

Alanis subsequently vacated her native Canada for the lure of Los Angeles, desperately hawking her demo around almost every major record company, helped by seasoned producer/engineer/musician/co-songwriter Glen Ballard. Adding a few tweaks here and there, salvation came in the form of MADONNA, who recognised her talent. The in-vogue Maddy immediately signed Alanis to her fledgling Maverick imprint.

Bolstered by health sales from the modern rock chart entries, `You Oughta Know’ and `Hand In My Pocket’ (both Top 30 hits in Britain), JAGGED LITTLE PILL (1995) {*9} steadily climbed to the top spot by the year end, subsequently scooping four Grammys and a Brit Award early the following year. Confrontational and uncompromising as well as evocative and emotional, MORISSETTE’s singing demanded attention, her pent-up adolescent angst finding an outlet in the likes of `Perfect’, the aforementioned UK singles, and belated Stateside successes through `Ironic’ and `You Learn’. Musically, the album was largely straight-ahead alt-rock, solid, if not exactly hard-edged, with Alanis playing guitar while backed up by organist Benmont Tench (ex-TOM PETTY), bassist Lance Morrison and drummer Matt Laug; guests Dave Navarro (guitar) and Flea (bass) also played their part. Touting a decidedly less earthy strain of “grrrl power” than Shirley Manson’s GARBAGE, Alanis’s album – also including UK Top 10 `Head Over Feet’ – kept up the momentum and fought off rivals of a similar career trajectory.

A taster single, `Thank U’, from her second No.1 album, became her biggest UK hit to date (US Top 20), reaching the Top 5. Yet with its convoluted title and meandering feel, the album in question, SUPPOSED FORMER INFATUATION JUNKIE (1998) {*7}, was never likely to spawn any further hits or indeed create the sensation of her debut despite its introspective subject matter: `Front Row’, `UR’, `So Pure’ and UK-only hit `Joining You’.

Even in the stripped down MTV UNPLUGGED (1999) {*5}, whereas MORISSETTE attempted to reintroduce the material in a more palatable form, her best songs so far (plus a cover of STING’s `King Of Pain’) retained an inscrutable edge. For completists everywhere, it was recorded on September 18, 1999, at the Brooklyn Academy of Music, New York.

By 2002’s UNDER RUG SWEPT {*7}, the singer had parted company with her long-time writing partner Ballard, resulting in a more cohesive and accessible, yet still relatively impenetrable set of songs. Bolstered by the `Hands Clean’ hit, the chart-topping album was, musically at least, a fair attempt at revising her mid-90s heyday, with all the restless tension which fuelled that era hardly having dissipated in the interim. Playing to the collegiate and bed-sit type who’d spare time to adhere to the singer-songwriter’s every word or whim, several slow-burners that eventually caught the imagination were `So Unsexy’, `Precious Illusions’ and the folksy closing piece, `Utopia’.

The Top 5 SO-CALLED CHAOS (2004) {*7} showcased a much-mellower MORISSETTE, aglow with the thrill of romance (specifically, actor Ryan Reynolds) and reflecting on the realities of the big 3-0. A full journal into her past relationships and foibles, but said with a touch of sardonic wit and humour, Alanis unburdened herself on `Eight Easy Steps’, `This Grudge’, `Spineless’, `Knees Of My Bees’ and `Everything’, and laid to rest her demons in one fell swoop.

Alanis even carried this older and wiser attitude over to a wholesale bare-bones re-recording of her 1995 debut, marking the 10th anniversary of its original release by way of JAGGED LITTLE PILL ACOUSTIC (2005) {*6}. The idea was said to be conceived a few years back while performing `You Oughta Know’ at a benefit gig in comic actor Larry David’s home in an episode of TV’s hard-biting Curb Your Enthusiasm. It was aimed directly at the Starbucks shops. However, many would duly point out her “MTV Unplugged” concert instead. Her last exclusive piece for some time, was her rendition of SEAL’s `Crazy’, a modest hit that turned up on “The Collection” (2005), an obvious choice of name for any compilation.

Another telling time for Alanis as her engagement to Reynolds dissolved, there was plenty subject matter on the breakup record, FLAVORS OF ENTANGLEMENT (2008) {*6}. Cryptically confessional and cathartic, and peppered with emotion and healthy angst, there was a certain degree of brooding insular tracks; three of them thought worthy of singles dispatch (`Underneath’, `In Praise Of The Vulnerable Man’ and `Not As We’), but none of them big hitters. A parental guidance warning on the slightly explicit `Straitjacket’, the claustrophobic moods and hazy metaphors pinned this down to a relationship rollercoaster ride of a set; best exampled on `Torch’ and `Giggling Again For No Reason’.

Upwards and onwards, MORISSETTE duly found a new love in Mario “MC Souleye” Treadway, and it was with this rapper she wed and gave birth to her first child, Ever Imre. Maintaining her Top 10 status by way of HAVOC AND BRIGHT LIGHTS (2012) {*5} – another produced by Guy Sigsworth (this time augmented by Joe Chiccarelli) – the singer-songwriter explored fresh avenues, although all linked back to matters of the heart. Focusing on hope and what her future might behold, there was urgency in tracks such as `Guardian’ (the opening salvo), `Woman Down’, `Lens’ and `Receive’. 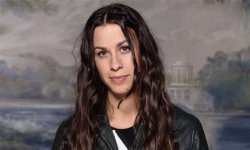