Staff member
There were none of the overblown theatrics of one such as Peter Gabriel to draw the headlines in the music press, none of the bombastic antics such as those of acts like ELP and, in purely musical matters, the sheer boldness of Yes or King Crimson was largely absent from their approach. This is not to say that Camel were not a full-on progressive rock band, it's just that their particular charms are rather less obvious than those of the aforementioned giants of the scene.

Andrew Latimer is undoubtedly the first person that most people associate with Camel, and his fluent melodic guitar style is certainly the most characteristic element in their music. Latimer is in great form throughout this live album. He has never been lauded for his vocal prowess but his understated delivery suits the subtle Canterbury influenced sounds of Camel perfectly. Keyboardist Peter Bardens is also in fine fettle and the criminally underrated Andy Ward is at the heart of everything the band deliver, driving them along with his inventive drum rhythms.

The performances on here are lifted from three different tours and the first part of the album is taken from the 'Rain Dances' tour of 1977. There is nothing wrong with the actual performances but Camel were arguably in decline during this period and the material does not hold up particularly well compared to their early work, perhaps with the exception of the opener 'First Light'. Things improve greatly when we move on to the second set of material which is taken from the 'Mirage' tour of 1974. Some of the renditions easily match their studio counterparts and, while not straying much at all from their original formats, there is a slightly rawer and more energetic aspect which suits some of the heavier sections very well.

Without a shadow of a doubt the real gem of this live set is an expert rendition of the classic 'Snow Goose' recorded in 1975 alongside the London Symphony Orchestra and featuring the full original line-up. The addition of the orchestra really adds a whole new dimension to the performance and rounds out the sound tremendously. The keyboard textures of Peter Bardens feel distinctly edgier and more aggressive than on their studio recordings and the sections of flute backed by strings sound absolutely wonderful, as do the mournful woodwind timbres. As is the case throughout most of the album Latimer's approach is slightly more aggressive with a more biting tone than he usually employs and this balances perfectly with the mellow edge infused by the symphony orchestra.

This album would make a great starting point for anyone who wishes to listen to Camel for the first time. The production is warm and clear, especially during 'The Snow Goose', and, apart from the rather underwhelming first section of material taken from their later works, serves as a great representation of their classic early period. Just make sure you listen to Disc 2 first. 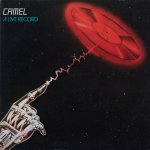