Caravan - In the Land of Grey and Pink

Staff member
Caravan was formed in 1968 and after a self-titled debut they signed up with Decca Records. "In the Land of Grey and Pink", released in 1971, was their second album with that label and it made them relatively famous within the Progressive Rock scene. It never became a hit, but had never gone out of catalogue either and continues to sell today, 30 years after its release it has already sold over 100,000 times - and there's still a loyal fanbase that call it not only Caravan's best effort, but the peak of the whole Canterbury Scene.

Musically the emphasis lies on David Sinclair's keyboards and organs, not really surprising because on a technical level he is simply the best of Caravan's musicians. The rhythm section of Richard Coughlan on drums and Richard Sinclair on bass does solid work, and though they are never really outstanding, the tight rhythm schemes are what make the songs work in the first place. Quite unusual for that time and genre, guitars are never in the foreground, Pye Hasting concentrates more on the singing than on his instrument - not a loss in any way because his beautiful vocals add a lot to the music. There are some other instruments used as well, like Saxophone, Flute and Horn - most of them played by Pye Hasting’s brother Jimmy Hasting. All these parts complement one another and form a world, in which the listener can lose himself and is able to let the music float by, without needing to strongly focus on it.
This music is definitely Progressive Rock and will therefore displease those who don't like that genre, calling it boring or pretentious. But there's a chance that it might even win favor with some who don't like the kinds of Yes or ELP. Caravan's music has a more down-to-earth approach than most Progressive Rock bands, and while it's far more complex than the usual rock album, it is also not nearly as overly complicated as many of those 70's Progressive bands.

Most songs offer catchy melodies, and there are even two really poppy tracks: the opener Golf Girl and the single Love to Love You (And Tonight Pigs Will Fly). Both are radio-friendly tunes, but still not to be reduced to the same level as most radio stuff. Golf Girl features a nice horn intro, some enjoyable flute work at the end an about the most hilarious lyrics imaginable: "And later on the golf course / After drinking tea / It started raining golf balls / She protected me". And Love to Love You, Pye Hasting's only composition (all other songs on the first half of the album are written by Richard Sinclair), has one of the easiest accessible and most natural sounding 7/4 riffs I’ve ever heard, a potential radio hit that could have brought Caravan to fame, if they had been lucky. Both songs always make me smile, no matter in which constitution I am.
The dreamlike Winter Wine, dealing with all kind of fairytale themes, must be one of Caravan's best songs. It's more calm and seems to floats slowly, though the rhythm section is still constantly applying pressure. Really outstanding are Pye Hasting's clear and beautiful vocal performance and the organ solo in the middle of the song.
The title track combines the mellower feeling of Winter Wine with Caravan's poppy side, the outcome is another great track. Noteworthy are the babbling vocals towards the end and the beautiful piano solo, one of my favorite piano parts ever.

But an album with a side-long song stands and falls with that track, and Nine Feet Underground is not what it promises to be. Within the band, the song was referred to as "David’s thing" and it is pretty clear why: the several parts into which the song is divided (with absolutely crazy titles like Hold Grandad by the Nose) serve not so much as songs but rather as basic patterns to David Sinclair's extended soloing. On 22 minutes of music you would expect some kind of build-up, but Nine Feet Underground features nothing like that, it's one Sinclair solo, then another Sinclair solo over different rhythm work, then another one and so on. The music is not bad, the intro and most of the solos are great, and the second one of the two vocal parts is one of the best moments in the whole album but in general the song offers not enough to justify its length. The whole thing culminates in a guitar/bass/organ ripoff of Cream’s Sunshine of Your Love-riff. It’s not a bad ending, but the similarity (or better analogousness) to Cream’s most famous song makes it hard to concentrate on the music, I always expect Eric Clapton to start singing during those last minutes of the album.

The remastered version I own features five more tracks, three of them are different versions of the original songs, but two are real songs that are previously unreleased because they didn’t fit on the original release: a more mediocre Aristocracy, that was partially released on “Waterloo Lily” and the beautiful love song I Don’t Know Its Name (Alias the Word), that is on the same level as the first half of "In the Land of Grey and Pink". 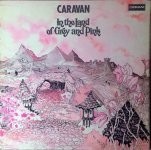