Staff member
Despite strong sales and a decent critical reaction for 1992 album ‘Adrenalize’, English quintet Def Leppard could see the writing on the wall following that release. Their previous metal/hard-rock sound had taken a left turn towards popsville, a switch in direction that appeared to be an incorrect one as grunge and alt-rock bands began to gain mainstream appeal and acclaim at the beginning of the 90s. It was time to attempt to foresee the future and serve up something different… And so we have Def Leppard’s sixth full-length release; ‘Slang’.

Unfortunately, instead of choosing a direction and going with it, the veteran Sheffield outfit (alongside new co-producer Pete Woodroffe) decide to throw absolutely everything at the wall to see what sticks. That can be seen in the first three tracks alone, as ‘Truth’ shows industrial leanings, ‘Turn To Dust’ heavily uses an Indian Sarangi, while the horrendous title track (which was amazingly chosen as lead single) is the band’s stab at nu-metal. In a sense, some of the fortune telling was spot on, since industrial and nu-metal were to gather momentum as the decade progressed. However, the delivery was anything but spot on, as these areas were simply not Def Leppard’s specialties.

Thankfully, ‘Slang’ contains a solid and workmanlike mid-album quartet of tracks which make the album passable. 3rd single ‘All I Want Is Everything’ is a mid-tempo radio-friendly cut that is well-performed and contains lyrics that will hit home for some. Meanwhile, 2nd single ‘Work It Out’ is a darker subdued piece which probably best exemplifies what Def Leppard were aiming for on this album. Most notable on this song is the fact that Rick Allen has reverted back to more of an acoustic-sounding drum-kit, as opposed to the very electronic sounding drums of the previous two albums.

The album highlight is 4th single ‘Breathe A Sigh’. Initially a super slow ballad, this builds up momentum well and diverts away from the power-ballad style of the bands past. Instead, it chooses sparse instrumentation and terrific vocal harmonies to make it a resounding success. The following ‘Deliver Me’ is then a strange cut that isn’t totally convincing, but effectively uses the varying vocal styles of Joe Elliott to good effect.

While the final four tracks deliver a vast array of this, that and the other which could separately appeal to some listeners (for instance, ‘Gift Of Flesh’ is the heaviest piece here), the strength and quality of the songs themselves are mediocre at best. That may be a little harsh on atmospheric ballad ‘Blood Runs Cold’, but the bottom line is that this album simply doesn’t hold interest to the very end. This is especially the case for the bland and arguably downright bad final duo which take up over ten minutes of time.

As the phrase suggests, there is often a fine line between being brave and foolish. On ‘Slang’, Def Leppard may have indeed crossed that line as, in progressing outside of their comfort zone, their limitations have become a little too apparent. Things are not helped by the fact that the band has taken an unfocused approach in crafting their new sound, resulting in a hit and miss affair that is predominantly devoid of quality hooks. Ultimately, ‘Slang’ may be a passable release (if only just), but it leaves Def Leppard’s future very much up in the air.

4. All I Want is Everything

10. Where Does Love Go When it Dies 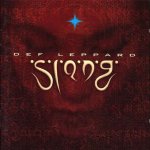