Staff member
X is one of the most polarizing entries in Def Leppard's Catalogue. It seems that fans either love this record or hate this record, and I believe that both sides have valid points. However, I am part of the admittedly small group of people who see this record in a positive way, and here's why; It contains some great songs, and some even better performances.

That isn't to say that this whole record is "cream of the crop". There are some straight pop tracks here that feel insincere, and kind of creepy coming not only from grown men, but from grown men who are looking at the far side of their 40's. The worst of these is the track "Gravity". The heavily programmed rhythm tracks give the verses a slightly dancey feel, and the lyrics could have been written by any boy-bander. As a matter of fact, it would have gone over much better if NSync or the Backstreet Boys had recorded it. "Unbelieveable" is another of these tracks, although it is much less offensive than "Gravity". The problem with "Unbelieveable" is that its a sign of Leppard chasing an audience, rather than making the music it wants to make. This is what enfuriates many of the fans about this record.

Lucky for us, however, there are quite a few great rock songs on the album, and quite a few sonic experiments that actually work. The acoustic guitar, gurgling synths, and modern rock-minor key trappings of "Now" help to slightly update Leppard without making them sound out of place on their own record. "You're So Beautiful" is a great pop-rocker that shows off the vocal power of the band, as well as their writing and playing abilities (which I believe are quite under-rated). In the middle of the record comes what I believe to be the Crown Jewel. After the stately, adult-contemporary leanings of "Long Long Way to Go", is a fast, fun ball-buster called "Four Letter Word". The main riff is bluesy and instantly memorable. The lead vocal is loose and cock-sure, which is always where Joe Elliot does his best work. If the world was perfect, this would have been Leppard's career re-energizing hit. Out of all the tracks on the album, "Four Letter Word" is the definite winner.

There are quite a few other songs that make this album and enjoyable listen. It is not one of Leppard's classics, but I also don't think it deserves as much of a bad rap as it has. I encourage fans of Leppard, and fans of pop-rock to give it a try. 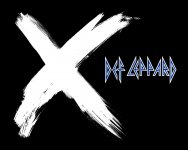