Staff member
So it should come as a surprise to no one the best album of their sorry musical career should be an album of covers. Yes friends and neighbors, DL finally got some sense and decided to try to record some good music. And if you don't have any of your own just go begging for others, amirite? Which is what these sugary soccer rockers decided to do for this album here. YEAH! it's called. Yup. Title blows. But what's inside is pretty damned good.

Well good thing they know how to play their instruments or they most likely would of messed this up too. But lucky for us DL are old pros at this stage of the game and they are ready to rip off some......um, cover some tunes. A whole albums worth! How nice of them. Not an original in sight. Again, very nice of them.

The lads kick things off with an ok cover of T-Rex's "20th Century Boy" and it really isnt anything too exciting. Yet they manage to infuse it with some bombast that actually works to freshen this track up. So they earn brownie points for not treating it with kit gloves. Next they decide to update the old David Essex song "Rock On". This is more interesting as they infuse this tired old AM radio standard with a menacing stomp I haven't heard from this band in, um, forever. Ever. And good thing for us someone in the band has a good ear, because up next is a great cover of Blondie's "Hangin' On The Telephone". OMG it's DL stripped down and actually swingin'! Just like a real rock n roll band. These guys are pretty good when they get to pretend. And they rip this track to shreds.

From here on DL take us through a journey of some well known and not so well known songs of some of their favorite artist. And it makes you wonder if this is the music they love most why didn't any of this good stuff influence them in their own career . We get a hell raising version of Sweet's rowdy rocker "Hell Raiser" with the boys wound up tight and One Arm drumming like he has two, a surprisingly effective and heartfelt rendition of the old Kinks classic "Waterloo Sunset" that finds singer Joe Elliot showing some vocal flexibilty and adding just the right amount of melancholy, and a rough and tumble take on the Faces/Rod Stewart standard "Stay With Me". The old geezers raunch it up good on this track and you can almost feel the sleaze drip from it. In fact if you told me it was the Faces covering themselves I would almost believe it. If you told me it was a crap band like DL I would think it was April Fools Day. But it is DL. So the proof is in the pudding and I'm giving credit where it's due. This shi...rocks.

Not everything is peaches and cream here, though. We get a cheesy version of David Bowie's "Drive-In Saturday Night" which is listless, dull, and overcooked from the start with it's mid-tempo thud and ornate orchestral arrangments, a stinker of a stick in the mudd called "A Little Bit Of Love" (don't know who this is originally by) that sounds like generic ROCK band A, B, and C, (or Def Leppard, for instance), and a not so groovy mess called "Street Life" originally done by Roxy Music. It's just plain meh. But those little niggles are easily offset by the goodness here. Such as adventerous selections like the lush and atmospheric ELO cover "10538 Overture", which retains some of the Beatles influence of the original, a kick arse version of Mott The Hoople's "The Golden Age Of Rock n Roll" that is so un-DL like it can't help but be good as it swings like good rock n roll should, and a fun cover of John Kongo's obscure little ditty "He's Gonna Step On You Again". Heavy riffage, feedback, and some nice twang. 'Nuff said.

Ok. So what have we learned today? We've learned even sucky bands are pretty good if they understand the music of others, can play their instruments, and put some balls into it. What took these old whores so long, I dunno? But WTF, better late than never. With YEAH! Def Leppard have pulled off the seemingly impossible. They made an album that people who love DL will like and people who hate DL will like in equal fashion. No small feat for a suckass band.

3. Hanging on the Telephone

10. The Golden Age of Rock and Roll 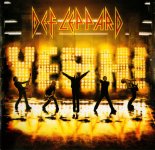 One of the best albums of all time. Every song is hit-level.

I so agree.
I detest Def Leppard, but for "20th Century Boy" alone, I like this album.
FACTOID: When SLADE played an 80's rock festival (Monsters Of Rock @ Castle Donigton, I think?),
DEF LEPPARD insisted in being above SLADE on the billing.
This meant that JOE ELLIOTT'S retards came on stage to be greeted with booing & objects hurled at them.
Serves the upstarts right.
Show hidden low quality content
Share:
Facebook Twitter Reddit Pinterest Tumblr WhatsApp Email Share Link
Forum Community