Staff member
Long before singer-songwriter and lead guitarist Mark Knopfler was a rootsy solo artist and soundtrack specialist, he’d led DIRE STRAITS from pub-rock nobodies in the mid 70s to global arena-rock superstars, culminating with their legendary Live Aid set in ‘85. Complete with his John McEnroe-type bandana, made-for-MTV videos and DIRE STRAITS’ multi-platinum “Brothers In Arms” CD, Knopfler and Co cultivated the yuppie 80s in a way only the likes of American equivalent BRUCE SPRINGSTEEN could emulate.

Formed in Deptford, London in mid 1977 by the aforementioned Scots-born ex-teacher and journalist Knopfler, he surrounded himself with likeminded roots musos, namely his brother David (on rhythm guitar), bassist John Illsley and former folk drummer Pick Withers. After Radio One DJ Charlie Gillett gave their demo an airing later the same year, the quartet were duly signed to Vertigo Records by A&R man John Stainze. Produced by Muff Winwood in the midst of a new wave frenzy, the eponymous DIRE STRAITS (1978) {*8} proved to be a bit of a slow burner, even their cool and breezy debut single, `Sultans Of Swing’, was finding it hard to draw in the necessary punters. A driving but subtle slice of rootsy, bluesy R&B, the semi-autobiographical track was a wonderfully observed snapshot of the Leeds and London pub rock scene where they’d initially plied their trade. Although it failed to chart first time around, heavy cross-Atlantic airplay in early ’79 boosted sales of the set and secured a deserved place for both single and album in the American and British Top 10. Comparisons with BOB DYLAN’s easier going material and the laidback (horizontal, even!) country-blues grooves of J.J. CALE (or CLAPTON) were the favoured choice of salivating critics, although Mark’s dry wit and unmistakable guitar lines gave DIRE STRAITS the stamp of authenticity. `Water Of Love’, `Down To The Waterline’ and the funky `Wild West End’ might’ve followed the classic cut into the charts, but it was time to move on.

BOB DYLAN was so impressed by the album, it prompted the man to send an invitation to Mark and Pick to augment him on his 1979 set, “Slow Train Coming”, while the record’s producers Barry Beckett and Jerry Wexler worked on DIRE STRAITS’ Top 10 follow-up, COMMUNIQUE (1979) {*5}. The LP further developed Knopfler’s narrative skills, although only opener `Once Upon A Time In The West’ and minor hit `Lady Writer’ retained any fluidity of their previous effort.
With Hal Lindes replacing the departing brother DAVID KNOPFLER (who wanted to assert himself as a solo artist) and ex-E Street Band man, Roy Bittan drafted in on keyboards, MAKING MOVIES (1980) {*7} took a harder-edged yet more melodic, accessible and expansive approach; vivid story-songs such as the bittersweet `Romeo And Juliet’ saw Mark Knopfler compared to SPRINGSTEEN, while the heady momentum of lengthy opening salvo, `Tunnel Of Love’ (interpolating “The Carousel Waltz”), effortlessly conjured up the giddy thrills and spills of a trip to the fairground.

Launched by another compelling narrative in `Telegraph Road’ (clocking in at over 14 minutes!) and boasting the moody and melancholic `Private Investigations’, LOVE OVER GOLD (1982) {*7} became DIRE STRAITS’ first UK chart-topper; the band – now a 5-piece with keyboard player Alan Clark – flying in the face of fashion and selling millions, although the album only comprised five tracks.

A little more in substance and coming on the back of KNOPFLER’s inaugural excursion into production work (on DYLAN’s “Infidels”) and movie scores via “Local Hero”, the lengthy concert double-CD, ALCHEMY – DIRE STRAITS LIVE (1984) {*7} proved the quintet could hack it on the live front. Former pub-rock and MAN drummer Terry Williams was the band’s newest recruit, as they almost breezed through every majestic track. Although there was no room for the group’s most recent R&R hit, `Twisting By The Pool’, MK’s solo celluloid cut, `Going Home’ (from the aforementioned Bill Forsyth flick) was a decent enough closing piece.
Just as DIRE STRAITS were to propel themselves in front of millions at Live Aid, the slick and chunky BROTHERS IN ARMS (1985) {*8} took the world by storm. The album’s glossy production and more focused pop-friendly approach saw it breaking UK sales records. Its biggest hit, although somewhat edited, `Money For Nothing’, featured STING – as in the Live Aid concert – was an acerbic comment on MTV domination; the accompanying video ironically caned by the channel in all its innovative, technology-enhanced glory. It was also the closest DIRE STRAITS ever veered towards hard-rock, the bulk of the material going in for coffee table, ear-massaging atmospherics and acoustic textures. The soft-focus minimalism of the title track is arguably DIRE STRAITS’ finest moment and, despite the stigma surrounding the album, it remains an essential 80s release. Hit after hit just rolled off the production line, `So Far Away’, the irritatingly catchy rock’n’roller `Walk Of Life’ and the misty jazz cue `Your Latest Trick’ (KNOPFLER had earlier penned `Private Dancer’ for TINA TURNER), setting out the band’s claim to the world’s top act.

Following the attendant mammoth touring commitments, DIRE STRAITS/Knopfler took an extended sabbatical with only a 1988 best of to keep fans happy. Having added scores for “Comfort And Joy” (1984) and “Cal” (1984) to his soundtrack CV, KNOPFLER was commissioned for both “The Princess Bride” (1987) and “Last Exit To Brooklyn” (1989); he also produced/co-produced AZTEC CAMERA’s “Knife” (1984) and RANDY NEWMAN’s “Land Of Dreams” (1988) respectively. Mark also got back to his pub-rock roots with The NOTTING HILLBILLIES (a quartet of friends), who releasing one album, `Missing… Presumed Having A Good Time’ (1990). Later that year, KNOPFLER hooked up with country picker CHET ATKINS for the `Neck And Neck’ album.

DIRE STRAITS eventually returned in 1991 with ON EVERY STREET {*5}, an album which couldn’t hope to emulate its long-gone predecessor, and in a way, didn’t even try. It reached No.1 all the same and sold enough to keep their record company happy in the meantime. Led by one of four roots-driven hits, `Calling Elvis’ was head and shoulders above minor chart entries such as `Heavy Fuel’, `The Bug’ and the title track. An additional touring band of Danny Cummings (percussion), Phil Palmer (guitar), Paul Franklin (pedal steel), Chris White (sax/flute) and Chris Whitten (drums) augmented DIRE STRAITS’ live swansong, ON THE NIGHT (1993) {*4}, but basically they were a spent force at this time, the albatross around their neck being their 1985 magnum opus. MARK KNOPFLER continued on his quest to deliver a fantastic solo album, while film work seemed to freeze after his “A Shot At Glory” in 2001. 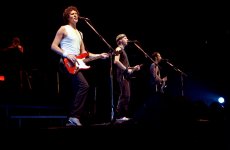