Formation: Fleetwood Mac formed in London when founder Peter Green, drummer Mick Fleetwood and bassist John McVie were in a band with John Mayall called ‘John Mayall & the Bluesbreakers’. ‘Fleetwood Mac’ as a band name came about when Green wanted Fleetwood to start a band with him and McVie, though McVie was initially reluctant due to not wanting to take a big career risk. They instead enlisted slide player Jeremy Spencer and bassist Bob Brunning into the band. They played a show at the Windsor Jazz and Blues Festival and McVie subsequently replaced Brunning.

Musical Career: Fleetwood Mac’s debut album ‘Peter Green’s Fleetwood Mac’ came out in 1968 on the label Blue Horizon. It was a blues collection and reached number 4 on UK charts but did have any singles. Their first charting singles were ‘Black Magic Woman’ and ‘Need Your Love So Bad’. In 1968, they released second album ‘Mr. Wonderful’ featuring Christine Perfect on keyboards. They later added guitarist Danny Kirwan to their line-up and released UK number 1 single ‘Albatross’ and the album ‘English Rose’. 1969 marked their last blues recordings when they moved to Immediate Records. On their new label, they released ‘Man of the World’ which peaked at number 2 in the UK. They changed label again when their manager Clifford Davis chose to sign them with Warner Bros.’ Reprise Records on which their first album was rock-infused ‘Then Play On’. Peter Green was suffering from his drug use and left the band in 1970 after a disagreement with the others when they refused to give all their money to charity at his suggestion. 1970 saw them release ‘Kiln House’ on which McVie’s wife Christine Perfect contributed and was soon asked to join. Spencer disappeared suddenly in 1971 during a tour and the rest of the band later found that he had joined a cult called the Children of God. They persuaded Green to come back to help finish the tour. His return was not permanent, however, and they soon hired Bob Welch as a guitarist under a recommendation from a friend. With Welch they released the hugely different ‘Future Games’ and the subsequent 1972 album ‘Bare Trees’. Kirwan was then fired due to his alcohol dependency which caused him to be difficult at live shows, at one point refusing to go on stage criticising his bandmates. After that, the line-up was regularly changed. They added guitarist Bob Weston and vocalist Dave Walker but Walker was fired after their ‘Penguin’ album tour in 1973 and Weston was fired for having an affair with Fleetwood’s wife. Clifford Davis made rock history in a strange turn of events where he claimed he owned the band name and set up a fake Fleetwood Mac band with members who had never been in the real band. People were told that Welch and McVie had quit and that Fleetwood and Christine were soon to be joining.

The band went through a struggle with their Warner Bros. label as they attempted to convince them of the real Fleetwood Mac line-up. They then decided to manage themselves. They released ‘Heroes Are Hard to Find’ in 1974, though Welch left soon after the tour. Welch was replaced by Lindsey Buckingham who also had his girlfriend Stephanie Nicks join the band. Their first album with the band was the 1975 self-titled record which reached number one in the US and sold 5 million copies. With 1976 came the break up of John and Christine McVie, Buckingham and Nicks and Fleetwood and his wife Jenny. However, in 1977 they released ‘Rumours’ which won a Grammy Award for Album of the Year. The band went on a hiatus after 1982’s ‘Mirage’ album during which many members took up solo projects, Fleetwood had filed for bankruptcy and Nicks sought therapy for drug and alcohol addiction problems. Lindsey Buckingham left in 1987 and guitarists Billy Burnette and Rick Vito were added. The new line-ups first release was UK number one ‘Behind the Mask’. In 1991, Nicks and Rick Vito both left the band but Nicks rejoined with Buckingham for U.S. President Bill Clinton’s Inaugural Ball in 1993. Mick Fleetwood, John McVie, Christine McVie and Stevie Nicks reunited in 1997 and released live album ‘The Dance’. In 1998, Fleetwood Mac were inducted into the Rock and Roll Hall of Fame and also won a BRIT award. However, Christine McVie left permanently that year. In 2008, there were reports that Sheryl Crow would join the band but this was later denied. They went on a world tour in 2009 which served as their first non-album tour and it grossed $71.2 million. In 2009, a one-hour documentary called ‘Fleetwood Mac: Don’t Stop’ was broadcast in the UK on BBC One featuring interviews with the current band members. In 2011, Stevie Nicks announced another tour in 2012 as well as a new album, but, in 2012, Mick Fleetwood said he doubted it due to Nicks and Buckingham’s solo work. However, Nicks confirmed that they would tour again in 2013. Since their last tour, there has been much tragedy surrounding the band. Former bassist Bob Brunning died in 2011, while former guitarist Bob Weston soon followed in 2012. Former singer and guitarist Bob Welch was also found dead in 2012 after shooting himself. 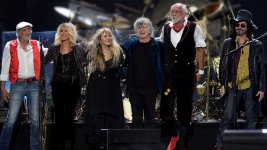