Staff member
Experimental synth pop, if you can believe for a second that anything like that could possibly exist. And it's really really good! After the commercial success of both Duke and Collins' solo debut Face Value, one might think that the band would have chosen to simply rest on their laurels and begin churning out clones of those albums. Fortunately, neither of those turned out to be true - the band seemingly took it upon itself to become a sort of Godfather to the rest of the synth pop world, looking for new ideas that would possibly make this genre worthwhile in the long run, and as for the second one, Collins still had enough discipline within him to keep his solo style from seeping in and infesting the group's work. The material is filled with synthesizers, drum machines and sequencers, but they are used in a far more interesting and novel manner than one might find in other albums of the day.

Most importantly, though, a LOT of these melodies are ridiculously enjoyable. They're far more hook-filled and energetic than most of the songs on Duke, which I enjoy but also can be a bit too lethargic at times. This, of course, prompts a question - where the heck was the group hiding all of these melodies the past few years? Well, your thoughts may vary, but my opinion is that in the last few albums, the band had had some difficulty coming to terms with the fact that their status as progressive rock heroes was a thing of the past. Abacab is, arguably, the first album that wipes away nearly ALL of the bad Wind influences - Duke may have been a sizable jump in its own right, but the songs bore several resemblences to Three, which in turn held on to some Wind traits.

And lookie here! The lyrics have been "simplified," but they've also gotten rid of the boring cliches that plagued the band the last few years, while still retaining a fair amount of intelligence. Meanwhile, some of the songs are reasonably lengthy, with some jamming here and there, but even in that context, the band has discovered a new identity for itself - even the lengthy Dodo/Lurker, arguably a full-blown progressive suite, bares little resemblance to the previous progressive pieces of the group.

The material of the album can generally be divided into two parts - the lengthier, more artsy pieces, and shorter and more "normal" songs. The title track is probably the best of all of these, and in my mind possibly the finest synth pop number ever written (yes, I'm aware that making such statements is probably irresponsible, but who's gonna stop me? Huh? Huh?). The main melody and chorus are incredibly catchy, the cool 80's robotic synths help rather than hinder, and the last three minutes are a cool robotic groove! On first listen, one might scoff at it a bit, wondering why the band would bother recording such a "pathetic jam," especially when it's propelled by drum sequencers, but Mike's guitar does a fabulous job of working with the synths, creating a memorable experience all the way to the ending fadeout.

The other two artsy pieces are good as well. Banks' solo composition Me and Sarah Jane doesn't enthrall me as much as it probably should, but some of the melodies are fairly interesting (and I really like the "round round round"/"down down down" part), not to mention it's neat the way it has a false fade-out so early in the song. Plus, the last couple of minutes are very pretty when they're on, so yeah, it's a good song. Not as good as Dodo/Lurker, though. Oh sure, it might seem a bit disconcerting to hear such cheezy synths playing an ominous pair of chords to kick things off, but strangely enough, they help add to the charm of the piece as a whole. Meanwhile, the various melodies are memorable as hell, the synth-and-drum-machine groove is tons of fun to listen to, the lyrics are hilariously intriguing, and Phil puts in one of the best vocal performances he ever would muster up on a Genesis album, contorting his voice into all sorts of characterizations throughout. He even raps in Lurker, for crying out loud! Of course, my brother hates Lurker for that very reason (he calls it the most pathetic example of rapping he's ever heard in his life), but whatever.

As for the more "normal" material, none of it fascinates me quite as much as does Dodo, but much of it is quite good regardless. No Reply at All may strike one on first listen as extraordinarily clumsy, thanks to the horns (real horns, not synth-horns) and the awkward melody in the opening line, but further listens reveal it to be very enjoyable regardless. It has a very, very engaging song structure, the melodies turn out to be memorable after all, and the ending lengthy "There's no reply at all - is anybody listening" fadeout is a blast. Keep it Dark may also strike one as very awkward initially (though it becomes very cool eventually), but that's merely because it's deceptively complex, switching between time signatures aggressively throughout. Plus, Phil's vocals sound weirdly distorted in places, the result of Banks layering his synths in a slightly unconventional manner.

The last four tracks, alas, let down the album just a whee bit. Not a LOT, but just enough to move it out of borderline-B territory. Who Dunnit?, for instance, is a silly little proto-techno groove with Phil singing stupid lyrics like "Was it you or was it me? Or was it he or she" and "I didn't do it I I didn't do it I" and especially the incessant "we know we know we know" chantings. The thing is, I actually enjoy the track while it's on (everybody needs some guilty pleasures in their lives) ... but I can very easily see where it would annoy most people. Likewise, I do gain some degree of enjoyment from Collins' Man on the Corner, as it is quite memorable, but like most solo Collins numbers, it's extremely lightweight and lacking anything truly substantial to latch onto.

Mike's Like it or Not also fails to thrill me - I do like the ascending guitar line that pops up frequently, but after several listens, that is the ONLY part of the song that I can remember. It tries hard to be one of his typically heavenly bombastic ballads, but the formula has at least temporarily run dry for Rutherford. Fortunately, the album doesn't end on a down note, instead resolving itself with the perfectly enjoyable Another Record. Banks switches to piano, finally, and it works surprisingly effectively with Collins' electronic percussion and Mike's subtle guitar calls. It's not exactly a masterpiece, as the melody isn't extremely memorable (except for the chorus), but since that chorus is repeated in the lengthy fadeout, it does a good job of leaving a good taste in your mouth.
So what do you know? Genesis loses its two most talented musicians, stagnates badly for a couple of years, and yet manages to re-emerge as leaders in a field totally different from where it found its initial glory. Now that is a sure sign of a really talented band. And this "Genesis mark-2" hadn't even hit its peak yet!

Track Listing:
Abacab
No Reply At All
Me And Sarah Jane
Keep It Dark
Dodo
Lurker
Who Dunnit?
Man On The Corner
Like It Or Not
Another Record 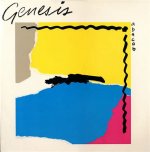