Staff member
Not much of an improvement on Wind, but an improvement in some ways nonetheless. Maybe I'm wrong, but I get the feeling that Steve's acrimonious departure sent a wakeup call to the band concerning the dead end they'd hit, because this album corrects at least some of the mistakes of before. The general style isn't that different; it's still centered around keyboards; the synth tones are just as monotonous and boring as before (and in some ways worse); even with Hackett gone there's not that much less guitar than on Wind (though it has much less personality than before); and the lyrics are still dumb and preachy in places. Also, there's nothing here that really comes close to the greatness of Blood on the Rooftops. BUT, there are no silly instrumentals, the songs show at least some sense of compactness (this apparently helped turn off a lot of fans to the album all by itself), more than a couple of the songs are truly memorable, none of the lyrics reach to the bile-vomit depths of One for the Vine (and some are actually fairly poetic and moving) and Phil is bothering to stick some emotion and depth into his voice on a consistent basis.

Don't get me wrong - the amount of filler is still larger than on any Genesis album to that point, barring Wind of course. The first five songs are a good chunk, and Follow You Follow Me is a fabulously catchy closer from start to finish (what an incredibly memorable chorus too!), but except for the cute Scenes from a Night's Dream (poor little Nemo is right), the other four songs don't really do much at all. Deep in the Motherlode is probably the best of the lot, as it's a somewhat interesting mix of okayish synth riffs and countryish guitar licks, but it's very overlong and wouldn't become interesting until Phil's singing got better. Many Too Many is a Banks ballad that borders waaaay too close to syruppy late-70's soft-pop in places, and it doesn't move me anywhere near as much as Undertow (mentioned below) does. Say it's Alright Joe is a country-ish ballad (except for all of the keyboard parts) from Mike that totally goes in one ear and out the other, and The Lady Lies is an overlong monster whose most notable feature is a throroughly mediocre synth and guitar riff in the chorus. It has some really great drumming, but it does little to help to overall effect: I can't shake the feeling that Phil listened to the track and thought, "Wow, this kinda sucks, I'm gonna have to do everything in my power to even make this vaguely passable." All told, then, that's about 20 minutes of material that does little to justify placement on the album (especially when the band had tracks like The Day the Light Went Out lying around), and the rating can't help but suffer because of it.

Fortunately, the first five tracks all range from above average to very good, so I can't give too low of a rating to the album. Banks' Undertow, for instance, is a far better composition than any of his crud on Wind - in particular, the "Let me live again" choral melody is positively gorgeous, and the lyrics are certainly some of the best Tony has ever given us. Special attention should also be given to Mike's pretty Snowbound, an ode to a snowman. Aside from the gorgeous acoustic melody, in the grand tradition of Ripples, it also contains Phil's best singing of the album, making lines such as "pray for the snowman" burrow deep within your soul and bring you sorrow for the snowman's fate.

The other three are good enough too. The opening Down and Out could be viewed as an inferior sequel to Eleventh Earl of Mar, but the tricky jazzy rhythms are interesting, the melody is fairly memorable, and Phil has more energy in his vocals in ten seconds of the song than in the whole ten minutes of Vine. After Undertow, then, is Ballad of Big, a bouncy country ditty with lots of cheezy synths but also an amusing riff for them. And finally, we have Tony's Firth of Fifth clone Burning Rope. Now, it couldn't possibly hope to match up with such a masterpiece, even if Mike uses the same guitar tone on the mid-song solo that Steve used five years earlier, but it's not bad. The lyrics mildly suck, of course, but the melody is memorable in spots, and the middle-jam is at least not extended long enough to get annoying. Overall, it's certainly good, even if it doesn't deserve to be over seven minutes long.

Actually, I can make a very similar statement about the album in general. If it wasn't over fifty minutes, especially when there's only about half an hour of good material on here (and only a little bit approaching greatness), I could even give it an 8 if I were feeling especially charitable. As is, though, the album's greatest strength is really that it's not Wind, and it's hard to give a high grade to an album like that. But it certainly is better than Wind - much of it's dull, sure, but given the choice between boring and pathetically awful, well, I'll take boring anyday.

Track Listing:
Down and Out
Undertow
Ballad Of Big
Snowbound
Burning Rope
Deep In The Motherlode
Many Too Many
Scenes From A Night's Dream
Say It's Alright Joe
The Lady Lies
Follow You, Follow Me 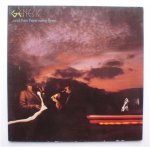