Staff member
Gomez are a five piece blues/rock band from England. Betraying their youthful age, they released the Mercury Prize winning album "Bring It On" in 1998. The album amazed listeners as it turned out old school blues/roots rock that was markedly different to the sound most Britpop artists like Travis, The Stereophonics and Coldplay were seeking. Unfortunately for the band, the "Mercury" would be a curse, for although they have produced critically acclaimed albums, each being quite different and a step forward, the band has yet to breakthrough commerically. Owning a very large and rabidly loyal fanbase (ask any Australian who Gomez are) and developing a very slick and arousing live performance, Gomez are still pushing forward in the attempt to move beyond being the next "Big Star". 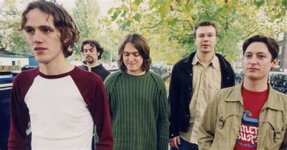