Staff member
Retro punk rock for young Americans (and retainer spiky-top Brits) who missed out on RAMONES, BUZZCOCKS, even The DICKIES, the triumphant trio of GREEN DAY have become a phenomenon around the globe. Somewhat akin to a third/fourth-generation punk revolution for the 90s, 00s…, without the danger, unpredictability and raw excitement, titles such as `Basket Case’, `Brain Stew’ and the political `American Idiot’ speak volumes for the masses weaved, hook line and sinker, into their web. Formulaic and annoyingly catchy, the multi-millions who’ve bought into their meld of post-70s punk, ensure that GREEN DAY retain their status as hardcore punk’s sole radio-friendly unit shifters.

Formed 1987 in Rodeo, near Berkeley in north California (initially as Sweet Children), schoolboys Billy Joe Armstrong (vocals and guitar), Mike Dirnt (bass) were duly joined by Al Sobrante (alias Isocracy sticksman John Kiffmeyer), as the new moniker of GREEN DAY filtered through on subsequent gigs; they were known to love the weed marijuana. Up and coming local indie imprint, Lookout! Records (run by Larry Livermore), gave the trio its first break as EP’s `1,000 Hours’ and `Slappy’ sold out their limited-editions. Recorded in under 24 hours, mini-vinyl-LP 39/SMOOTH (1990) {*4} was a blast in the right direction, while the demand for the group instigated a collective release for all their work up to date as 1,039/SMOOTHED OUT SLAPPY HOURS {*6} the following year. One anomaly of sorts was the release of a `Sweet Children’ EP, a 4-track set (including a rough take of The WHO’s `My Generation’) that was actually recorded for Skene Records at 6ft Under in Minneapolis in July 1990, and not in – as presumed by many pundits – in 1988 when Sweet Children was the trio’s name.

When Lookouts drummer Tre Cool duly filled the vacant spot left by college-bound John, KERPLUNK (1992) {*7} was a very different game indeed as the group outgrew their independent status. On the back of grunge-rock releases by NIRVANA (`Nevermind’) and PEARL JAM (`Ten’), the pop-punk of `2000 Light Years Away’, `Who Wrote Holden Caulfield?’ and the first version of `Welcome To Paradise’ seemed miles apart. Another listen to the record, unearthed some chunky vibes in `Christy Rd.’, `80’ and country-boy S&M via `Dominated Love Slave’; the CD added the aforementioned “Sweet Children” EP.
Snapped up by Reprise Records, GREEN DAY’s third album DOOKIE (1994) {*8} was a surprise to everybody but its college/MTV-biased fanbase; it also rose to No.2. Nationwide airplay and belated consummation overseas led to UK Top 30 hits for both the album and spawned singles, `Welcome To Paradise’ (a re-vamped version), `Basket Case’, `Longview’ and `When I Come Around’.

Although not as immediate as its predecessor, follow-up set INSOMNIAC (1995) {*7} kept the speedball rolling, pitching it faster, harsher and darker as Armstrong and his snide-y spikes of barb pushed the buttons once more. The toilet-pan humour of opener `Armatage Shanks’ to the anthemic RAMONES-esque `Stuck With Me’ (the second in a string of UK Top 30 hits dividing `Geek Stink Breath’ and double-header `Brain Stew’ / b/w `Jaded’), GREEN DAY were “fast” becoming heroes for the disenfranchised youth of the day. Pity then it had to compete with the hordes of equally faceless acts clogging up the charts with similar material; SCREECHING WEASEL were one such act, Dirnt filling in on bass on their 1994 set, `How to Make Enemies And Irritate People’. Meanwhile, Billie Joe was also an associate member of the PINHEAD GUNPOWDER project, who’ve released several albums, including mini-set `Jump Salty’ (also back in ’94).

Firing on all cylinders once again after a year spent with their families, fifth album NIMROD (1997) {*6} made sure the lads were still in touch with their fanbase, the tried and tested formula again getting them into the top end of the charts. The record also spawned a surprise hit single in the shape of a rare ballad, `Time Of Your Life (Good Riddance)’, geeing the band on to er… express a softer, acoustic side. Clocking in at just under 50 minutes and comprising 18 Billie Joe-penned tracks (including UK Top 30 hits, `Hitchin’ A Ride’ and `Redundant’), the set was definitely value for money – at least for the converted.

With the long-awaited WARNING: (2000) {*7}, GREEN DAY went ahead and exorcised those pop demons which had clearly been haunting them since way back when. By investing their punk-pop formula with a measure of melodic sparkle and a hint of vintage 60s flavour, the 3-chord thumpers had come up with their most consistently listenable album to date. If your bag was The MONKEES, SMALL FACES or The BEATLES, one could appreciate respective songs such as `Blood, Sex And Booze’, `Misery’ and `Hold On’. For purest GREEN DAY fans, the usual UK hit single fare was presented by `Minority’ (very POGUES), `Warning’ and `Waiting’.
The subsequent release of a couple of compilations might’ve made it seem that the band were marking time; in actual fact they were at work on their piece de resistance, AMERICAN IDIOT (2004) {*9}. Possibly the most celebrated work to come out of rock’s post 9/11 ferment, the album was nothing less than a politicised post-millennial rock opera, and a transatlantic chart-topper into the bargain. The Bush-blasting title track served as a lead single, setting the tone for the high charting series of singles to follow: `Boulevard Of Broken Dreams’, `Holiday’ and `Wake Me Up When September Ends’. Armstrong’s CLASH-like political commitment filtered through to the accompanying, award-winning videos, while the album itself scooped a Grammy. With two tracks (`Jesus Of Suburbia’ and The WHO/“Tommy”-ish `Homecoming’) extending to over 9 minutes, GREEN DAY hadn’t exactly become prog overnight, it’s just that they had a lot of angst and passion to express.

After being voted Best Show On Earth in a Kerrang! poll, the trio’s semi-legendary Milton Keynes Bowl summer 2005 double-header was officially released later that year as a CD/DVD package, BULLET IN A BIBLE {*7}; seguing The ISLEY BROTHERS’ `Shout’ to the breakneck `King For A Day’ was visionary indeed.
Taking time out to deliver on other projects (the band contributed their take of LENNON’s `Working Class Hero’ to the `Instant Karma’ charity album in 2007 and were animated for The Simpsons Movie), it would be some time until their next GREEN DAY set. Meanwhile, the Californian boys unveiled a new side-project, FOXBORO HOT TUBS, a 60s-fashioned garage outfit that also featured seasoned keys and sax-man (brother of VANDALS’ Josh) Jason Freese, plus Kevin Preston and Jason White on guitars. Reminiscent of British Invasion bands of the mid-60s (you name them they’re here) or even The JAM and ARCTIC MONKEYS, the 12-song STOP DROP AND ROLL!!! (2008) {*6} might well’ve impressed not only the youth of today, but their grandfathers; examples are in `Mother Mary’, `Red Tide’ and `She’s A Saint Not A Celebrity’.

Back on the GREEN DAY track in 2009, the transatlantic chart-topping 21st CENTURY BREAKDOWN {*7} was as brash as it was tempered, proof in the pudding were the contrasting `Know Your Enemy’, `East Jesus Nowhere’ (very MARILYN MANSON) and `Christian’s Inferno’ to the softer `Viva La Gloria!’, the lullaby-esque `Before The Lobotomy’ and `Last Night On Earth’.

As fans of both The WHO and QUEEN, it was indeed always on the cards that they would adapt their songs for stage and screen. And what better album to choose than their classic rock opera, AMERICAN IDIOT (2010) {*7}, now an Original Broadway Cast double set with GREEN DAY performing as the house band. Complemented by other faves from various sets, it certainly portrayed the punk-pop trio as dextrous. Live souvenir CD/DVD package, AWESOME AS F**K (2011) {*6} marked time as the triumphant trio charted out their next plan of action.

Just when you’re awaiting one proverbial bus, another two come along in quick succession. This was the case for GREEN DAY’s 2012 “Sandinista” trilogy: “!Uno!”, “!Dos!” and “!Tre!” – difference was Billy Joe and the boys split them into individual packs of three. Accusations of CLASH copycats were rife and not exactly Chinese whispers on their “Safe European Home” riffs on the opening tracks (`Nuclear Family’ and `Stay The Night’) from !UNO! {*7}; chants of “last gang in town” on `Rusty James’ didn’t exactly help matters.

Punk was way past its three-chord sell-by-date on both !DOS! {*7} and the poppier !TRE! {*6} and, with Armstrong unable to fulfil touring commitments when suffering a breakdown shortly after the first LP, and his subsequent admission into rehab, the pair of follow-ups sold in ever decreasing numbers. Saturation and obstinate self-indulgence would be words bandied about in the space of the three months (September to December) that occupied GREEN DAY’s return, but fans of the punk band could still reel in the old days through “!Dos!”’s `F*** Time’, `Wild One’ and `Stop When The Red Lights Flash’ and “!Tre!”’s `Missing You’, `Sex, Drugs & Violence’ and `X-Kid’.

And then came FOREVERLY (2013) {*6}. As joint ventures or C&W duos go one can’t think of many more offbeat than BILLIE JOE + NORAH [JONES]. Following in the well-heeled footsteps of BONNIE `PRINCE’ BILLIE and DAWN McCARTHY a year earlier for another exhumation of the works of The EVERLY BROTHERS (via “Songs Our Daddy Taught Us”), this record certainly had the marmite effect on critics. Flattening, or almost quiffing his grease-ball mane of jet-black hair, it was down to an acoustic Armstrong and the jazz-turned-C&W lady (who’d performed in The LITTLE WILLYS) to recreate the 50s in our living rooms. If Don and Everly had teamed up with PATSY CLINE or LORETTA LYNN, that might’ve been poignant in its day, but with today’s cut ’n’ thrust teens, songs our great-great-granddaddy’s taught us (with the exception of `I’m Here To Get My Baby Out Of Jail’ and `Roving Gambler’) probably won’t cut it. Sadly, the Top 20 set was made even more relevant when the death of PHIL EVERLY was announced just after the new year.

Rounding up the best bits from their triumvirate of previous sets, fans were offered the chance to listen to GREEN DAY – as if in 1994 – on 2014’s Record Store Day exclusive DEMOLICIOUS (2014) {*7}. A surprise package indeed.

A dozen years on from their frothy “American Idiot” opus, rehab-rebounding Billie Joe and his GREEN DAY hombres were pushing out the envelope to create their “Retro-phenia” on REVOLUTION RADIO (2016) {*9}. Whilst the raucous and rebellious `Bang Bang’ swiped the angst of The CLASH in their punk-rock heyday, one could imagine they’d just popped out of their spare-car garage for the dynamic DeLorean-esque title track, the chanthemic `Say Goodbye’ and the spiky `Youngblood’. If one was looking for breath-taking ballads or anything close, the nice-enough-to-eat `Outlaws’ and drama-riddled mini-opera `Forever Now’ proved beyond doubt GREEN DAY still had it in spades. From the opening WHO-like `Somewhere Now’ and the soft-centred anchor `Ordinary World’, to the foreboding `Troubled Times’, `Too Dumb To Die’ and `Bouncing Off The Wall’, one couldn’t pick out a faulty track. 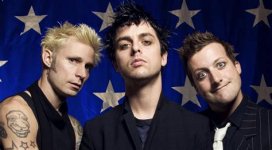