Staff member
For me this a great album forming with previous "Mountain Grill" and "Warrior" and the following "Quark etc." the basic tetralogy of Hawkwind's 70s works. But this work is sometimes forgotten or underrated when compared with the three other cited before.

Lemmy is not more responsible for the bass, but Brock is still there, as always, with other former members and now the band counts with Robert Calvert, appearing yet timidly but showing that he will be the mind behind Hawkwind's near-future.

Production is fair as well as the musicianship: two points ever criticized when talking about Hawkwind. They found some interesting solutions for making voices heard amidst the sound explosion that's the band signature.

Songs are average or better with few exceptions.

'Reefer madness' is a good opener, with synths providing a plethora of strange effects and the guitar in the frontline just like a good rock must be, the bassline is correct - and attention to the lyrics with all controversy around it.

'Steppenwolf' is one of the greatest Hawkwind songs, with drums, keyboards and vocals starting in a Santana mood, changing for a more psychedelic tune as the song advances; anyway a Latin taste is ever-present.

'City of lagoons' is a bluesy one, but the background is spatial - a space-blue; but this instrumental piece adds few compared with the first tracks.

'The aubergine that ate Rangoon' also instrumental, has a great title and little more - sometimes is dull.

The last 3 songs make the album return to the rails - I mean, Hawkwind's rails, starting with 'Kerb crawler' a shaking rock song, in the middle of the road between softness and madness; 'Katmandu flyer' is funny and hearable and the disc ends in great shape with 'Chronoglide Skyway' one of my preferred Hawkwind instrumental songs: good keyboards, pleasant sax effects, nice guitar riffs all with a good support by the bass& drums duo.

Yes, the CD release includes 3 bonus tracks but only the relatively short 'Honky Dorky' is worthy with the characteristic band psychedelic sound.

This is really a good album but I don't think that it could be rated as non-essential; it's more than it, the absence of Lemmy, the debut of Calvert transform "A.S.A.M" into a landmark and valuable addition to any prog collection. 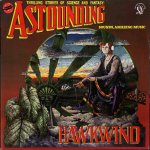