Staff member
Hawkwind's 80s albums are certainly a different approach to the 70s but there are still some great moments on these releases as is the case with "Choose Your Masques". The album features some wonderful compositions with excellent lead guitar breaks such as 'Arrival in Utopia' and 'Utopia'. Dave Brock and Harvey Bainbridge on vocals are effective. Bainbridge's bass and keyboard work is well executed here. Huw Lloyd-Langton is a fine lead guitarist as is evident on tracks such as 'Solitary Mind Games'.

'Choose Your Masques' is another great song with a driving rhythm and hypnotic melody. This sounds more like the old Hawkwind when they locked into one riff and sung variations of a simple melody. At over 10 minutes in length it overstays its welcome but is still a decent start to the album with some trademark spacey effects by Dik Mik and tons of lead guitar. It was also a treat to hear Ian Holm's narration, sounding like his "Alien" character Ash. This segues into 'Dream Worker' that has some nice weirdness to open it, a swathe of synth layers and dreamy ambience. It does not go anywhere but still somehow works as a transition into the Utopia tracks.

Unfortunately the band are prone to diverge into the new wave punk territory such as on 'Farenheit 451', and I am turned off by this approach. The band should stick to the spacey vocals of Brock. Nik Turner is the culprit again on this release and is a real nutter live and comes across as such on vocals, though there is no replacing his wild sax embellishments. It is nice to hear Brock's wife here too, Pascoe, singing occasionally. The album cover is not that good either looking like a dead Jawa.

There is as usual a lot of instrumental filler here such as 'The Scan' that is just a keyboard solo, and this leads to 'Waiting For Tomorrow' with a nice drone intro, spacey lead guitar and some interesting softer vocals. There is an over abundance of space effects as if the band are trying to revisit the good old days. 'Void City' is an interesting take on "The Outer Limits" TV show; "there is nothing wrong with your television set, we will control the horizontal, we will control the vertical". The track is basically another instrumental with repeated synth motifs and some space squirls and kanoodling. It goes for too long and is rather dull after a while, sounding like Sigue Sigue Sputnik's style.

To cap things off on revisiting old territory, there is a version of 'Silver Machine' that sounds really desperate to recapture that magical track. It does not work though with Brock's vocals sounding a bit forced. The lead guitar intro is unwelcome, and it has a different feel in the chorus. Admittedly it is one of the better tracks due to the fact that I always liked the melody but it still felt very unnecessary. On here there are two versions, a short and longer version. I recommend the longer version simply to hear the instrumental section. Overall the album is okay but once again Hawkwind are not the powerhouse of space rock that they once were. Grab this though as an example of the new Hawkwind sound, and it is better than a lot of their other 80s releases and for that matter better than most of the 90s output. 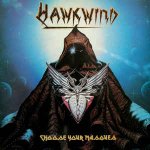